Justin Haskins
|
Posted: Sep 17, 2018 12:01 AM
Share   Tweet
The opinions expressed by columnists are their own and do not necessarily represent the views of Townhall.com. 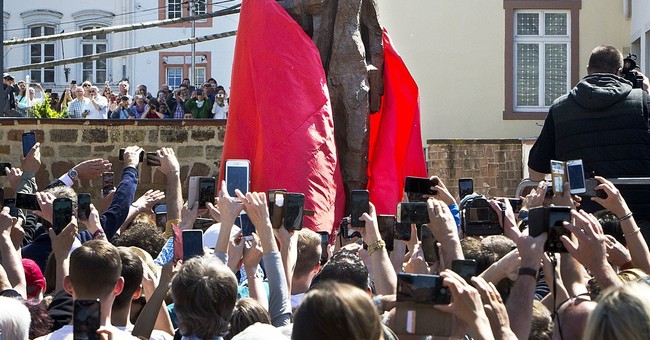 Over the past six months, increasingly more Democrats have cozied up to socialism: Self-described “democratic socialist” Alexandria Ocasio-Cortez is almost certainly going to become New York’s newest congressional representative; the far-left mayor of Tallahassee won the Democratic primary in Florida’s gubernatorial race; and a new Gallup poll revealed 57 percent of Democrats view socialism positively. (Only 47 percent said they have a favorable view of capitalism.)

Most Democrats who say they like what socialism has to offer are probably completely ignorant of the history of socialism; when they think of “socialism,” they imagine the pristine streets and smiling faces of Scandinavia, not the gulags of the Soviet Union. But many in the Democratic Party’s leadership who espouse the alleged “benefits” of socialism are aware of how utterly horrific this ideology has been for people around the world—from Asia to South America to Nazi Germany—but they continue to insist that the failed attempts at socialism in places like Venezuela aren’t truly representative of what Karl Marx taught. If only we could build a Marxist-socialist society as Karl Marx himself imagined, they say, the world would be a much better place for everyone.

What Sen. Bernie Sanders (I-Vt.), Ocasio-Cortez, and other lovers of socialism don’t spend much time doing, however, is telling people what Marx actually called for. Instead, they make delusional promises about building a future world led by genius, totally altruistic bureaucrats and “community leaders” who will keep income inequality in check by redistributing wealth. Why is it, though, that they don’t talk about the things Marx himself did? Why don’t they quote him directly? Probably because if they did, the world would see just how radical and disturbing Marx’s socialism really is.

Socialism isn’t really about providing people with free college and universal, government-run health care. Socialism aims to impose a complete transformation of the Western world by eliminating the ownership of most—or, depending on the socialist you talk to, all—forms of private property. Instead of individuals owning businesses, land, and natural resources, the “collective” would own them and democratically make decisions on behalf of everyone.

This is incredibly dangerous for a variety of reasons, but two in particular deserve the most attention. The first is that in order to have such a world, a radical, highly immoral revolution would need to occur that would strip all people of their rights. And you don’t have to take my word for it, either, because Karl Marx himself agreed.

In the “Communist Manifesto,” Marx wrote that his form of socialism would necessitate making the workers of the world a “ruling class” who could seize the property away from all who own it: “If the proletariat [working class] during its contest with the bourgeoisie [those who control most property] is compelled, by the force of circumstances, to organise itself as a class, if, by means of a revolution, it makes itself the ruling class, and, as such, sweeps away by force the old conditions of production, then it will, along with these conditions, have swept away the conditions for the existence of class antagonisms and of classes generally, and will thereby have abolished its own supremacy as a class.” As Marx also notes, “in the beginning, this cannot be effected except by means of despotic inroads on the rights of property …”

A second extremely serious problem with socialism is that if you have a society in which virtually every important economic decision is made by the collective, then minorities will inevitably be mistreated, exploited, and abused. For instance, in a world where the medical system is collectively owned, devout Catholics would be compelled to become part-owners of every condom factory and abortion clinic, even though they are deeply opposed to such activities. Hindus would be forced to become part-owners of every slaughterhouse, even though many of them oppose killing animals. Mormons would be forced to pay (directly or indirectly) for every alcohol distillery, even though many of them believe people shouldn’t consume alcoholic beverages. And the list goes on and on.

Even in Marx’s wildly idealistic socialist model, which assumes a tyrannical regime eventually is replaced by a peace-loving “collective” form of decision-making, you still up with a despotic tyranny of the majority!

Socialism is an incredibly dangerous, highly immoral idea. That’s exactly why myself and a team of other supporters of individual liberty have created StoppingSocialism.com, a website dedicated to directly combating Karl Marx’s ideas and preventing America from becoming the world’s next socialist state, and authored “Socialism Is Evil: The Moral Case Against Marx’s Radical Dream.” We hope you’ll share this article and take some time to talk to your kids, friends, neighbors, and coworkers about the threat of socialism. Together, we can stop collectivism in its tracks!

Justin Haskins is the co-founder of StoppingSocialism.com.