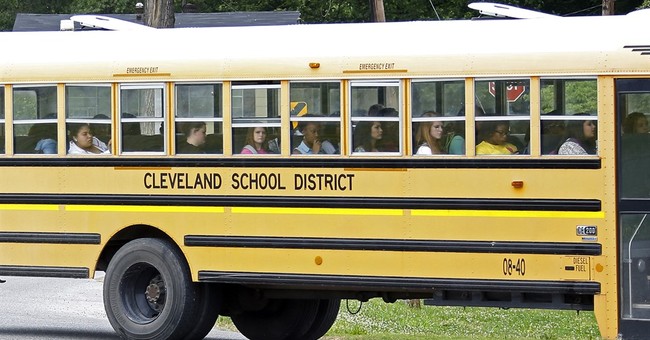 Although we often hear about distinctive American features such as apple pie, baseball, and freedom of speech, the single greatest characteristic of the American way is the willingness to provide opportunity for all. Unlike its European predecessors, the United States was always meant to be a place where your standing in the world isn’t determined by who your parents are but rather by an unrelenting spirit.

The American public education system was born in that context. The idea is simple enough: A child’s future shouldn’t be determined by what has been given him or her. It should be the product of hard work mixed with talent and opportunity. Because not every parent has the means to provide their children with the schooling needed to build success, communities joined together to form education systems to benefit the entire nation.

Although this is unquestionably a noble goal, the rise of government-run schools has created a class of bureaucrats and opportunists seeking to benefit from a seemingly endless flow of tax dollars. They have hijacked public education and established a system with a primary focus on increasing teachers’ benefits, protecting school administrators, and mitigating the rights of parents, rather than educating kids.

Those who advocate for liberty have been particularly dismayed in recent months as they have watched the Supreme Court (SCOTUS) decide in King v. Burwell the plain language of the Affordable Care Act is meaningless and the 10th Amendment, which protects the rights of states and limits the power of the federal government, apparently does not apply to marriage, despite more than 200 years of judicial precedents saying otherwise.

Although SCOTUS has asserted itself as the most powerful institution in the nation over the past few years, and unjustifiably so, the real problem for the pro-liberty movement is the U.S. political, legal, and cultural environment that tolerates and even encourages such an unconstitutional power grab. And the root cause of that environment is the American public education system.

From the time our children enter kindergarten until they graduate high school, they are indoctrinated into believing everyone deserves a trophy just for participating; that everyone, no matter how little they apply themselves, deserves to move along to the next grade; and that Franklin Delano Roosevelt, a man who forced roughly 100,000 Japanese-Americans to live in concentration camps, is America’s greatest president.

Kids are forced to walk in single-file lines, 18-year-olds are often required to ask permission to use restrooms, and “silence is golden” posters abound. In short, American children are trained to be mindless, homogeneous, public school drones.

Children aren’t even allowed to decide their own salt and sugar intake (with their parents’ guidance, of course), which has led to quasi-black markets forming in school cafeterias in an effort to battle bland food, as reported by The Heartland Institute, a leading pro-liberty think tank for which I work.

Although some conservatives may be tempted to blame President Barack Obama and the Democrat Party for many of these problems, the crisis goes much deeper than that. I remember being subjugated to these very same absurdities in public schools I attended in New Hampshire more than a decade ago, in a region no one would say was a haven for leftism. Even the anti-health-food black market movement was alive and well then. I can remember my closest friend in high school, Nick Alenskis (now an Army Ranger), building a profitable black market soda business, exchanging cases of Mountain Dew in the darkest corners of the school’s hallways in exchange for milk money.

Looks like Nick really was the visionary he always said he was.

Liberalism, which is really nothing more than the belief that government officials are more intelligent, responsible, and compassionate than the average person, is no longer some abstract ideology competing with other philosophies in the marketplace of ideas. It is now the standard, default position ingrained in children beginning in their youngest years. And it’s no coincidence the public education system has adopted such a philosophy.

Following the rise of radical liberalism in the 1960s, the left made a concerted effort to revolutionize various social and government institutions, with the education system as one of its primary targets. Leftists flooded academic institutions and influential organizations and nonprofits, using their positions to transform educational standards.

Perhaps the perfect example of this is Bill Ayers, a domestic terrorist, self-proclaimed Marxist, and former distinguished professor of education at the University of Illinois-Chicago. Ayers not only has been an influential peer-reviewed academic, he’s been actively shaping U.S. education for decades.

That is how Marxism has become a staple of U.S. education to varying degrees, even in traditionally conservative regions. Nor should it be surprising that studies show as few as 16 percent of college faculty identify as “conservative.”

The best and perhaps only realistic way to battle these overwhelming odds is to implement and expand school choice programs. Those who support liberty could open their own schools, giving pro-liberty parents much more power in determining their children’s education. If teachers preach absurdities, as they have a tendency to do at times, parents would be able to remove their kids from those toxic classrooms.

Currently, that ideal situation is only a dream, but with advancements such as those recently made in Nevada, which will soon offer its students the nation’s first nearly universal school choice program, there is real hope conservatism will have a chance to prosper in the future. This, however, is dependent on the pro-liberty movement’s willingness and commitment to rebuilding education from the ground up. If conservatives don’t make this a priority, there won’t be any liberty left to protect.