What To Be Thankful For? 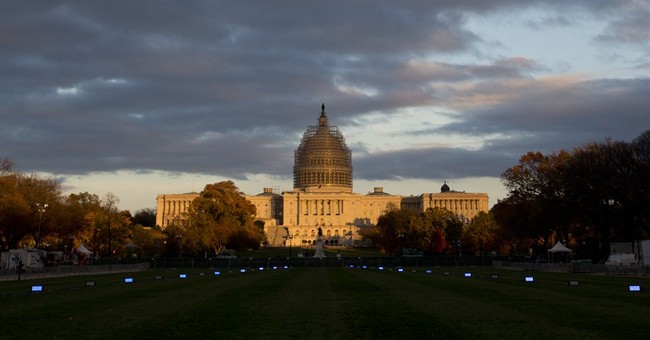 What if the government is designed to perpetuate itself? What if the real levers of governmental power are pulled by agents and diplomats and bureaucrats behind the scenes? What if they stay in power no matter who is elected president or which major political party controls Congress?

What if the frequent public displays of adversity between the Republicans and the Democrats are just a facade and a charade? What if both major political parties agree on the transcendental issues of our day?

What if the leadership of both parties give only lip service to Thomas Jefferson's words in the Declaration of Independence that each of us is "endowed by (our) Creator with certain inalienable rights, (and) among these is life, liberty, and the pursuit of happiness," and that the purpose of government is to protect these rights? What if the leadership of both major political parties dismiss these ideas as just Jefferson's outdated musings? What if Jefferson's arguments have been enacted into the federal laws that all in government have sworn to uphold?

What if the leadership of the two major political parties believe that due process permits mothers to kill the babies in their wombs out of fear or convenience? What if the leaders of both major political parties believe that the president should be able to kill whomever he wants out of fear, because due process is an inconvenience? What if President Obama killed Americans and claimed that he did so legally, relying on the convenient arguments of his attorney general, who falsely told him he could kill? What if the Constitution requires due process whenever the government wants someone's life, liberty or property, whether convenient or not?

What if the congressional leadership and most of the membership from both political parties believe in perpetual war and perpetual debt? What if the history of America in the past 100 years is proof of that nearly universal belief among the political classes?

What if the political classes have been paying for prosperity by increasing the government's debt? What if those classes have controlled the cash-creating computers at the Federal Reserve and the free cash the Fed creates is to bankers and traders what heroin is to addicts? What if the $17.5 trillion current federal government debt has largely been caused by borrowing to pay for war and false prosperity?

What if the silent damage that the artificial creation of cash causes has not been manifested in price inflation but in equity and savings deflation? What if the manifestation of equity deflation is that too much of everything we own secures too much debt? What if the folks at the Fed who create the cash have kept interest rates so low that there is little incentive to save?

What if we all own a smaller percentage of what we think we own because the value of what we own has decreased as the debt on what we own has increased? What if the banks have borrowed the money that they lend? What if the stock market is soaring on borrowed money? What if mansions and shopping malls are popping up, but they secure more debt than they are worth? What happens when the plug is pulled on this temporary artifice as those debts come due?

What if the government stays in power by bribery? What if it bribes the rich with bailouts, the middle class with tax cuts and the poor with welfare? What if the courts approved this bribery?