Joy Pullmann (jpullmann@heartland.org) is a research fellow of The Heartland Institute and managing editor of School Reform News, a national monthly publication. In that capacity, she has interviewed and produced podcasts with many of the leading figures in school reform. She previously was the assistant editor for American Magazine at the American Enterprise Institute.

Pullmann has taught middle and high school students history, literature, and debate, and wrote high school public speaking curriculum. She has traveled nationwide to speak at prominent venues including CPAC, the National Right to Life Convention, and statewide education conferences. She has been a guest on numerous talk shows, including theWall Street Journal's Opinion Journal.

Pullmann graduated from the Hillsdale College honors program with an English major and journalism concentration, where she received statewide competitive collegiate honors for her reporting and commentary and ranked in the top 25 nationally in parliamentary debate. 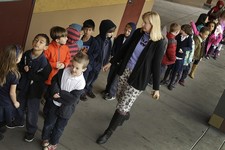 School Lunch Expansion: Another Wasteful, Unaffordable Entitlement
By Joy Pullman
Soon, all public schools will be allowed to enroll all students, regardless of need, into a new federal entitlement: “free” ...
November 05, 2013
Pensions Are Cannibalizing the Nation’s Young People
August 20, 2013 |