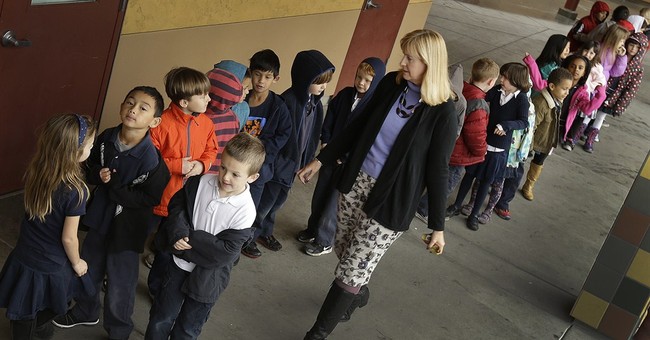 Soon, all public schools will be allowed to enroll all students, regardless of need, into a new federal entitlement: “free” school lunches. This is the second year of a three-year rollout for the program, embedded in Michelle Obama’s Healthy, Hunger-Free Kids Act. As the 2010 law goes into effect, families keep finding the lunches aren’t necessarily healthier, new calorie limits can mean older and athletic kids go hungry, taxpayer costs have spiked, and piling on new food welfare programs continues to make more poor kids fat.

This year, 11 states qualify for the “Community Eligibility Option.” If more than 40 percent of their students are eligible for federal lunch subsidies called free and reduced-price lunch, they can put all the kids into the program. That’s right: Schools don’t even need most of their students to register in the “low-income” category to enroll every single one into food welfare.

This country just witnessed a 16-day government shutdown because we can’t afford to pay for existing entitlement programs. It’s insanity to create another entitlement for families that can afford to provide lunches for their children.

I joined Fox News recently to discuss this entitlement expansion. Besides many unprintable emailed responses, I received one from a Florida teacher:

“Supposedly hungry children would take a tray of breakfast food. They would open the pint of milk, take one sip. They would receive a beautiful piece of fruit (apple, banana, pear) and not touch it or maybe take one bite. … They did not eat 10 percent of what they received,” she wrote. “I began asking them why they weren't eating. Many stated they’d already eaten at McDonalds that morning or ate cereal at home. When I asked, ‘Why are you getting free and reduced breakfast?’ They would shrug their shoulders. They didn’t know. Just expected it.”

When this teacher attempted to reduce the waste by collecting uneaten food and encouraging kids to share, the school cafeteria refused to serve it again because it was against government regulations. For the same reason, a homeless shelter wouldn’t accept the food as a donation. So teachers began taking home bags of fruit, unopened milk containers, and other items each day.

“Finally, after about three weeks, the principal came to me and told me to stop because they had a budget they had to spend. If they didn’t spend it, it would be reduced,” the teacher wrote. “If the kids aren’t eating it and it’s going in the trash, then you don’t need that much in your budget.”

Federal school lunch (and now breakfast and an afternoon snack) is a story of big government and big agribusiness colluding to create a program that benefits them at the expense of hungry children and working adults. Food welfare became national decades ago in an agreement between rural and urban lawmakers that ensured each would continue to vote for the other’s pet entitlements: welfare and agribusiness subsidies (which raise the price of food for everybody). There is no reason local communities and states cannot supply school lunches to the truly needy—except that would make it harder for lobbyists to influence the rules to fatten their wallets, regardless of whether the rules make any sense for all kids and schools.

Our nation must make choices regarding government spending, and this should be an easy case: Let’s get back to helping only the truly needy. No child will go hungry if this program is not expanded, or if it is scaled back to let those who see these kids each day judge their nutritional needs.

Joy Pullmann (jpullmann@heartland.org) is managing editor of School Reform News and an education research fellow at The Heartland Institute.