Joy Overbeck
|
Posted: May 21, 2018 12:01 AM
Share   Tweet
The opinions expressed by columnists are their own and do not necessarily represent the views of Townhall.com. 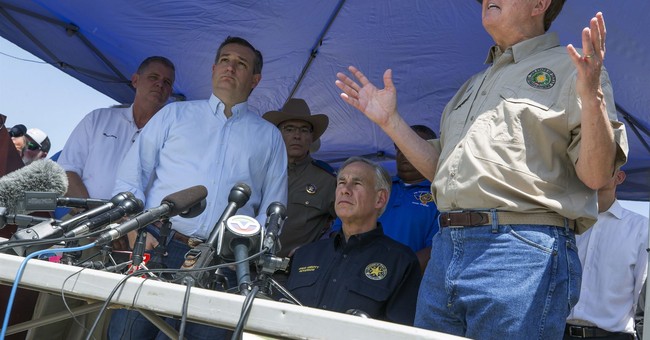 As the horrific events at Santa Fe High school unfolded, all the usual experts popped up on TV panels and interviews once again recycling their “never again” and “we’ve-gotta-do-something” solutions. These are respected authorities like former DOJ special agents, sheriffs, former NYPD detectives, and parents of children killed in previous school shootings.   And not one single thing they recommended to stop school massacres will work.

His schoolmates knew he was nuts. Yet over a year ago the 19-year-old  somehow passed “background checks” and legally purchased the rifle he used to kill 15 students, a teacher and a coach at the school from which he had been expelled. In response to their failure, the FBI has promised to “take corrective actions.” And the Florida legislature passed a law that you must be 21 to buy a firearm.  Yeah that’ll help.

In a larger context, most of the privacy laws in the nation would need to be erased in order to access an individual’s medical or psychological records. And, honestly, is there a teenager who doesn’t have mental health problems? These are young people in the emotional maelstrom years. Exacerbating their immaturity, confusion and psycho drama, they often smoke weed which is six or seven times as strong as their parents’ weed and hardly conducive to metal stability. These kids eat Tide detergent pods and steal their parents’ meds. They are tossed and tormented by their chaos-inciting hormones. They play video games that give them instructive practical target practice in annihilating enemies – rehearsal for real life school massacres. And good luck with the entertainment industry scaling back video or film violence out of the goodness of their hearts.

None of these fixes have worked in the past, and none of them will work in the future. It takes but a minimum of common sense to realize the only way to stop a murderer shooting school-kids is another shooter who threatens or kills the murder. The timeline is quick; most often the killing is over before law enforcement can respond. It takes only moments to kill lots of people. The average time of these lethal events is 3 to 4 minutes – it took the Parkland shooter under seven minutes to take 17 human lives. And since the killing takes place inside the school, it only makes sense that’s where the defenders must be.

The only intelligent, sane voice was Texas Lieutenant Governor Dan Patrick who said on the Friday of the shooting he and Governor Abbott visited the wounded and their parents and classmates who “all to a person said ‘our teachers should be armed.’” Patrick speculated that an ex-Marine who taught in the classroom adjacent to the one the killer shot up may have been able to stop the shooter had he been armed. Though there were two armed officers on the campus, Patrick pointed out “four or five guns to one” is preferable to one or two.

Leftists who refuse to allow willing and well-trained teachers to protect their students reveal to all that their compassion is nothing but hollow hypocrisy. What parent in the world wouldn’t rather their child have a chance against a killer instead of being shot dead cowering in a closet, like those poor kids in Texas.

Teachers are already protecting their kids with their bodies and dying along with them – two at Santa Fe High School, two at Parkland, and six at Sandy Hook. Yet their union leaders like American Federation of Teachers President Randi Weingarten are more than willing to sacrifice the lives of the 1.7 million educators the AFT represents to gun-hating liberal mythology.

Following President Trump’s proposal to arm teachers after Parkland, this woman said she spoke to 60,000 educators in a telephone town hall. “The response was universal,” she insisted, “even from educators who are gun owners. Teachers don’t want to be armed…we would never have the expertise to be sharp shooters…”  And her preposterous drivel continues: “would kindergarten teachers be carrying guns in holsters? When you have seconds to act...is a teacher supposed to use those seconds getting her gun instead of getting her students to safety?”

But when a school suddenly becomes a war zone, there is no safety except behind a teacher or staff member with a gun. And Weingarten is wrong about teachers being unwilling to defend their students and themselves; they’re not nearly as suicidal as their union boss thinks. In a March 5-8 poll Gallup found that about one in five teachers would take their school district’s required training and carry a firearm in their schools. One-quarter of all the teachers currently own a gun, and unsurprisingly they were four times more likely than those who don’t to volunteer to be trained to carry in school. While the left promotes the lie that teachers just are too incompetent to defend their charges, two-thirds of those who want to carry said they are very confident they would be effective in a shooter situation, while one-quarter are somewhat confident. Since they already own guns, some for many years, they’re not self-defense newbies nor are they likely to believe leftist anti-gun propaganda and prejudice. Think: If one in five classrooms has an armed teacher, the odds for students’ survival dramatically improve.

In another March Gallup poll, the number of people who thought arming teachers and other school officials would be effective in stopping school shootings (47%) were exactly even with those who didn’t (53%) when accounting for the 3% margin of error.

Despite the media’s mocking and belittling arming teachers as dangerous and foolhardy, those who have actually dealt with these tragedies rejected leftist irrationality when the Parkland victims’ family members all signed a statement supporting the Florida bill that, among other things, provides millions for training and arming teachers.

The terrible irony is that since 2012 Texas has been one of the 30 states allowing trained and willing teachers to carry firearms in their schools. Yet only about 170 school districts out of the over 1,000 in the state have authorized these programs. And Santa Fe isn’t one of them.