How Cruz Wins This Thing

Joy Overbeck
|
Posted: Apr 02, 2016 12:01 AM
Share   Tweet
The opinions expressed by columnists are their own and do not necessarily represent the views of Townhall.com. 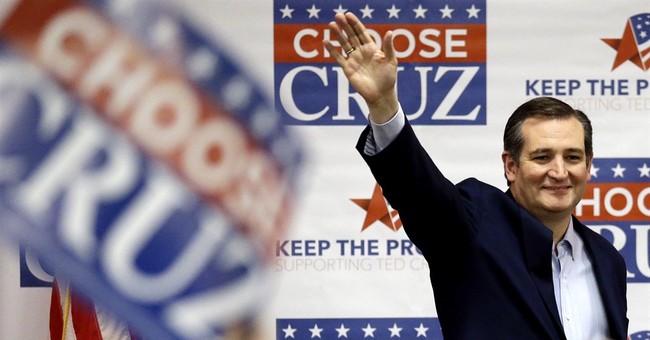 Facts and stats have won Senator Cruz many victories at the Supreme Court but they don’t connect with   American voters. Yes, say that government over-regulation is killing jobs, and yes, pledge to repeal and replace Obamacare, but then put some meat on those dry bones. Talk about the young mom I know with two daughters who lost her health insurance just after her divorce at the same time she found out multiple blood clots would force the amputation of her leg. She was frantic, desperate; in need of real help, not the fraud that is Obamacare.

Says Jen, “Obamacare made all these false financial promises to our state co-op which went bankrupt as a result. So I went from responsible mom with my own business, car paid for, small mortgage, college funds for both kids – to over $7,000 a month in medical-related debt that will continue for the foreseeable future with my ongoing health problems. I might have to declare bankruptcy.”

There’s an respected adage among novelists and screenwriters: show, don’t tell. Anytime you talk about ripping up Obamacare, use stories like Jen’s.  Anytime you say the punishing  EPA/Obama rules are driving the coal industry out of business, have a group of coal miners behind you onstage with their wives and little kids. Let the audience hear from these proud, hard-working men who can’t feed their families because the government has literally eliminated their jobs. Let them describe how their towns have been picked clean of businesses and emptied of neighborhoods by the Democrats’ job-killing war on coal. In upcoming debates, use their stories and name their towns.

Use what the Democrats have always known: personal stories are the most powerful way to connect emotionally with voters. When you connect emotionally with voters, you win their hearts and minds. And votes. That’s why Democrats always come up with heart-rending anecdotes, and why Obama surrounds himself in every bill-signing ceremony with warm bodies – women, the poor, blacks, people with illnesses but no insurance. Just having them standing there is a highly effective ad that says: Look how much we liberals care about you unfortunates; see the amazing, life-giving magic we are working for you!

The truth is none of the Obama fixes are working. According to Gallup’s March poll, only about one-fourth of Americans are satisfied with what’s going on in their country. Their main worries are the economy, dissatisfaction with government, unemployment/jobs and healthcare. That is, the Barack/Hillary agenda. So keep hammering away at those top issues, but bring them dramatically to life  with personal accounts of people and businesses who’ve been harmed or actually ruined by twisted  leftist schemes.

Since Barack Obama and Hillary Clinton are two heads of the same mega-government monster, Obama’s destruction of American jobs and opportunity would just accelerate with Hillary. But voters were similarly unhappy with Obama’s “fundamentally transforming America” in 2012, so why did they re-elect him?  Because it’s not all about policy.

Basically, they just liked him better than they liked Romney, especially after the Dems soaked the airwaves with a dastardly tale about Mitt somehow giving an ex-employee’s wife cancer.  Again, the power of story. Likeability is a baffling, bewildering, nail-jello-to-the-wall mysterious second sense based on roughly the same intellectual factors as choosing a prom king. Namely, who the voter would rather have a beer with.

When likeability clashes with a voter’s political views, often the warm-and-fuzzy wins. Thus although most Americans disliked Obamacare, ABC News reported voters would choose Obama over Romney to nurse them back to health during an illness. Amazing. When asked who they thought “would make a more loyal friend” the verdict was similar. By a 13-point margin registered voters in the poll picked their pal Obama even though that might put them in a poker game with America-hater Jeremiah Wright and criminal bomber Bill Ayres. And never mind that Obama’s actual brother lived destitute in a Kenyan hut without a hand up or a handout from the most powerful man in the world. Likability is seldom derailed by reality.

Then too it’s possible that in this election likability doesn’t matter that much; Trump has huge unfavorables over 60 percent and Hillary also gets high marks for sheer unpleasantness. Still, being likable can’t hurt. From talking to people, my own observations, and yes, Twitter bots, I make bold to offer a few unsolicited suggestions to Senator Cruz.

First, lose the lawyerly voice. It can have a harsh and lecturing edge when I’m sure its owner means his tone to be commanding and presidential. After all, his biggest Republican rival sounds like a Wehrmacht field marshal and the Democrat top contender like a Dickens-era street vendor screeching out her wares. But you can sound strong and be more persuasive at the same time with a warmer tone of voice. Pretend you’re having a conversation with a good friend. You can go a tad mellow – and you’re so good at it when you’re talking to people in a coffeehouse or café – without setting foot in squish.

People love funny. A shared laugh wins people over and helps a bunch with that likability thing.  Unleash that sly sense of humor we’ve glimpsed a few times – the debate in which you cordially advised Trump to “breathe, Donald, just breathe” comes to mind. People pour by the thousands into Trump rallies because they know he’ll be fun. His lack of substance, glaring policy contradictions, and failure to grasp the essentials of conservatism, governing, international events, and even the Constitution--his entertainment value covers a multitude of sins. But you don’t need to do stand-up; that’s Trump’s gig. Just loosen up and let your natural playfulness come through. That delightfully surprising Ted on You-Tube who nails the hilarious Miracle Max “only partly dead” scene from The Princess Bride. That Ted makes you one of us because we all love to laugh.

How to win this thing? Tell stories, add some warmth to your strength, and let your natural humor loose.

Paid Leave is Going to Be Gone from Democrats' Spending Bill
Rebecca Downs
Joe Manchin Is the Grim Reaper for Most of the Left's Agenda Items...And He Just Killed Another One
Matt Vespa
One of the Big Lies In the Kyle Rittenhouse Case
Julio Rosas
Sen. Marsha Blackburn: Biden's Vaccine Mandate Is 'Overreach,' Moving Us to 'Socialist Agenda'
Rebecca Downs
A State Senate Votes to Overturn Parental Notification for Minors' Abortions