Joy Overbeck
|
Posted: Feb 05, 2016 12:01 AM
Share   Tweet
The opinions expressed by columnists are their own and do not necessarily represent the views of Townhall.com. 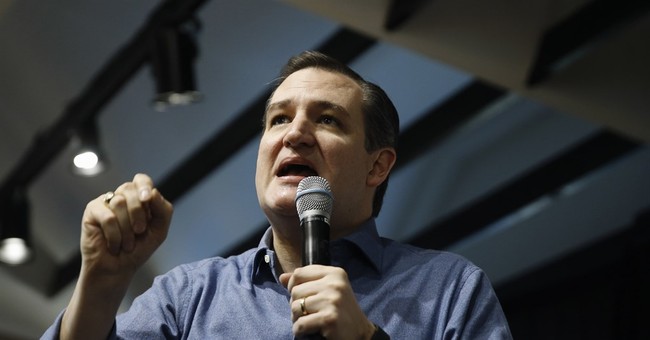 There’s a reason why nearly zero Republican Senators are rushing to the microphones to endorse Ted Cruz. Compared to his bold attempts to topple the president’s middle-class-crushing, business-squashing, government-dependency-boosting, liberty-erasing imperialism, they look like the Lollipop Guild all obediently singing to Obama’s tune. So they hate Ted Cruz.

Americans want to know why they overwhelmingly voted to send Republicans to Congress to smash a presidency that nearly 67% oppose and they’re furious that it seems nothing is ever done. Except by Ted Cruz.

Senator Cruz led the fight against the Gang of Eight Bill that would have essentially handed amnesty to millions of illegals and was to be Marco Rubio’s signature legislation. He successfully argued a number of first and second amendment cases at the U.S. Supreme Court, including to keep “under God” in the pledge of allegiance and defending Americans’ right to bear arms.

He’s authored more than 80 U.S. Supreme Court briefs and argued nine times before the U.S. Supreme Court, including upholding U.S. sovereignty against the authority of the UN and the World Court. He loves the Constitution and would keep his presidential oath to uphold it.

This obese bill was probably the most crucial vote of 2015. Its passage poured our taxes into much of what Republican voters are furious about: $286 million to fund more baby-dismembering by Planned Parenthood; no rule-tightening on vetting refugees for possible terrorism; funding Obama’s preposterous climate change regs increasing energy costs; more fat tax-payer subsidies for solar and wind; continued government grants to sanctuary cities, and other asinine Obama-centric provisions. This bill is a disaster for our nation.

Senator Harry Reid (Republicans will be shocked to hear he’s no longer Majority Leader but, mimicking his boss, behaves like he’s in charge) gloat-Tweeted that Democrats had realized all of their goals. The in-name-only but actual Senate Majority Leader Mitch McConnell congratulated his colleagues, bleating: “The Senate has wrapped up a successful year under new leadership, and we achieved some significant bipartisan accomplishments, including the measure we passed today.” Arrrgh.

Memo from real world to McConnell: “bipartisan” is just a weasel word for “the Democrats win again.” The single “accomplishment” of the Republicans in this bill was to lift the ridiculous crude oil export ban.

That wasn’t enough for Ted Cruz who decried the legislation saying it “effectively forfeits our massive Republican victories of 2014 and cements Obama’s priorities for nearly the full remainder of his term.”

Ted Cruz gets it. We the People voted to put the Republicans in charge of the Senate and the House and steamroller Obama’s policies like they were so many Roadrunners. We are not interested in watching more useless committee hearings into this corrupt government’s gun-running in Fast and Furious, on the illegal use of the IRS to club dissenters into submission, on indictment-worthy Hillary Clinton emails and traitorous abandonment of her duties as secretary of state that cost American patriots their lives. We want action not more brain-numbing blather and excuses.

On his Morning Joe MSNBC show recently Joe Scarborough asked Rick Santorum, who had just dropped out of the race and endorsed Rubio, to name one accomplishment in his four years in the Senate. Santorum huffled and shuffled, finally: “he included something that went after the insurance companies in the most recent omnibus. He fought for that, to stop bailing out insurance companies.” That claim is also touted in a pro-Rubio campaign ad from Conservative Solutions Pac, and it’s an untruth that the Washington Post has awarded four Pinocchios.

But the main reason Santorum is supporting Rubio? He can “pull people together…this is a guy that I think can work together with people.”

Translation: “Rubio is a sweet get-along guy and Cruz is an obstinate radical.”

Former Senator Santorum, like the current crop, still hasn’t figured out that going along to get along just means getting rolled by the Democrats. More of that will kill this great country. Ted Cruz calls politicos of both parties the “Washington cartel.” After all, it was our very own Republican leader McConnell who forced the omnibus bill floor vote, denying any chance of debate over 3200 pages of important law that none of the peoples’ representatives ever got a chance to read.

An obstinate radical is just what we need now or we’ll be permanently nation-jacked. Some think that is Donald Trump. But the real radical is the solid constitutional conservative.

Ted Cruz knows his first duty is to the survival of America and our ideals, not his own self-preservation. Cruz risked his political life and was mocked and savaged by his fellow Republicans for his 2014 filibuster to defund Obamacare. But he was cheered by the people at home who finally saw a Lone Ranger literally standing up for them – for 21 hours. At the time, Cruz said that if senators listened to their voters, he and like-minded conservatives could kill Obamacare with a 100-0 vote.

In the first month of 2016 the Senate finally caught up with Cruz and vindicated his obstinacy, voting to repeal Obamacare. It was a first step, but an important one.  Though the president will veto it and an override from Congress is unlikely, the vote puts Democrats on record as solidly behind the calamitous law that is punishing millions of Americans.

The vote may mean Cruz could become less hated as his conservativism becomes more acceptable to his peers. Speaker of the House Paul Ryan is already signaling he will favor a more conservative agenda this year: “My goal is to help unify the conservative movement…so the citizens get to choose in 2016 what kind of country they want to have in the 21st Century,” Ryan said recently.

Former president Jimmy Carter, second worse potus on record, says that he'd pick Trump over Cruz as chief executive.  Why? “Trump has proven already that he's completely malleable. I don't think he has any fixed opinions that he would really go to the White House and fight for.” Regrettably, “Ted Cruz is not malleable. He has far right-wing policies, in my opinion, that would be pursued aggressively if and when he would become president." Boom.

So that’s our choice: a silly putty president that the liberals can mold in their own images, or someone with actual policies and the will to actively pursue them. I have a t-shirt. Over the words, “Right Wing Extremists” are portraits of Washington, Adams, and Jefferson. If you like those guys, you’ll love Ted Cruz.