The Founders Would Vote to Impeach Barack Obama

Joy Overbeck
|
Posted: Jan 16, 2016 12:01 AM
Share   Tweet
The opinions expressed by columnists are their own and do not necessarily represent the views of Townhall.com. 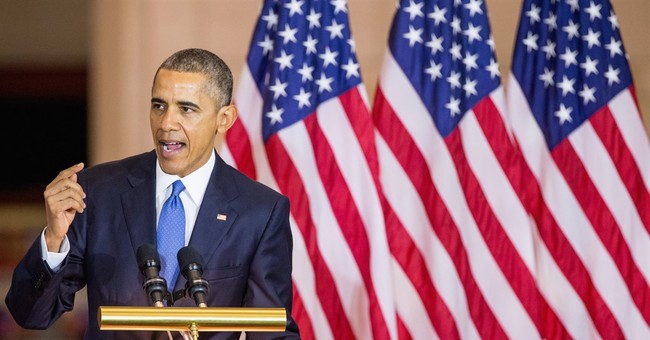 The American Founders and signers of the Constitution, despite their brilliance, failed to anticipate a president who would take the law-making powers they had given solely to the peoples’ Congress into his own hands.  After a brutal 11-year war to win a new nation from a tyrannical king, they couldn’t imagine a future leader who would don metaphorical crown and ermine robes to impose his imperial will upon a people conceived in liberty.  Also, they believed that by separating government into three branches, each with its own clearly defined roles, no one branch could usurp the power of the others. They were wrong.

As Thomas Jefferson said, “An elective despotism was not the government we fought for…but (one) . in which the powers of government should be so divided and balanced among several bodies as that no one could transcend their legal limits without being effectually checked and restrained by the others…”

But Jefferson never met constitutional expert Barack Obama. This president has seized powers light-years beyond his designated role to “take care that the laws be faithfully executed” (Article II section 3.)  This president regularly proves that the Founders’ careful construction of the founding document is no match for a determined autocrat bent on breaching its firewall of checks and balances.

Having just struggled through a long and bloody battle won against the most powerful nation on earth and finally secured “the blessings of liberty” for the people, the Framers would never have fathomed a president could have such contempt for those who died for that liberty as to systematically violate it.

A president whose Democrat minions in Congress force-passed a bill without one Republican vote that deprived the people of their freedom to make their own decisions on doctors and health care and required them to buy a government-imposed product. Unheard of. This takeover of one-sixth of the nation’s economy would have been simply beyond belief to the Founders.

They would be furious that the same overweening government would shred the Constitution’s pledge of the “free exercise” of religion by hounding a group of altruistic, care-giving nuns and many others into court to force them into supplying abortion drugs to employees in violation of their faith. Thomas Jefferson would be especially livid, having assured the worried Baptists of Danbury, Connecticut that a “wall of separation” between church and newly created state would protect them from such malicious government interference.  Yes, that wall of separation – a phrase originated ironically by the founder of the Baptist Church in America, Roger Williams, who wrote of a wall being erected around the “garden of the church” to protect it. How perverse that today this Baptist phrase is viciously wielded against believers instead of in support of their rights to free expression.

Likewise the Founders would be appalled at a president who uses the cynical subterfuge of executive orders and unelected agencies like the EPA to actually make laws, a function the Constitution assigns solely to the peoples’ elected representatives in Congress. Even more outrageous; he makes new laws that the Congress has specifically rejected or refused to pass. He calls it his “We Can’t Wait” campaign.

The peoples’ representatives refuse to pass Obama’s “comprehensive immigration reform” so his arrogant response is to declare 5 million illegal aliens temporarily “legal.” Twenty-six states sued, and last February federal Judge Andrew Hanen ordered the government to immediately stop issuing work permits to these illegals. But this slap-down didn’t stop Obama. His Department of Homeland Security passed out 2,000 green cards to illegals (about 100,000 had already been issued) after Hanen’s injunction in direct disobedience to the judge’s court order. An outraged Judge Hanen declared he was “shocked and surprised at the cavalier attitude the Government has taken” and demanded to know why Homeland Security chief Jeh Johnson and other immigration officials shouldn’t be held in contempt of court. Well judge, Attorney General Holder was held in contempt of Congress; big deal.

Then last November the U.S. Court of Appeals for the 5th Circuit upheld Hanen’s decision, ruling that the president had exceeded his authority, essentially rewriting the nation’s Immigration and Nationality Act. In fact, the plaintiffs noted: “The President candidly admitted that, in so doing, he unilaterally rewrote the law: ‘What you’re not paying attention to is, I just took an action to change the law.’” But two decisions against him only emboldened the president further and his “Justice Department” now plans to take the case to the Supreme Court.

This president also circumvents the Constitution in the arena of foreign affairs. By the slick ploy of calling the disastrous Iran nuclear treaty a “deal” not a treaty, the chief executive has dishonesty dodged the constitutional requirement that 2/3 of the Senate must consent to such agreements. Obama knew that would never happen; thus the “deal” lingo. This non-treaty treaty has several important provisions: it doesn’t legally restrain Iran because it hasn’t been signed by that nation’s president nor approved by its parliament; it rewards Iran with $150 billion to fund Iran’s terrorist campaigns against us and the rest of the world; and it forbids us to inspect Iran’s nuclear facilities. Iran celebrated by firing off a couple test missiles designed to carry nukes, festivities banned by the U.N. and the “Deal.”

Same ruse with the Paris “Climate Change” con. While the world is waking up to the bogus statistics that prove man-caused climate change an elaborate hoax, Mr. Obama swaggers out of a Paris confab with yet another deal, this one servicing his pet jihad against dirty, nasty, but essential to survival, fossil fuels. Still what a triumph: China, the polluter champ of the world, pledged to start reducing carbon emissions in 15 years! Though nobody really agreed to anything but unicorn-cupcake promises, Obama can be trusted to try using the “pact” to further decimate the coal industry and put tens of thousands of Americans out of work. That’ll show a Congress unwilling to pass his precious cap and trade regs who’s boss.

All of these unconstitutional maneuvers have obvious catastrophic effects on Americans. But the most profoundly malevolent, at least in clearly revealing Obama’s distaste for this nation, is his steady release from Gitmo of jihadis sworn to murder Americans. We know that about one-third of them go back to the battlefield as highly esteemed commanders. Yet our commander-in-chief persists in inflicting these killers on his own troops. Imagine George Washington capturing the British top generals decimating the rag-tag American troops in the Revolutionary War, and then releasing them knowing many would kill his own soldiers.  Imagination fails.

The signers of the Constitution gave us but one recourse for a rogue chief executive whose destructive actions imperil the American peoples’ liberty: impeachment. According to Article 2, section 4, “The president…shall be removed from office on impeachment for, and conviction of, treason, bribery, or other high crimes and misdemeanors.” In their fervent patriotic naiveté, the Founders provided us no other remedy. Of course the color of his skin has inoculated Barack Obama against any thought of impeachment. Meanwhile, he rends our beloved America sinew and bone and nothing seemingly can stop him.