Colorado Supermax Town to Obama: Keep Gitmo Terrorists Away From Our Children 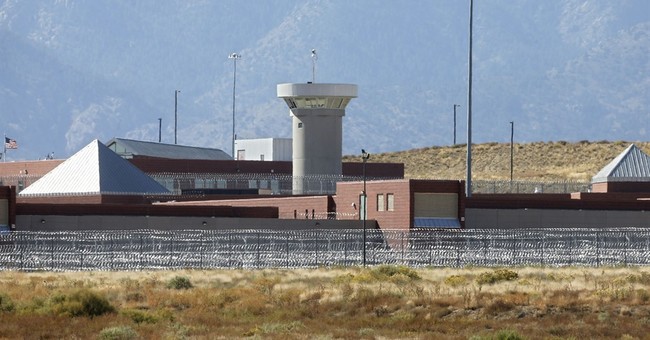 Islamic terrorists have no scruples about slaughtering schoolchildren and that’s what worries the residents of Florence, Colorado, when they hear the president talk about transferring up to 61 Gitmo prisoners to the Supermax prison in their small town. It should also concern the prison towns in Kansas and South Carolina that the administration is considering as terrorist depositories.

In recent years, Muslim radicals have taken two schools hostage, causing the deaths of 318 schoolchildren and the maiming of hundreds more during brutal sieges in Pakistan and Russia that horrified the world.

“Our schools represent soft targets in a hostage situation,” says a former teacher in a video produced by Denver “Americhicks” radio hosts Kim Monson and Molly Vogt. “These are not regular prisoners.” The co-hosts of the “Heart of the Matter” on KLZ 560 radio traveled to Florence to talk to about 150 citizens who voiced their passion about keeping their community safe.

Because the Florence facility is the highest-security prison in the federal system and can boast the precedent of already housing a distinguished cabal of convicted Islamic terrorists including Sept. 11 conspirator Zacarias Moussaoui, 1993 World Trade Center bomber Ramzi Yousef, and even the hapless shoe bomber Richard Reid, there’s a sense that Supermax is on the Obama Administration’s executive order short list.

Fueling such speculation, the president has even taken the trouble to point out that nobody has ever escaped from Supermax. But that’s not the point. Anyone who has ever seen a prison escape thriller knows that a few resourceful and determined pals on the outside are more helpful than a shovel or a barbed-wire cutter.

If suicide bombers are willing to blow themselves up just to take a few infidels with them, imagine the glory that could lure terrorist foot soldiers to rescue their jihadi generals, super-heroes who have spent time at Gitmo. Those foot soldiers are out there, and some of them are trained veterans of ISIS battlefields.

A recent House Homeland Security Committee report notes that about 250 Americans have tried to join or actually have joined ISIS forces fighting in the Middle East and that “several dozen” have re-entered the U.S. That they’re not even sure how many is especially disturbing.

The report goes on to warn that these fighters “armed with combat experience and extremist connections…pose a serious threat to the United States.” Adds the report. “Even if they do not return home to plot attacks, foreign fighters have taken the lead in recruiting a new generation of terrorists and are seeking to radicalize Westerners online to spread terror back home.”

It continues, “Research also finds attacks conducted by returnees are more deadly than those carried out by homegrown extremists. These worries have materialized in the United States this year, as several American returnees have been arrested and charged by authorities.”

The small town of Florence, named for a settler’s daughter in the 1880’s, occupies four square miles about 100 miles south of Denver. Its population of nearly 4,000 lacks the resources to deal with international terrorist attacks. It would take only a few determined terrorists to take over its schools and businesses.

Less than a year ago, a team of only nine heavily armed Pakistani Taliban terrorists savagely attacked a school for children of army soldiers in Peshawar, Pakistan. During the eight-hour rampage, the gunmen lined up the 1,100 students and shot many in the head, then hunted others as they hid under their desks. In the end they slaughtered 132 schoolchildren ages 5 to 17 and 13 teachers.

In 2004, a small band of commandoes led by Chechnyan Islamic separatists invaded a school in Beslan a town in the North Caucasus region of Russia. For three days, they held over 1000 people hostage, including 777 children. At least 385 hostages died, including 186 children. The exact number isn’t known since many were never found. Hundreds more were injured in life-altering ways, including losing limbs to bomb explosions.

These terrorists, as we have learned from their hideous beheading and torture videos, are not restrained by the ethical principles that govern most of us. Even career criminals have a moral code of sorts; they despise any among them who will harm a child and often mete out punishment to fellow prisoners convicted of crimes against children. Not the Islamic jihadis. We simply cannot tempt them to massacre Americans or American children on our own soil.

The 2015 National Defense Appropriation Act just passed by Congress forbids the president for the umpteenth time to transfer these 60 or so Guantanamo prisoners to the U.S. Known as the “worst of the worst” they are so dangerous that even this most persuasive of world leaders can’t talk any nations into taking them. So he wants to force them on us, his own people.

Meanwhile his spokes-shill Josh Earnest makes the outrageous argument that opposition to Obama issuing yet another unconstitutional executive order is “a pretty transparent case of the United States Congress putting narrow political interests ahead of national security.”

No, that motive belongs to this president whose obsessive-compulsive disorder to shut down Gitmo and gift the American base to Cuba has become ever more bizarre throughout the more than seven years of his tender care for our national security. Why he would consider essential to his legacy closing an effective and humane prison for the most vicious enemy combatants is itself a great mystery. But even this president hopefully will come to his senses and refuse to risk a massacre to achieve a supremely idiotic “legacy.”