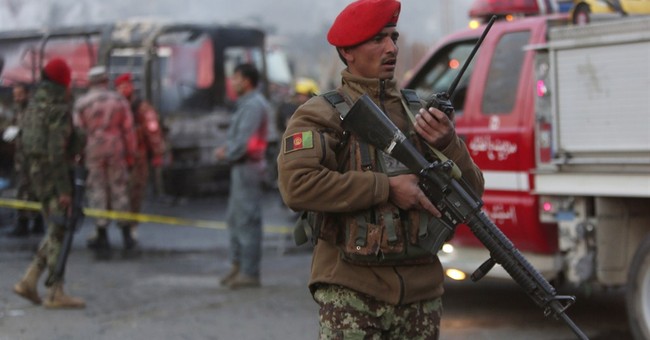 We were both waiting for our delayed planes in the boarding section of a large airport. I had noticed the young man wearing the sandy-colored desert-camo uniform and after I thanked him for his service, we just naturally started talking. Elated about going home for several months after a year in Afghanistan, he was open and even chatty in the aw-shucks way of a youth raised in a solid middle class family in the heartland. I didn’t tell him I am a raving, flaming, right-wing writer because I didn’t want his views to be colored by mine.

I asked Dane (not his real name of course) how it was going over there; if it was dangerous where he was. He laughed and said it was extremely dangerous largely because of Obama’s rules of engagement that wouldn’t let them fire on enemy fighters unless they were nearly 100 percent sure they were Taliban. “One hundred percent is just impossibility in a war,” he said. “We are being handicapped by our own commander-in-chief who is so terrified a civilian may be hit that all these precautions make it downright dangerous for us. And they’re really good at hiding weapons in their loose clothes.”

He told me that soldiers are also reluctant to fire because they may be hauled up in military court to be prosecuted and maybe do time for doing their jobs. Every time they think about pulling the trigger they hesitate to consider if they’ll be facing a court martial.

But his commanding officer “revised” the rules to protect his men. “He told us to hell with the rules, we should fire whenever we feel we’re in danger,” said Dane, smiling at the chutzpah required for common sense. “He said he’s not gonna be responsible for sending any of us home in a body bag.”

Another rule – that they could only enter the home of an Afghan if invited in – also frustrated their battle against the Taliban. “Before, we could get a good idea where they were, bust down the door and raid the place,” Dane said. “But now they hide in homes and buildings and they know we’re not allowed to go after them. It would be pretty unusual to get invited into a Taliban fighter’s home for tea.”

I asked if he thought the Afghan army that we are supposed to be training would ever be able to stand up on its own and fight for its country’s freedom.

Dane said there are many brave Afghan soldiers committed to battling for their nation. “But a big part of the problem is cultural and religious,” he said. “Do you know what inshallah means?” I answered that it had something to do with the will of Allah. “Exactly. Means ‘if Allah wills it.’ And it applies to everything in their lives, every single thing they do.”

An example? “In our marksmanship training we learn to concentrate, sight precisely on the target, and hold our breath to steady our aim as we squeeze the trigger,” explained the young soldier. “We practice and practice and learn just what we need to do for a successful shot. But for an Afghan soldier, inshallah means that he’ll only hit the target if Allah wants it to happen. So marksmanship doesn’t really matter. The bullet can come out and go all over the place“ – here he waved his index finger in a jaggedy trajectory through the air – “but if Allah wants it to happen, that bullet will somehow find its way into the heart of the enemy fighter.”

But what does that kind of determinism do to -- training?

That’s just it, he says. “The four months of basic training American troops go through before deploying is something we just can’t do with the Afghan soldiers over there. Their culture won’t allow it. In Basic, you’re worn down, humiliated, all your independent spirit and your pride, your individualism as a person – that’s all stripped out of you. Then when there’s nothing left of you, they build you up again. They give you your pride back, you get it all back. But you’re a whole different person now; you’re a warrior.”

Dane looked at me with shining eyes. “And we’ve been doing that for over two hundred years. That’s how we’ve built the strongest military, the best fighting force the world has ever seen. ”

So that’s what we need to do with the Afghans, he explained. Here’s how: “Bring some of their best over here and put them through basic training, American-style. The whole enchilada. Then send them back to their country and put them in charge as their military’s troop trainers.”

“Then we’ll see such instant progress – the world will be amazed. That’s how we win this thing,” he said, getting to his feet and shouldering his pack. His plane had been called. One last question: What does he think of President Obama? A twisted smile: “I’ll tell you this. All of us in the military can’t wait until we have another Commander in Chief.”