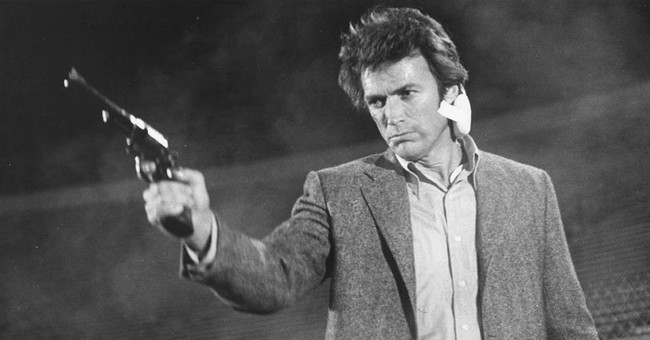 The left’s great hero is Caitlyn (formerly known as Bruce) Jenner, honored by ESPN for courage under breast augmentation surgery and most derivative Kardashian-esque wardrobe. The right’s great hero is Navy Seal sniper Chris Kyle, honored for courage under fire and saving countless American lives on a dusty godforsaken battlefield. If Caitlyn had gone under the gelding knife maybe she would have earned the Presidential Medal of Honor. But there’s time for that.

The left stayed away from “American Sniper” in droves, while everyday Americans made the story of Kyle’s life the highest-grossing film of 2014 and the most popular war movie ever. Predictably, Castro-bros-loving Marxist heffalump and carb-overload victim Michael Moore accused Kyle of cowardice, comparing him to the sneaky German sniper who shot his uncle in WW2. For a dedicated anti-American like Moore, it doesn’t matter if you’re using lethal force to protect your fellow American soldiers or to advance Nazi tyranny. The relentless moral equivalency of the left decrees that bullets are bad, unless it’s the Castro brothers or T-shirt hero and mega-killer Che with the rifles. That’s called liberation, even after they turn their weapons on their own people.

Lefties hate real heroes because it doesn’t take a village to make that decision to pull a trigger or rescue a fellow soldier. These are risky acts of the most personal bravery that earn purple hearts and white crosses. By their very nature they defy the ruling leftist creed that the collective is always more powerful and important than the individual. Heroic individualism is the enemy of groupthink, and groupthink is the guiding theology of leftism, socialism, Fascism, Marxism, every ism. The solitary individual—John Doe, Mad Max, The Gladiator, The Patriot, Dirty Harry, The Man With No Name –always takes his lonely stand against a corrupt sheriff or the evil mob, or a tyrannical government.

Today’s heroes can be a group of Catholic nuns who for over 100 years have served the poor and elderly, yet are hounded into court by the Obama “Justice” Department intent on forcing them to abandon their religious beliefs in favor of government edicts. Or a couple of cake bakers in Washington State persecuted by militant same-sex marriage activists into bankruptcy and 135,000 in fines.

Yet it seems that many a famous and dedicated liberal harbors a tortured secret desire to be a hero. Maybe it was too many John Wayne movies at an early age that drove both Hillary Clinton and NBC’s Brian Williams to claim they had ducked actual hails of bullets in dangerous foreign escapades.

Several times during her 2008 campaign for the presidency Clinton reminisced about a visit to Bosnia as first lady in 1996. “I remember landing under sniper fire. There was supposed to be some kind of a greeting ceremony at the airport, but instead we just ran with our heads down to get into the vehicles to get to our base." But turns out that memory was just her private Superwoman fantasy, busted by a CBS News video that showed a smiling Hillary being greeted on the tarmac by the usual sweet-faced children bearing bouquets, minus fusillade and/or pandemonium. Mrs. Clinton also cited the danger of that trip as giving her important foreign policy experience, experience she doubtless tapped when she got that 3 a.m. phone call from Benghazi.

Brian Williams wanna-be hero stories were serious enough that they cost him his nightly news anchor chair at NBC. For years he told fake war stories on nightly talk shows seen by millions and was lionized for his fictional bravery. Among them, that his helicopter was hit and forced down under fierce rocket-propelled grenade fire during the 2003 Iraq invasion. Turns out his Chinook was actually an hour behind the three that took fire. His various apologies blaming ego and the fog of being Brian only came after several crew members who were on the aircraft that was really hit came forward and revealed the truth.

He invented a similar fiction about being nearly hit by rockets while flying in a helicopter covering the 2006 Israel-Hezbollah War. Williams spun his thrilling tales to appreciative TV show hosts like David Letterman and Jon Stewart, seen and lionized by audiences of millions for his ersatz bravery. This is known in the military as “stolen valor.” Said Naval Academy graduate and veteran advocate Montel Williams (no relation) in a Fortune commentary, “Brian Williams played soldier in Iraq – he got to claim all the drama and excitement with little of the risk those who actually serve face daily.”

When called on her make-believe heroism, Hillary said she “misspoke” – lib-speak for lying. Brian Williams got closer to the truth with his unapology apology, admitting that "Looking back, it had to have been ego that made me think I had to be sharper, funnier, quicker than anybody else. Put myself closer to the action, having been at the action in the beginning." In other words, he wanted to be a hero.

Then there’s John Kerry, the secretary of state who just finalized the “deal” with terrorism sponsor Iran that virtually assures they will have nuclear weapons and the missiles to explode them over America in 10 years or less. Kerry has a very complicated relationship with heroism. He was a decorated Vietnam war hero before he was an anti-hero who threw his medals over the White House fence in a war protest.

But then he reclaimed hero status as the 2004 Democratic presidential nominee, striding onstage and saluting the convention delegates, announcing, “I’m John Kerry and I’m reporting for duty!”

The Vietnamese Communist government has shown their appreciation for Kerry’s heroism by hanging his picture in the part of the Communists War Remnants Museum in Ho Chi Minh City (now Saigon) which is dedicated to the anti-war activists who helped the Vietnamese Communists win that war. Doubtless the North Vietnamese were grateful for Kerry’s 1971 testimony before the Senate Committee on Foreign Relations in which he accused U.S. troops of boasting they had horribly tortured civilians and razed villages “in a fashion reminiscent of Genghis Khan.”

Outraged push-back by his fellow vets disputing his stories and the legitimacy of his medals were responsible in large part for the defeat of Kerry’s 2004 presidential bid.

Webster’s defines a hero as someone “of distinguished courage or ability, admired for his brave deeds and noble qualities.” Caitlyn/Bruce Jenner or Chris Kyle? It’s really a matter of balls.