Jonathan Feldstein
|
Posted: Apr 05, 2018 1:00 PM
Share   Tweet
The opinions expressed by columnists are their own and do not necessarily represent the views of Townhall.com. 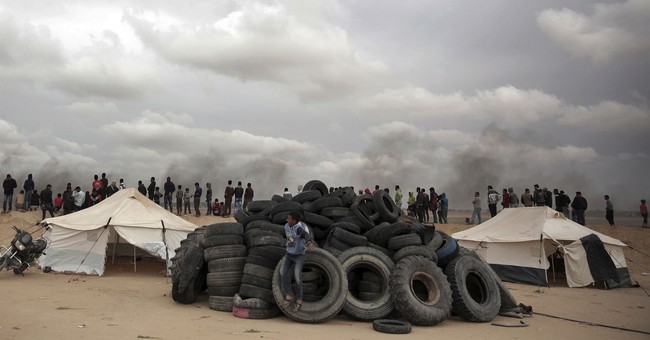 Reading about current events and a threatened Gaza demonstration incited by Hamas, I’m reminded of the well known story recounting the wisdom of King Solomon (1 Kings 3:16-28) judging to whom a baby belonged that two women each claimed as theirs. The women came to Solomon to adjudicate their dispute. One of the woman’s babies had died, and each claimed the surviving baby as hers.

25 “Cut the baby in half! That way each of you can have part of him.” 26 “Please don’t kill my son,” the baby’s mother screamed. “Your Majesty, I love him very much, but give him to her. Just don’t kill him.” The other woman shouted, “Go ahead and cut him in half. Then neither of us will have the baby.” 27 Solomon said, “Don’t kill the baby.” Then he pointed to the first woman, “She is his real mother. Give the baby to her.”

Solomon declared the first woman the true mother, as a mother would even give up her baby if that was necessary to save its life.  Indeed, anyone who would agree to sacrifice her precious child was not only not the mother, but had no right to the baby.

Today, a similar cynical story is unfolding before our eyes. Under Hamas’ terrorist rule, tens of thousands of Gazans are preparing a second week of protests at the Israeli border, this week planning to burn thousands of tires.

The cloud (of smoke) has lifted on any semblance of last week’s farce that the protests are meant to be peaceful.  Palestinian terror groups of all stripes are calling upon Gazans to collect and burn 10,000 tires. Their “day of the tire” is going viral.

Burning thousands of tires will create a smokescreen, shielding protesters, including terrorists, from the view of IDF. Palestinian Arab social media posts instruct Gazans wear clothes that won’t stand out, and keep their faces covered, for fear of Israeli drones taking pictures.

Writing to Director-General Tedros Adhanom of the World Health Organization, Maj. Gen. Yoav Mordechai, Israel’s Coordinator of Government Activities in the Territories, called upon the WHO to prevent an “ecological catastrophe.”

"The Hamas terrorist organization, which controls the Gaza Strip, has issued an order to burn about 10,000 tires this Friday along the border with Israel," he wrote. "The burning of tires in such a huge quantity will cause severe damage to the ecosystem in the area, will severely harm the life, flora, and health of the residents, and will (create) severe damage to the aquifer and lead to unprecedented air pollution.”

“This is a serious environmental issue that will harm the health of the residents... I call upon you, as the head of an organization whose goal is to promote health and protect natural and environmental resources, to do everything in your power to publicly warn against this ecological catastrophe and to protest Hamas’ irresponsible behavior.”

Environmentalists should be up in arms about this premeditated ecological disaster.

Human rights organizations should be lining up to protest how the smoke and toxins will harm the people, and how Hamas is putting tens of thousands in harm's way.

The cynicism continues with protestors being told only to bring Palestinian flags to create another smoke screen; that of the impression that this is a popular demonstration, not inspired or instigated by Hamas, and not to display the “true colors” of the various Palestinian Arab terror group with which they are affiliated.

Prime Minister Netanyahu’s spokesperson Ofir Gendelman noted that “Hamas will try to torch (Israel’s) border fence Israel with thousands of tires. This will burn down Palestinian fields and the heavy smoke, toxins and pollution will cause a huge environmental disaster for Palestinians. But Hamas doesn’t care. Remember that.” He added the terror group would lie claiming that Israel “used ‘a new poisonous gas’ against Palestinians, when in fact it was the one has INTENTIONALLY caused a cloud of TOXINS that will engulf Gaza.”

If the protests were truly peaceful, there’d be no reason to have any kind of smoke cover.  Hamas’ cynical environmental crime is transparent, to obscure the vision of IDF soldiers, and to obscure the identity of the terrorists who are instigating and, literally, igniting the masses.

Indeed, last week’s alleged peaceful protest was anything but. Some 30,000 rioted along the Gaza border, orchestrated by Hamas. There were discrepancies in reports on the death toll: Hamas claimed 18. The Palestinian Authority claimed 16. Indeed, underscoring the terrorist instigation of violence and why Hamas wants to create a smoke screen for new protests, Israel named 10 of the dead as members of terror groups including Hamas, five of whom Hamas credited as its members, with Islamic Jihad later claiming another.

It's hard to imagine how, if Hamas and other Palestinian Arab terror groups truly claim to advocate for their people, that they so wantonly and irresponsibly put them in harm’s way, both by encouraging violent protests as well as exposing them to the harmful smoke from thousands of tires.

It’s hard to imagine the Palestinian Arab narrative claiming the land as being theirs yet they are willing to burn it, destroy it, and ruin people’s livelihoods.

It's certainly not hard to imagine the application of Solomon’s wisdom, that if such people are prepared to sacrifice something so precious that neither can have it, they don't have a true claim.  Yes, they live among Israelis on a small piece of real estate that’s under dispute, but big enough to share.

But the answer is not burning and destroying, but growing and building. Until, and if, Israel’s Palestinian Arab neighbors ever comprehend and embrace that, at best all they can hope for is half of a dead baby.