Jonathan Feldstein
|
Posted: Apr 11, 2016 12:01 AM
Share   Tweet
The opinions expressed by columnists are their own and do not necessarily represent the views of Townhall.com. 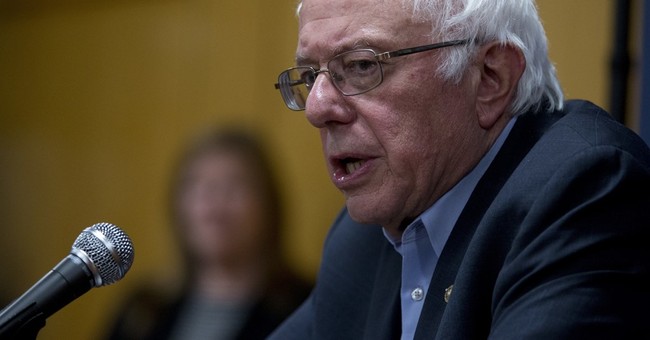 You've heard of the water pollution crisis in Flint, Michigan infecting residents and seeping into US politics, but the toxicity emanating from Vermont and trickling down throughout American politics is less known but no less serious.

Last month, Vermont Sen. Patrick Leahy and 10 House members asked Secretary of State Kerry to investigate alleged Israeli human rights abuses and to determine whether they are reason enough to cut military aid. Leahy asked to look into “gross violations of human rights” by Israel (and Egypt), citing examples of alleged extrajudicial killings by both countries.  The anti-Israel source of these allegations should be enough to raise eyebrows and challenge its legitimacy.  Giving it credence indicates a gross lack of awareness of the reality, or caring, about Israel’s challenges in fighting terrorism.  But to link Israel and Egypt, albeit fighting the same war on Islamic terrorists, is the icing on the cake. The toxic venom Leahy infected into Washington was serious, but it may come from a toxic environment in his home state.

Following Leahy, Vermont Senator and presidential candidate Bernie Sanders entered the race to show his lack of understanding or caring with his own shocking comments on Israel. It's a shame that a man who partly credits his socialist worldview on living in an Israeli kibbutz as a young man only picked up a defunct economic policy here, and yet apparently no realistic perspective of how Israelis are forced to live and defend themselves.

Last month in a speech he prepared for AIPAC, Sanders demanded that Israel remove its blockade from Gaza while claiming in parallel to support Israel’s “right to live in peace and security.”  This shows an absurd lack of perspective, because it's through measures such as the blockade of weapons and other items used to attack Israel into Gaza that Israel is able to maintain its security.  Weakening these measures would result in a corresponding decrease in Israel's security. It's a formula much simpler than his economic policies, and one that's actually with a proven record unlike a Soviet style "five year plan" he'd be apt to introduce.

The equation by which allowing Hamas to freely smuggle in rockets, missiles and all military equipment somehow ensures Israel's safety is as unsound as a socialist economic policy for the world’s greatest democracy. Only a fool who has no understanding of Israel and its security threats, or one who does not care about Israel’s security needs, could possibly make much less endorse such a position.

Then, in a recent New York Daily News interview Sanders blamed Israel for an “indiscriminate” war on Gaza in 2014. Though admitting that he didn’t really know the facts and backtracking some from that position since, Sanders stated and repeated a slanderous lie, that Israel killed over 10,000 civilians that summer.

“I don’t remember the figures, but my recollection is over 10,000 innocent people were killed in Gaza. Does that sound right?”

After being challenged on this, Sanders, doubled down, literally.  “I don’t have it in my number…but I think it’s over 10,000,” he reiterated. “My understanding is that a whole lot of apartment houses were leveled. Hospitals, I think, were bombed. So yeah, I do believe and I don’t think I’m alone in believing that Israel’s force was more indiscriminate than it should have been.”

For sure, a lot of homes and other civilian targets were bombed. But this is because Hamas was using civilian facilities to shield its terrorist and weapons infrastructure.  The truism that was made clear then remains true today; Israel uses its weapons to protect its people and Hamas uses its people to protect its weapons.

As David Horovitz of the Times of Israel notes, "That’s seven times the self-serving figure asserted by Hamas, the terror group that runs Gaza, and gleefully adopted by the UN Human Rights Council, the sham body that obsessively loathes Israel. According to Hamas, 1,462 civilians were killed. Israeli authorities believe the true figure was far lower, both because Hamas inflated the overall numbers of combatants and noncombatants killed, and because Hamas deliberately misrepresents many of its own dead gunmen, who often fought out of uniform, as civilians — to demonize Israel, and to minimize its own losses. Israel also stresses that Hamas deliberately placed Gazans in harm’s way by putting its rocket launchers and terror tunnel openings in and around their homes. Finally, Israeli officials note that no civilians whatsoever would have been killed had Hamas not chosen to maintain its violent hostility to Israel, which since 2005 has had no civilian presence and no military presence whatsoever in the Gaza Strip. In Gaza, Israel did what much of the world — including Bernie Sanders — would have it do in the West Bank: It left. And war followed."

Christian friends visited me in Israel recently and were surprised that I wasn’t supporting Sanders because he is also Jewish.  Yes, Jews do and need to stick together, but when someone’s toxic views are so wrong and harmful, the fact that he was born Jewish and identifies as such to some degree, is of little interest.  In fact, looking at the season we are in, there’s an appropriate biblical analogy.

Passover is the celebration of our liberation from Egypt. Based on Sanders’ comments I'm just waiting for him in his warped world view overlaid with a socialist economic policy to jump on the bandwagon of those who claim that Israel owes Egypt reparations from when we left slavery there.

In addition, as our rabbis teach, while some two million Jews fled Egypt into freedom, there were Jews who were so assimilated that many more were left behind either because they were so detached from the Jewish people or did not deserve to be freed. We celebrate the Passover Seder by imagining that we were liberated ourselves. The corollary to this is that we can imagine that if Bernie Sanders were a slave in Egypt, he’d have been left behind.