Stab Me Once, Shame on You

Jonathan Feldstein
|
Posted: Jan 19, 2016 9:18 AM
Share   Tweet
The opinions expressed by columnists are their own and do not necessarily represent the views of Townhall.com. 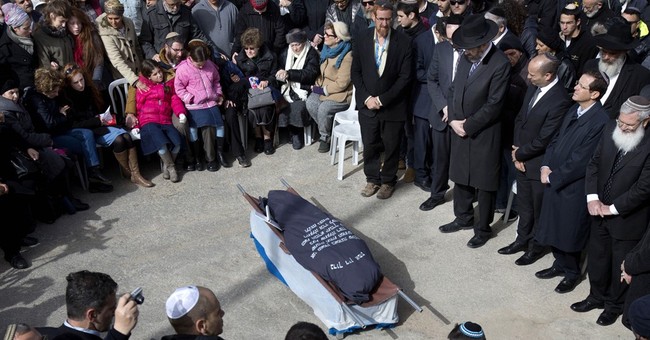 This week Jews worldwide were treated to two stabbings, one murdering a Jewish mother of six bereaved children. The consequence of the second is the imminence of more to come. The immediate threat is to Jews, but there are many reasons why everyone should care.

In Israel, Dafna Meir, a Jewish mother of six, was stabbed to death fighting off an Arab terrorist who broke into her home. Her children were home as she struggled with the terrorist to protect them. Her actions were selfless, heroic, and her death equally sad and grotesque.

Israelis have been subject to a plague of terrorism leaving dozens murdered and hundreds injured, and hundreds more bereaved and traumatized. Each death is a personal and national tragedy. Yet this was especially despicable because it was up close and personal, the terrorist singling out his victim, not "just" shooting anonymously into a crowded cafe, traffic jam of commuters sitting idle, or ramming his car into dozens of people waiting for a bus.

Making this murder all the more horrific is that the terrorist broke into Dafna's home, and murdered her in cold blood, before her children. That she fought to protect them exalts her humanity, compared to the inhumanity of a terrorist murdering a woman in front of her children.

Before the day was out, news reports dismissed, and even justified her murder because Dafna was a "settler" living in a Jewish community, in part of the Land of Israel, that was established after 1967. Dehumanizing the victim by writing her off as a "settler" is not new, but just as Dafna’s murder was especially grotesque and inhuman, so too is any excuse justifying this because of where she lived.

Dafna Meir was murdered by an Arab terrorist because she was a Jewish woman living in Israel. Any other rationalization is as disgusting as her murder itself.

Stab me once shame on you.

This week world Jewry was treated to another figurative stabbing, in the back, which will lead to more Dafnas, not only in Israel. In its prisoner swap with Iran before releasing hundreds of billions of dollars to the rouge murderous Islamic regime, as if to pretend that the world order is perfect, the U.S. did something horrific, and that makes it compliant.

Four Americans were released from years of imprisonment in Iran, something wonderful for which all should be elated. However one American was left behind. By coincidence he is Robert Levinson, an American Jew. There's simply no possibility that he's just missing and the Iranians don't know where he is. Of course they do. And it's no coincidence that the one left behind was a Jew.

One doesn't expect better from Iran, but one ought to be able to expect better from the U.S. Levinson is the latest sacrificial lamb and that's bad enough. His abandonment by the US is a betrayal of all Jews, and American values.

The message through this betrayal is that Jewish lives don't matter. It gives Iran and its global terrorist network not just a free pass to kill more Jews, but in fact the incentive to do so. The message is clear. If you happen to kidnap Americans whether reporting or preaching in Iran, or sailors right off their boats, we will expect them back and thank the hostage takers for returning their victims.

But hold a Jew hostage? That's ok. Send snipers to the Israeli border to kill Jews in Israel? No worries. Fire rockets at Israeli cities? Not a problem. Blow up a community center, synagogue or kosher market? All in a terrorist’s day's work.

That the Iranians just got billions of dollars as a cash bonus will grease the wheels and provide greater resources, ability and incentive to do so.

Stab me twice shame on me.

But I'm not prepared to be a victim, or let others become victims either. And I'm certainly not prepared to be written off as just a "settler" and therefore a "legitimate" target. Today, all Jews are less safe, not because of where Dafna Meir lived and was murdered, or because of where I live, but because Iran and its global terrorist network not only got a free pass, but the funding to do whatever they want.

Other than writing this and hoping it will be shared widely, I'm not sure what I or any other individual can do to turn the tide. Please share, but also share your thoughts.

One thing I do know is that Jews and Christians and all people of good will need to stand together and raise a public outcry. It's no coincidence that as the festival Purim approaches, celebrating the Jews overcoming a similar global Persian threat as chronicled in the Book of Esther, there are parallels we need to learn from, and actions we must undertake.

We need to have an outcry of prayer that's loud, sincere, and ongoing, beseeching God not to allow any more victims of the Iranians or their proxies.

And if it takes a squadron of Israeli planes to take out the ultimate threat, let’s pray that they go and return in safety, and carry out their mission with complete effectiveness.

There are abundant parallels with the rise of the Nazis in Europe. Pastor Martin Niemöller wrote about the cowardice of Germans to speak out following the Nazis' rise to power.

First they came for the Socialists, I did not speak out— Because I was not a Socialist.

Then they came for the Jews, I did not speak out— Because I was not a Jew.

Then they came for me—and there was no one left to speak for me.

If it’s not good enough to raise an outcry over this murder and betrayal just because the victims are Jews, what will you say or do to be sure that you are not next?