Paul Ryan Is Once Again Being Cast as a Pariah

Jonah Goldberg
|
Posted: Jul 17, 2019 12:00 AM
Share   Tweet
The opinions expressed by columnists are their own and do not necessarily represent the views of Townhall.com. 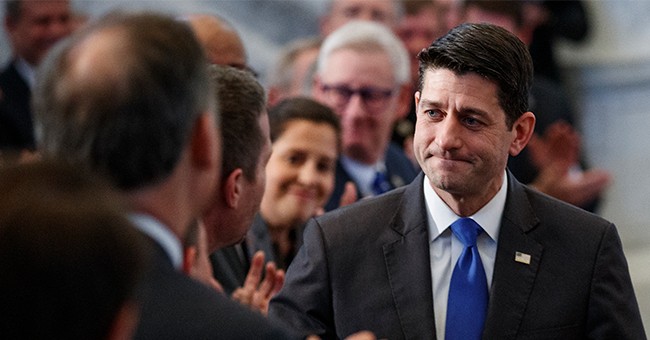 Paul Ryan is getting the hate treatment — again.

The former GOP House speaker and 2012 vice-presidential candidate is a unifying figure these days. Liberals have long despised him — unfairly in my mind. Anti-Trump conservatives are infuriated by his "surrender to Trumpism," in the words of Charlie Sykes, editor-in-chief of the Bulwark.

And, of course, the Trumpian true believers have long despised Ryan.

The latest round of vitriol makes sense, of course. The Ryan haters are just following President Trump's lead.

Excerpts from Tim Alberta's riveting new book, "American Carnage: On the Front Lines of the Republican Civil War and the Rise of President Trump," came to Trump's attention at the end of last week, and he was angry. The book's quotes from Ryan are relatively tame — and tellingly, few are bothering to debate their substance. He accuses Trump of "knee-jerk reactions" and says he "wanted to scold him all the time."

But Trump did not take the criticism lightly. In a barrage of tweets and on-camera comments, he railed against the former speaker.

"Paul Ryan almost killed the Republican Party. Weak, ineffective & stupid are not exactly the qualities that Republicans, or the CITIZENS of our Country, were looking for," Trump wrote in one tweet.

On the merits, this is more than a little debatable. As a GOP leader and as the speaker, Ryan helped build the largest House GOP majority since 1929. When House Speaker John Boehner (R-Ohio) announced his retirement, Ryan was the one Republican the caucus could unite around to replace him. Trump, not Ryan, cost the GOP seats in 2018. (You can look it up.)

It's also hard to square Trump's weekend venom with his congratulatory tweet on April 2018 on the news that Ryan was retiring: "Speaker Paul Ryan is a truly good man, and while he will not be seeking re-election, he will leave a legacy of achievement that nobody can question. We are with you Paul!"

But there was also history between the two men dating to 2016, when Ryan was slow to embrace Trump. Ryan's reluctance was widely shared, of course, by virtually the entirety of the GOP leadership, particularly in the wake of the "Access Hollywood" tape. Former Trump chief of staff Reince Priebus; Office of Management and Budget Director Mick Mulvaney; U.N. Ambassador Nikki Haley (for whom my wife works); Sens. Ted Cruz, Lindsey Graham, and Mitch McConnell; and even Vice President Mike Pence took their sweet time hopping aboard the Trump train.

Defenders of these and countless other Republicans say, in effect, "Yeah, but they got with the program." Yeah, and so did Ryan, by his own admission. He tells Alberta he felt obliged to help steer the Trump presidency toward productive ends because Trump didn't "know anything about government." And by Trump's own standards, Ryan had enormous success in advancing the president's agenda in Congress. The House passed an Obamacare repeal, sweeping tax cuts and a host of regulatory reforms.

Trump blames Ryan for not funding the border wall, but this is nothing more than scapegoating his own failures — even though the president routinely insists the wall is actually being built. Moreover, Trump forgets that Ryan concocted a border adjustment tax that would have not only satisfied Trump's tariff cravings in a less disruptive fashion but also provided ample funding for the wall. Trump didn't like it because it was too complicated, preferring his own approach to trade, which sees disruption as a feature, not a bug.

Ryan's real sin, it seems, was that he wasn't good enough at hiding his decency and integrity. This highlights the strange confluence between the "Always Trump" and "Never Trump" critiques of Ryan. Like the biblical Laodiceans, he was neither cold nor hot. Ryan signaled to Trump's critics that he understood exactly what he was compromising with, and he reminded Trump's apologists about what they were willingly overlooking.

As Ryan has told me and others, he felt an abiding loyalty to GOP House members to help them navigate the roiling waters of Trump's presidency. Ryan's problem was that "the [expletive] Boy Scout," as Trump called him, couldn't pretend he was excited about the mission.

This is the crux of the transformation of the GOP. In private, Republican officeholders sound a lot like Ryan. But in public, they're better at faking their enthusiasm, because that is what Trump demands.

Some sophisticated Trump supporters talk a lot about the need for transactional thinking where Trump is concerned. He's getting things done, don't you know? But helping him get things done isn't what the president demands of his allies. They must also celebrate how he does it. And for an "[expletive] Boy Scout," that was too tall an order.