Jonah Goldberg
|
Posted: Aug 08, 2018 12:01 AM
Share   Tweet
The opinions expressed by columnists are their own and do not necessarily represent the views of Townhall.com. 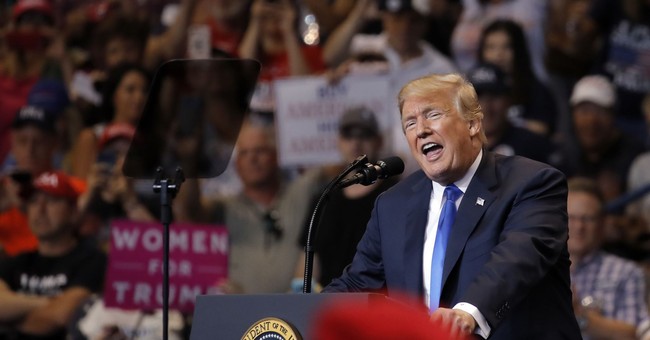 President Trump's demonization of the media as the "enemy of the people" is mostly kayfabe.

A professional wrestling term, "kayfabe" means presenting staged events as if they're real. Pro wrestling is theater, not sport. But it thrives on the illusion that it is the latter, not the former.

This twilight realm is Trump's bailiwick. His business empire was built on the maxim "fake it till you make it," feeding bogus stories to copy-hungry tabloids. His gift partly stems from believing his own bull. When asked under oath how he measures his net worth, he explained that it depends on his personal feelings.

Trump also believes in the kayfabes of others. He reportedly once called the headquarters of the WWE to find out if CEO Vince McMahon was OK after seeing McMahon's limo explode in an episode of "Monday Night RAW."

Trump is a bit like one of the shackled mortals in Plato's cave: He thinks the shadows on the wall, or his TV, are the real thing. Before it became politically inconvenient, Trump used to brag that he knew Russian President Vladimir Putin. "I got to know him very well because we were both on '60 Minutes,' we were stablemates," Trump said. He seemed to think they knew each other "very well" solely because they appeared on the same broadcast. Here's the thing: They had never actually met.

This twofold tendency -- to believe the story and to believe that the story is more important than reality -- goes a long way toward explaining why Trump believes in conspiracy theories, thinks lavish summits are their own reward, and makes bold announcements via Twitter that would be great if they were actually true.

"There is no longer a Nuclear Threat from North Korea," the president tweeted after his summit with Kim Jong Un. Ridiculous, but beside the point; if you want the legend to become fact, tweet the legend.

Our dilemma: how to deal with our kayfabed world. Some boosters just go along with the act. They say he's the "world's greatest negotiator" because that's the story of Trump's brand -- and id.

"Fake news" isn't necessarily news that's untrue, but news that inconveniently breaks the fourth wall of the kayfabe. When the Sun reported Trump's criticisms of British Prime Minister Theresa May, he said it was fake, even though he was on tape saying it. At a rally last month, Trump cut to the chase: "What you're seeing and what you're reading is not what's happening."

For many in the administration, the challenge is to humor the kayfabe while doing your job. In June, following the G7 summit in Canada, Trump tweeted that he had instructed his staff to reject the group's joint statement. His staff ignored him. "It's like there's a reality TV president, in his own bubble, thinking he controls stuff. It's like 'The Truman Show,'" one source told Buzzfeed. Secretary of State Mike Pompeo has suggested multiple times that administration policy cannot be gleaned from the tweets and riffs provided by the script-writing homunculus in Trump's brain.

Meanwhile, Trump's biggest detractors retreat to a kayfabe all their own, in which they constitute the heroic opposition to an authoritarian monster -- "literally Hitler!" If Trump were Hitler, they'd be in jail.

Journalists are caught between these narratives and often succumb to their audiences' delusions. Many of my colleagues at Fox tell viewers what they want to hear: Trump can do no wrong. Many at MSNBC and CNN are invested in either the "resistance" story or their victimhood. (CNN's Jim Acosta has made a name for himself as a preening handwringer over Trump's war on the press.)

In each case they're doing Trump a favor. Every wrestling storyline needs a villain and a hero, and every promoter/producer sees good ratings as their own reward. That's why the news media gave candidate Trump $2 billion in free media.

It's an ugly spectacle with an obvious solution: See the kayfabe for what it is; don't fall for the performance.