Jonah Goldberg
|
Posted: Aug 18, 2017 12:01 AM
Share   Tweet
The opinions expressed by columnists are their own and do not necessarily represent the views of Townhall.com. 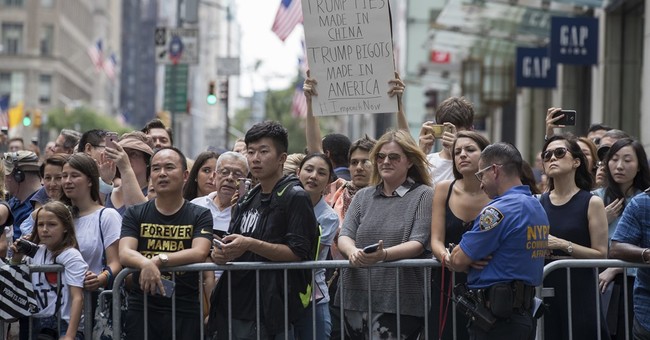 Fighting Nazis is a good thing, but fighting Nazis doesn't necessarily make you or your cause good. By my lights this is simply an obvious fact.

The greatest Nazi-killer of the 20th century was Josef Stalin. He also killed millions of his own people and terrorized, oppressed, enslaved or brutalized tens of millions more. The fact that he killed Nazis during WWII (out of self-preservation, not principle) doesn't dilute his evil one bit.

Alas, it doesn't settle the issue. Confusion on this point poisoned politics in America and abroad for generations.

Part of the problem is psychological. There's a natural tendency to think that when people, or movements, hate each other, it must be because they're opposites. This assumption overlooks the fact that many -- indeed, most -- of the great conflicts and hatreds in human history are derived from what Sigmund Freud called the "narcissism of minor differences."

Most tribal hatreds are between very similar groups. The European wars of religion were between peoples who often shared the same language and culture but differed on the correct way to practice the Christian faith. The Sunni-Shia split in the Muslim world is the source of great animosity between very similar peoples.

The young communists and fascists fighting for power in the streets of 1920s Germany had far more in common with each other than they had with decent liberals or conservatives, as we understand those terms today. That's always true of violent radicals and would-be totalitarians.

The second part of the problem wasn't innocent confusion, but sinister propaganda. As Hitler solidified power and effectively outlawed the Communist Party of Germany, The Communist International (Comintern) abandoned its position that socialist and progressive groups that were disloyal to Moscow were "fascist" and instead encouraged communists everywhere to build "popular fronts" against the common enemy of Nazism.

These alliances of convenience with social democrats and other progressives were a great propaganda victory for communists around the world because they bolstered the myth that communists were just members of the left coalition in the fight against Hitler, bigotry, fascism, etc.

This obscured the fact that whenever the communists had a chance to seize power, they did so. And often, the first people they killed, jailed or exiled were their former allies. That's what happened in Eastern Europe, Cuba and other places where communists succeeded in taking over the government.

If you haven't figured it out yet, this seemingly ancient history is relevant today because of the depressingly idiotic argument about whether it's OK to equate "antifa" -- anti-fascist left-wing radicals -- with the neo-Nazi and white supremacist rabble that recently descended on Charlottesville, Virginia. The president wants to claim that there were "very fine people" on both sides of the protest and that the anti-fascist radicals are equally blameworthy. He borrowed from Fox News Channel's Sean Hannity the bogus term "alt-left" to describe the antifa radicals.

The term is bogus for the simple reason that, unlike the alt-right, nobody calls themselves "the alt-left." And that's too bad. One of the only nice things about the alt-right is that its leaders are honest about the fact that they want nothing to do with traditional American conservatism. Like the original Nazis, they seek to replace the traditional right with their racial hogwash.

The antifa crowd has a very similar agenda with regard to traditional American liberalism. These goons and thugs oppose free speech, celebrate violence, despise dissent and have little use for anything else in the American political tradition. But many liberals, particularly in the media, are victims of the same kind of confusion that vexed so much of American liberalism in the 20th century. Because antifa suddenly has the (alt-)right enemies, they must be the good guys. They're not.

And that's why this debate is so toxically stupid. Fine, antifa isn't as bad as the KKK. Who cares? Since when is being less bad than the Klan a major moral accomplishment?

In these tribal times, the impulse to support anyone who shares your enemies is powerful. But it is a morally stunted reflex. This is America. You're free to denounce totalitarians wherever you find them -- even if they might hate the right people.