Comey Testimony Confirms Trump is Still His Own Worst Enemy

Jonah Goldberg
|
Posted: Jun 09, 2017 12:01 AM
Share   Tweet
The opinions expressed by columnists are their own and do not necessarily represent the views of Townhall.com. 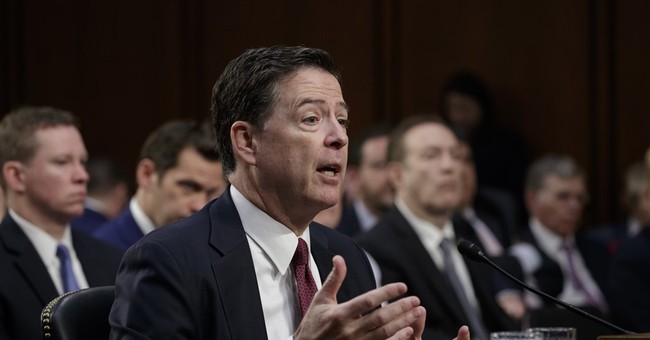 For those who hoped that former FBI Director James Comey was going to provide some bombshell evidence -- or any evidence at all -- that Donald Trump colluded with the Russians to steal the 2016 election, Thursday's Senate testimony had to be a major letdown. Of course, that was a foolish hope in the first place, since even if such evidence existed, Comey was never going to divulge it in an open Senate hearing.

For Trump's most ardent supporters, Comey's testimony exonerated the president. Trump's lawyer, Marc Kasowitz, responded to Comey's written testimony: "The president feels completely and totally vindicated." And in a sense he should.

Comey confirmed what Trump had said when he fired the FBI director last month: Comey had told the president on three different occasions that he wasn't the target of a criminal investigation. What drove Trump nuts was that Comey wouldn't say that publicly. Now he has.

But there's a problem. After the hearing, Kasowitz denied all the damning parts of Comey's testimony. The president never told Comey "I need loyalty, I expect loyalty," Kasowitz insisted, and Trump never asked Comey to drop any investigation into Flynn. In short: Comey's a liar and Trump isn't.

Given the pains to which Comey went to write down his version of the meeting with Trump, not to mention Comey's immediate conversations with colleagues and the utter plausibility of his account, Trump's denials seem thoroughly unconvincing to me. But more to the point, if Comey were inclined to lie, he would have -- and certainly could have -- invented a far, far more damning story. If your defense is that Comey is a liar, you can't cherry-pick the helpful bits and shout, "Vindication!"

Ultimately, the most obvious lesson of this unprecedented political fiasco should be the same for both Democrats and Republicans. Many Democrats want to believe in a stolen-election theory that would reveal Trump as an evil genius. The president's most vocal supporters, starting with the president himself, still insist that he's not evil, but that he is a genius. Indeed, the president says so himself.

"I know what I'm doing. I'm a smart person. The highest level of smart," he told People magazine. "People are saying Donald Trump is a genius," he told The New York Times.

When asked by MSNBC's Mika Brzezinski in 2016 which experts he speaks with, Trump replied, "I'm speaking with myself, number one, because I have a very good brain ... My primary consultant is myself, and I have, you know, I have a good instinct for this stuff."

Who knows what his IQ is, and to be sure that technique worked for him as a candidate. But when it comes to how the presidency works, Trump is an amateur, a bumbler and, very often, his own worst enemy.

Thursday's hearing was just the latest proof of that. If Trump hadn't fired Comey, or possibly if he'd just fired him in a sensible and professional manner, Comey might not have testified at all. There almost certainly wouldn't be a special counsel in the form of another former FBI director, Robert Mueller. If Trump hadn't violated all good sense and asked for a private session with Comey to ask (allegedly) for loyalty and for him to drop the Flynn investigation, Comey would have had little to testify about, given that he can't talk about the Russia investigation.

According to Comey, Trump believed the Russia investigation was a "cloud" over his presidency, preventing him from making great "deals" for America. Democrats and the media, desperate to explain away Hillary Clinton's humiliating defeat, surely deserve their fair share of blame for that cloud. But no sensible person can deny that Trump -- with his obsessive tweeting and aphasic outbursts -- has done almost everything he can to make that cloud thicker and darker than necessary. It's like he had a fog machine installed next to his giant TV.

If Trump had simply focused on making great deals for America -- whatever that means -- rather than obsessing over the Democrat-fueled myth that he was being investigated, he wouldn't have an approval rating in the mid-30s, and the Democrats would be on their heels. But he opted to rely on his instincts. And now the harshest irony is that, as Comey intimated Thursday, it may no longer be a myth that Trump is being personally investigated. Mueller is now looking at whether the president obstructed justice. I'm inclined to think he didn't. But Mueller wouldn't be looking at all were it not for Trump's super instincts.