Jonah Goldberg
|
Posted: Feb 09, 2017 12:01 AM
Share   Tweet
The opinions expressed by columnists are their own and do not necessarily represent the views of Townhall.com. 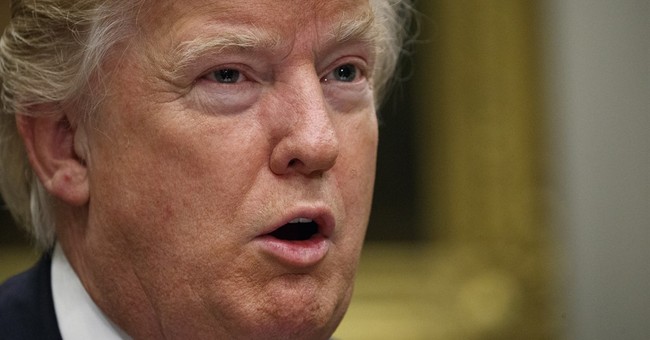 By now you may have noticed the difficulty many conservatives have defending everything President Trump does and says. I'm not just referring to the big policy moves, most of which conservatives can support fairly easily (so far). I mean the whole whiplash-inducing spectacle: the unfiltered, impulsive tweeting, bizarre interview non sequiturs, glib insults and distractions.

If you honestly have no idea what I'm talking about, you may need to be de-programmed from a personality cult. But for example: over the weekend, Donald Trump questioned the legitimacy of what he described as a "so-called judge" and suggested -- again -- that America has no right to judge Vladimir Putin's Russia given all the killing America has done. Other examples might include recent controversies over everything from inaugural crowd sizes to Arnold Schwarzenegger's ratings on "The Apprentice."

It's been interesting to see how various Republican leaders respond to Trump Unfiltered. Sometimes they'll simply say they're not going to respond to every distraction emanating from the president's mouth or Twitter feed. Others fall back on saying the president is "unconventional" in the way he communicates, so get over it.

This is a particularly popular talking point among his talk radio and cable TV boosters. It's almost as popular as attacking the mainstream media's very real double standard toward Trump and Obama.

Vice President Mike Pence has taken the "unconventional" defense to an art form. When asked about the "so-called" judge controversy by NBC's Chuck Todd, Pence replied, "I think people find it very refreshing that they not only understand this president's mind but they understand how he feels about things. He expresses himself in a unique way." Political consultant Alex Castellanos, a Trump enthusiast, went so far as to suggest that, "Donald Trump's unpredictability is a form of deterrence. It keeps bad people a step back."

Recently a new defense has sprouted up: Trump promised to take "action" and action is what they're getting. Yet another is to defend President Trump's "right" to say something. "Every president has a right to be critical of the other branches of the federal government," Pence said on CBS's Face the Nation. Perhaps my favorite is to magically define-away any problems. "By definition, whatever he does is presidential, it's just a new presidential," Newt Gingrich recently explained. "So the new presidential tweets. That doesn't mean he has to give up tweeting and start writing in longhand with a quill pen to think he's presidential."

But if you look closely, you'll see that all of these defenses are not actually, well, defenses. The issue with Trump's Twitter account isn't the medium, but the message. If he took to skywriting, and blazed Bring Me The Head of Alfredo Garcia across the Washington sky, going out and saying, "He's got an unconventional way of communicating" wouldn't quite add up to a defense, now would it?

But the more worrisome defense is the one that I fear is coming -- and I hear on social media all the time. Just trust him. He knows things we don't. He is playing chess and everyone is playing checkers. He won the primaries relying on his judgment, and we should have confidence he knows what he's doing. Place your faith in him. Or, as Ann Coulter puts it, "In Trump We Trust."

This sort of thing was creepy when Demi Moore proclaimed, "I pledge to be a servant of our president" at the beginning of the Obama administration. And it's creepy now. A staple tenet of modern conservatism -- and to a lesser extent Americanism rightly understood -- is skepticism for all politicians. As James Madison said, "The truth is that all men having power ought to be mistrusted."

What worries me about the nascent Trump administration is that he is making it difficult to defend Trump on the merits. Again, this isn't specifically a point about substance, but process. Trump's impulsively glandular style of governing and communicating frequently leaves his staff and surrogates guessing what he will do next and at a loss as to how to defend his statements. Numerous times he has undermined or contradicted his own supporters and spokesmen, particularly Sean Spicer.

When a political leader replaces fixed principles and clear ideological platforms with his own instincts and judgment, he gives his supporters no substantive arguments to rely on. Eventually, the argument to just say "Have faith" in our leader, he knows best, is the only safe harbor.

And that's not what conservatism is about -- nor, for that matter, democracy.