With Indiana a Critical Battleground, Pence Must Pick a Side

Jonah Goldberg
|
Posted: Apr 27, 2016 12:01 AM
Share   Tweet
The opinions expressed by columnists are their own and do not necessarily represent the views of Townhall.com. 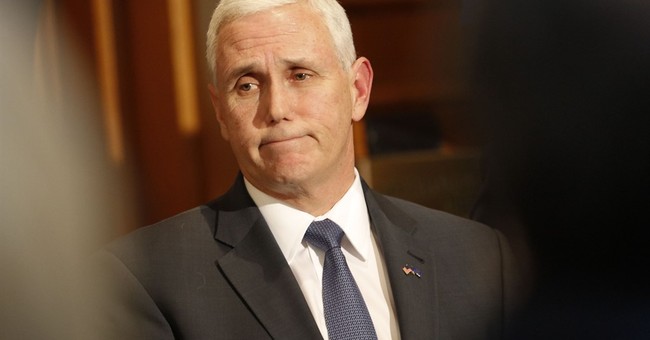 Someone slap a photo of Mike Pence on a milk carton.

The Indiana governor may not have been abducted, but he's certainly missing in action on the central question facing the Republican Party: Are you with Trump, or against him?

Pence is hardly alone on the sidelines, of course. But the crowd of wet-fingered politicians trying to determine which way the wind is blowing doesn't matter. Pence does. If Donald Trump loses the May 3 Indiana primary, it is all but certain he will fall short of the 1,237 delegates necessary to win the nomination on the first ballot. Indiana is now the Gates of Vienna for stopping the Trumpian takeover of the GOP.

That's why Ohio Gov. John Kasich and Texas Sen. Ted Cruz have struck an admittedly awkward and somewhat unsightly deal to coordinate their campaigns to keep Trump from winning there. Kasich is dropping out of the Indiana race, and Cruz will clear a path for Kasich in New Mexico and Oregon. Kasich almost immediately stumbled trying to stick to the deal, but it remains as close to a united front against the longtime Democrat turned Republican pretender as we're going to get.

And where is Pence, longtime proponent of conservative courage? In his bunker insisting that he's "for anybody but Hillary and Bernie Sanders."

To be fair, Pence is in a pickle because he's up for re-election in 2016, and the beleaguered Hoosier thinks he can't afford to alienate any Republican voters. Boo hoo.

If current general-election poll results are even remotely accurate, Trump would go down to a defeat of biblical proportions in November. His standing with women is so low, he even puts automatic Republican states such as Mississippi and Utah into play. He's wildly unpopular with young voters -- 17 percent have a favorable view of him in the latest Harvard Public Opinion Project poll. Only 37 of young Republicans view him favorably.

Trump's new de facto campaign manager, Paul Manafort, recently told fellow Republican insiders not to worry. All of this can be overcome because Trump's vulnerabilities merely reflect "personality" problems, while Clinton's reflect "character" issues. "Fixing personality negatives is a lot easier than fixing character negatives," Manafort said. "You can't change somebody's character, but you can change the way somebody presents himself."

Let's say it's possible that personality and character aren't synonymous in the minds of voters. But the notion that Trump -- a litigious, thrice-married confessed adulterer with a history of hawking snake-oil products, among other sketchy business practices -- has no character issues must have Clinton's opposition research team spit-taking lattes out their noses.

Trump says he can start acting "presidential" with a flip of a switch, but does anyone who is not besotted with Trump Kool-Aid think this is actually possible?

Pence is surely aware of Trump's unfavorables. But what he may not have considered is that if Trump loses the general election in a landslide, the recriminations will be ferocious. The postmortems will undoubtedly focus on who had a chance to stop Trump when it was possible. Among the first in the dock: the Hamlet of the Hoosiers.

Most conservatives in Indiana have rallied to Cruz's banners already. Curt Smith, the president of the Indiana Family Institute, told the Washington Examiner that Pence would "lock in his base" by endorsing Cruz, and it would give Cruz a big advantage because the Pence campaign is well-organized on the ground. Scott Walker, the governor of Wisconsin, helped deliver Cruz's blowout victory there last month. It's unlikely he'll regret that decision down the road.

Then, of course, there's the case for supporting Cruz on the merits.

Pence has spent his career cultivating a reputation as a principled, full-spectrum conservative with a populist's disdain for D.C. Beltway games. In other words, he is entirely simpatico with Cruz ideologically. With Kasich out in Indiana, Pence can no longer claim that voters don't face a stark choice. It's time for him to show that he has the courage of his convictions.