How a Biden Bid Could Help Hillary Clinton's Campaign 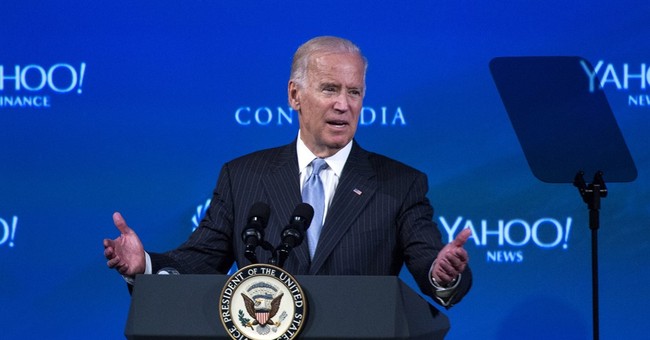 The scuttlebutt in Washington is that Vice President Joe Biden is going to throw his hat into the presidential race, which means there is at least a 50 percent chance that he will. I mean, when is the Beltway scuttlebutt ever wrong?

Under different conditions, I'd guess that, if he does announce, Biden has almost no shot at winning the Democratic primary, and that his candidacy could prove a gift to Hillary Rodham Clinton.

Historically, parties don't hold on to the White House three elections in a row. FDR managed to do it, but he had special circumstances on his side: the Depression, war on the horizon and an unprecedented, unrepeatable monopoly on political power.

In 1988, George H.W. Bush became the first sitting vice president to get elected straight to the presidency since Martin Van Buren in 1836. Bush's victory, which was far from assured, rested on two pillars. First, Ronald Reagan was very popular -- peace, prosperity and a victorious end to the Cold War will do that. Second, Bush ran against Michael Dukakis, a politician so boring he made Al Gore look like Shaft.

In short, after eight years of almost any president, Americans tend to want a fresh face. That seems to be particularly true this cycle. Never mind the abysmal "wrong track" polling numbers; just look at the crowds Bernie Sanders and Donald Trump are attracting.

That's why Biden's entry might not pose a real threat to Clinton, and could even help her. Vice presidents in general, and this one in particular, are ill-suited to promise change because they have to run on their record in the incumbent administration.

With Biden in the race, Clinton could more plausibly sell herself as a "change" candidate. Indeed, most of the punditry on her recent breaks with President Obama -- on Syria, deportation policies, the Keystone pipeline and the Trans-Pacific Partnership -- has credited Clinton's need to defuse the Sanders insurgency. These moves, however, also help Clinton make the case that she's not a "stay the course" candidate.

In 2008, the Republicans faced a lot of disadvantages: an unpopular war, the financial crisis and a president with radioactive approval numbers. But one of the more underappreciated problems they faced was that none of the GOP contenders was a surrogate for the Bush administration. Vice President Dick Cheney didn't run, nor did anyone else who could serve as a Bush stand-in. This made it exceedingly difficult for any of the candidates to distance themselves from the Bush years. The eventual nominee, John McCain, had been a thorn in the side of the White House for years, but Obama still had no problem painting McCain as the four-more-years-of-Bush candidate.

If Biden runs, he'll be the four-more-years-of-Obama candidate.

There is no way Biden, politically or psychologically, could distance himself from Obama. Biden's tendency to take any criticism of Obama personally, combined with his penchant for hyperbole, guarantee that he will overreact to any anti-Obama jabs with cries of "malarkey!"

But here's the problem with the theory I've just outlined.

While Obama is unpopular with Republicans and independents, he's still hugely popular with rank-and-file Democrats. Even those who are critical of some Obama policies are reflexively anti-anti-Obama. Moreover, the Clinton campaign has discarded the standard playbook and adopted Obama's. The New York Times reported in June that Clinton was abandoning a "nationwide electoral strategy" and opting instead to reassemble the Obama coalition. I was skeptical of this approach at the time, for the simple reason that the Obama coalition was inseparable from Obama's charisma, political novelty and, frankly, his race.

As potentially the first black president, Obama electrified voters in ways the first female president cannot, particularly when manifested by an uncharismatic woman who's been a fixture of national controversies for two decades. The task of reassembling the Obama coalition becomes harder if Clinton is seen as breaking with Obama and attacking Biden, Obama's de-facto stand-in.

Bill Clinton could probably figure out a way to triangulate between the purer left-wing change candidate (Sanders) and the purer Obama surrogate (Biden). But Bill was a very talented politician. His wife isn't.