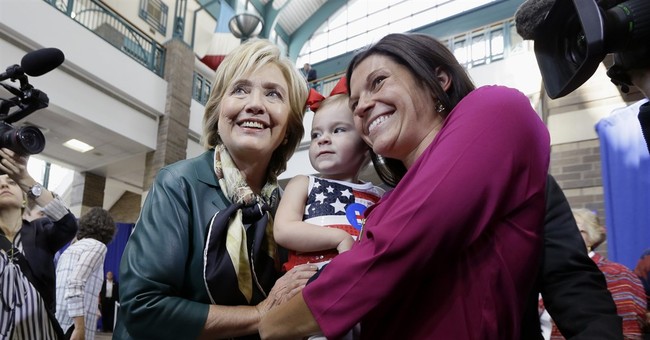 Hillary Clinton revealed on Wednesday that she opposes the Trans-Pacific Partnership trade deal, providing just the latest evidence that she is little more than political ambition wrapped in a pantsuit.

Pay attention to the press coverage, because it's fascinating: Nobody takes Clinton at her word. I'm not just referring to her conservative critics.

Slate's Jim Newell asks, "Will anyone find Clinton's position convincing?" The question is purely rhetorical. The article is headlined "Hillary Clinton Comes Out Against TPP, at Least Until the Democratic Convention."

In "First Read," a newsletter put out by "Meet the Press" host Chuck Todd and his colleagues, the lead item on Thursday was titled "Why Clinton's Trade Flip-Flop Is So Unbelievable." They write:

"Yes, Hillary Clinton's new opposition to the Trans-Pacific Partnership trade accord cleans up something she needed to do before next week's first Democratic debate. And, yes, it puts pressure on Vice President Joe Biden getting into the race (because he'd be on the only major candidate in support of TPP). But make no mistake: This flip-flop isn't believable at all."

Clinton had long touted TPP as "the gold standard" of trade deals. A tally by CNN in June found at least 45 instances where she had plumped, praised, pushed or otherwise promoted the agreement. That, of course, would make sense given that she was secretary of state when it was being crafted and had a big role in selling it.

After she left the administration, Clinton said she wouldn't take a position on TPP until it was done. She couldn't put it off any longer, so she's finally taking a stand. Well, maybe not a stand. It's more like a modified crouch.

Here's how she explained her position on PBS: "As of today, I am not in favor of what I have learned about it."

It's hard to say exactly how long it will be before that cri de coeur replaces William Jennings Bryan's declaration "You shall not crucify mankind upon a cross of gold" as the ne plus ultra of political passion and principle, but my hunch is it will take a while.

Clinton went on to explain that she was "worried that the pharmaceutical companies may have gotten more benefits, and patients and consumers fewer." She also said she was deeply worried about safeguards against "currency manipulation" not being part of the deal.

But as even the reliably liberal writers at Vox.com note, this makes no sense. The provisions -- or lack thereof -- on currency manipulation are no different than they were when then-Secretary Clinton was calling TPP the "gold standard." Meanwhile, the provisions on pharmaceutical companies are tougher than what the administration asked for.

As Vox's Timothy Lee notes, Clinton is either making up reasons to oppose TPP now, or she was utterly ineffectual then -- i.e., when she could have made a difference inside the administration.

I think this is a false choice; both things are probably true.

In fact, finding evidence that Clinton operates this way is like looking for evidence that fire is hot. In 2008, when it was in her interest, Clinton was against federal "blanket rules" on guns; now she's making extra-constitutional gun-grabbing the centerpiece of her campaign (at least this week, while a recent mass murder is still fresh in our memories). She long opposed same-sex marriage on principle, until the times required a new position. She initially thought the undercover videos of Planned Parenthood were "disturbing." But within 48 hours, she was a stalwart defender of Planned Parenthood. As more -- and more disturbing -- videos emerged, she grew more adamant that the outrage wasn't the fetal organ harvesting, but the videos exposing them.

And so on: the driver's licenses for undocumented immigrants, the Iraq War, NAFTA, taking credit for regime change in Libya, her ever-shifting stories about her email server. Hillary Clinton is like a lava lamp. Don't like what you're seeing at the moment? Wait a minute. Just don't expect anything to last.

But all of this misses what I find so fascinating. With most of these examples, it's almost impossible to find someone who takes what Clinton says or does at face value. If you're not on her payroll, or auditioning to get on it one day, or just painfully naive, you simply start from the assumption that Clinton is unencumbered by any principles that might prove inconvenient to her political ambitions.

No wonder she's running scared from a socialist.