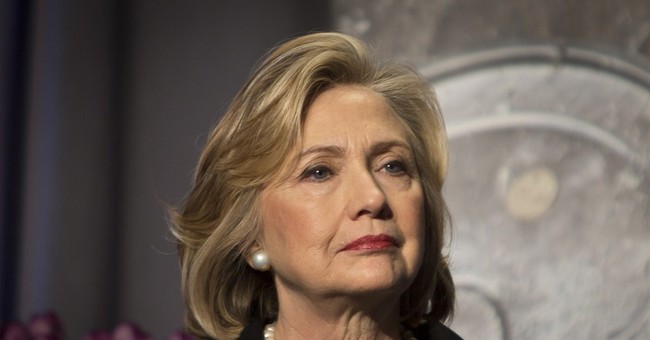 Is Hillary Rodham Clinton a McDonald's Big Mac or a Chipotle burrito bowl? A can of Bud or a bottle of Blue Moon? JCPenney or J. Crew?"

That was the opening question of a front-page Washington Post story on Clinton's effort to figure out her "brand." To that end, she has recruited a team of corporate marketing specialists to "help imagine Hillary 5.0."

"It's exactly the same as selling an iPhone or a soft drink or a cereal," Peter Sealey, a longtime corporate marketing strategist, told the Post. "She needs to use everything a brand has: a dominant color, a logo, a symbol. ... The symbol of a Mercedes is a three-pointed star. The symbol of Coca-Cola is the contour bottle. The symbol of McDonald's is the golden arches. What is Clinton's symbol?"

A columnist less charitable -- and less constrained by the rules of a family newspaper -- might be tempted to suggest some fitting symbols for Bill Clinton. But for Hillary, that's a tougher question.

Which is why the Hillary Industrial Complex is setting up a Manhattan Project to answer the question, "Who should Hillary be this time?"

They'll have their work cut out for them. More than any other politician in American life today, Hillary Clinton is an ironic figure. When she does or says anything, friends and foes alike ask, "Why did she do that?" "What was she thinking?" No one takes Clinton at face value because it seems that, after decades of public life, even Clinton doesn't really know who she is -- or at least who she should be this time around.

Her fear of giving the wrong impression -- before she can figure out what the right impression would be -- has understandably encouraged risk aversion. Even friendly reviewers proclaimed that her book "Hard Choices" read like it was written by a subcommittee tasked with avoiding saying anything.

Fortunately, that will all change soon, now that Clinton has enlisted the help of the Purpose Institute, whose co-founder Haley Rushing is known as the "chief purposeologist. Really.

Alas, Rushing is not working on the Clinton campaign, but the institute's other co-founder, marketing guru Roy Spence, is on board. By all accounts, Spence is great at what he does. Why, he conceived the "Don't Mess With Texas" anti-littering campaign.

Risking the accusation of damning Clinton with faint praise, let me say Clinton isn't litter. Nor is she a Big Mac or an iPhone.

She's a human being who has been on the public stage for nearly four decades. And yet, according to the New York Times, she has a team of 200 policy advisors trying to figure out how to "address the anger about income inequality without overly vilifying the wealthy."

Brain trusts are fine, but this isn't merely that. Since her days trying to overhaul health care, Clinton has been the kind of wonk who thinks you can solve every problem by consulting enough experts and compiling enough data. There are some tasks that lend themselves to such approaches, but electoral politics isn't one of them. Her husband knew that. He may not be able to put the formula in a strategy memo, but Bill Clinton could riff off the cuff in a way that could thread such needles with ease. That natural talent didn't become community property when Bill and Hillary got married; she doesn't have the gift.

And so she compensates by controlling the things that she can control: an ever-expanding retinue of consultants and advisers who tell her not to worry about the missing ingredient. That's what they're there for.

The hitch is that the desperate quest to find a brand is itself a kind of branding. Former Republican Florida Gov. Charlie Crist tried to rebrand himself as a liberal Democrat in his bid to get back his old job. He lost in large part because the only image that stuck was his craven political opportunism, not Charlie Crist 2.0.

No doubt many voters -- and pundits -- will happily buy whatever they come up with for Clinton. But others will focus not on what's new in Hillary 5.0, but what is a constant in all of the versions so far: a purpose defined by the pursuit of power.