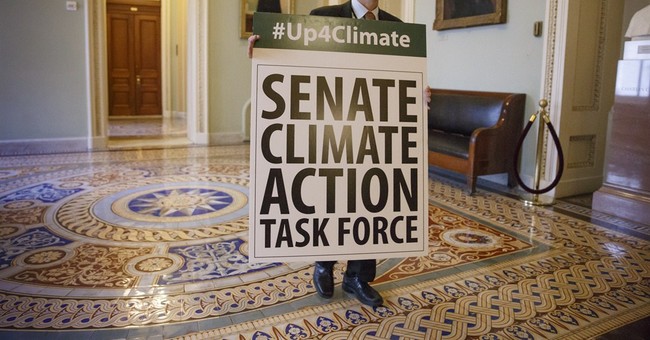 Finally, someone has come up with a way to settle the debate over climate change: Put the people on the wrong side of the argument in cages.

A writer for the website Gawker recently penned a self-described "rant" on the pressing need to arrest, charge and imprison people who "deny" global warming. In fairness, Adam Weinstein doesn't want mass arrests. (Besides, in a country where only 44 percent of Americans say there is "solid evidence" of global warming and it's mostly due to human activity, you can't round up every dissenter.) Fact-checking scientists are spared. So is "the man on the street who thinks Rush Limbaugh is right. ... You all know that man. That man is an idiot. He is too stupid to do anything other than choke the earth's atmosphere a little more with his Mr. Pibb burps and his F-150's gassy exhaust."

But Weinstein's magnanimity ends there. Someone must pay. Weinstein suggests the government simply try the troublemakers and spokespeople. You know, the usual suspects. People like Limbaugh himself as well as ringleaders of political organizations and businesses that refuse to toe the line. "Those malcontents must be punished and stopped."

Weinstein says that this "is an argument that's just being discussed seriously in some circles." He credits Rochester Institute of Technology philosophy professor Lawrence Torcello for getting the ball rolling. Last month, Torcello argued that America should follow Italy's lead. In 2009, six seismologists were convicted of poorly communicating the risks of a major earthquake. When one struck, the scientists were sentenced to six years in jail for downplaying the risks. Torcello and Weinstein want a similar approach for climate change.

This is a great standard for free speech in America. Let's just agree that the First Amendment reads, "Nothing in this clause shall be considered binding if it contradicts legal practices in the Abruzzo region of Italy."

The truth is this isn't as new an outlook as Weinstein suggests. For instance, in 2009, New York Times columnist Paul Krugman insisted that "deniers" in Congress who opposed the Waxman-Markey climate change bill were committing "treason" while explaining their opposition on the House floor. (That same year, Krugman's fellow Timesman Thomas Friedman wrote that China's authoritarian system was preferable to ours, in part, because it lets "enlightened" leaders deal with climate change.)

"The fact is that the planet is changing faster than even pessimists expected," Krugman insisted. How fast the earth is changing is open to all kinds of debate, but short of an asteroid strike it won't change as fast as the global warming pessimists have claimed. For example, in 2008, Al Gore predicted that the North Pole ice cap would be ice-free by 2013. Arctic ice, which never came close to disappearing, has actually been making a bit of comeback lately.

Gore's prediction -- echoed by then-Sen. John Kerry and countless others -- was always ridiculous hyperbole. But even most serious, non-hyperbolic, computer-modeled predictions have overestimated the amount of warming we've experienced. The United Nations Intergovernmental Panel on Climate Change has had to retract several histrionic predictions, such as its erroneous prophecy that the Himalayan glaciers would be gone by 2035.

Its new report, out on Monday, contains a new raft of dire prophecies requiring trillions in new spending. If I greet it with skepticism, shall I pack a toothbrush for my trip to jail?

Climate-change activists insist that in science, revisions are routine, and that such corrections prove the good faith of scientists. Even if that's true, one might still note that incentives are unhealthily arranged so that even well-intentioned researchers are encouraged to exaggerate the dangers of climate change and discouraged to criticize hyperbole. Moreover, were it not for the skeptics and deniers, many such corrections would never have been brought to light. (My own view is that man plays some role in warming, but the threat is overblown and the popular remedies range from trivial to unaffordable to ridiculous.)

The real problem is that political activists and many leading institutions, particularly in the news media and academia, are determined to demonize any kind of skepticism -- about the extent of the threat or the efficacy of proposed solutions -- as illegitimate idiocy.

That attitude is unscientific and undemocratic enough. But it sure beats calling for your opponents to be thrown in the gulag for disagreeing with you.