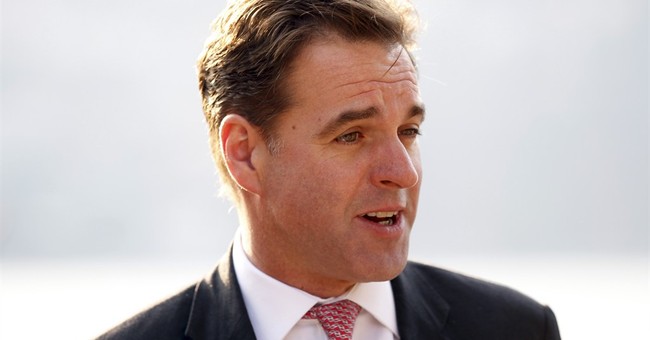 At an investment conference last week, Harvard historian Niall Ferguson created a huge mess for himself. He glibly speculated that maybe because economist John Maynard Keynes was a childless, "effete" homosexual, he embraced a doctrine that favored immediate economic gratification. Keynes' bon mot "in the long run, we are all dead" takes on new meaning when you realize he didn't have kids to worry about.

Following the usual script, but at a much faster clip, an uproar ensued on Twitter and in various blogs. Ferguson quickly offered an apology that rivaled John Cleese's in A Fish Called Wanda in its abjectness. It was all over before the mob could get their pots of oil to full boil.

Part of Ferguson's bad luck was to recycle an ancient jibe that too many people were too ignorant to know was old hat. Polite people didn't refer to homosexuality much in public until relatively recently, so the barbs were usually aimed at Keynes' childlessness. For instance, legendary economist Joseph Schumpeter wrote that Keynes "was childless and his philosophy of life was essentially a short-run philosophy."

This claim didn't solely come from gay-bashers and right-wingers. For instance, William Greider, a left-wing writer, argues in Secrets of the Temple: How the Federal Reserve Runs the County that Keynes' homosexuality contributed to his "defiance of social convention" and served as backdrop for his "rebellion against economic orthodoxy."

Still, I understand why Ferguson's comment aroused ire. It sounded like he was trying to discredit a widely accepted idea -- Keynesianism -- by throwing dirt on that idea's author. Worse, it trafficked in the now utterly verboten practice of ascribing any negative connotation whatsoever to homosexuality.

"In one fell swoop," economics writer James Pethokoukis observed, "Ferguson managed to clumsily and unexpectedly -- and unnecessarily -- merge current policy debates about same-sex marriage and parenting with arguments over the proper level of fiscal austerity when economies stumble. Not an easy trick."

Still, I'd really like some clarity about what the rules are now. Because I could swear that spelunking into the hidden caves of peoples' personal lives to shed light -- or cast aspersions -- on their public personas and preferred policies is the height of scholarship and wisdom these days. "The personal is political" is what my feminist professors taught me in college.

Isn't the core of diversity mania the idea that there is some irreducible, ineluctable essence to being male or female, gay or straight, black or white? Supreme Court Justice Sonia Sotomayor, for instance, believed that a "wise Latina" brings something to the law a white man might not.

And if childlessness is never relevant, politicians and pundits must immediately stop prefacing their opinions with "as a mother" or "as a grandparent," etc.

At least when it comes to the approved boogeymen, not only are their private views on race, religion, sex and morality fair game for scorn and ridicule, they're invitations to glibly snarky speculation about their relevance. If that's not the case, then someone better tell columnists like Maureen Dowd to hang up their spurs.

I remember when then-New Yorker writer Sidney Blumenthal tried to discredit virtually all of anti-communism on the grounds that Whittaker Chambers was bisexual. For several years, a cadre of historians and pundits has been on the great snipe hunt to prove that Abraham Lincoln was gay. Why bother if such things are both outrageous and irrelevant? Oh, and angry readers who think they can glean my whole worldview by the fact my last name is Goldberg, I think the game's up for you too.

A recent National Association of Scholars report about Bowdoin College found that until recently the school offered a class on "Queer Gardens." It examined "the work of gay and lesbian gardeners and traces how marginal identities find expression in specific garden spaces." That's scholarship! But suggesting Keynes' "marginal identity" found expression in his writings is outrageous homophobia?

Other than breaking some politically incorrect taboos, it seems to me Ferguson's real mistake was confusing biographical relevance for policy relevance. Keynes' sexuality, morals and background are relevant to understanding the man. But they aren't necessarily relevant to his ideas.

Our culture is so obsessed with authenticity and hypocrisy; we think ideas are inextricably bound to the lifestyles of their authors. If it was revealed that Milton Friedman was -- fill in the blank -- a Baal worshiper, necrophiliac, whatever, it wouldn't change my respect for his economic ideas. Private motives are interesting, but public arguments are what's supposed to matter in a democracy. Ferguson crossed that line and apologized for it. If only some of his detractors would do likewise.