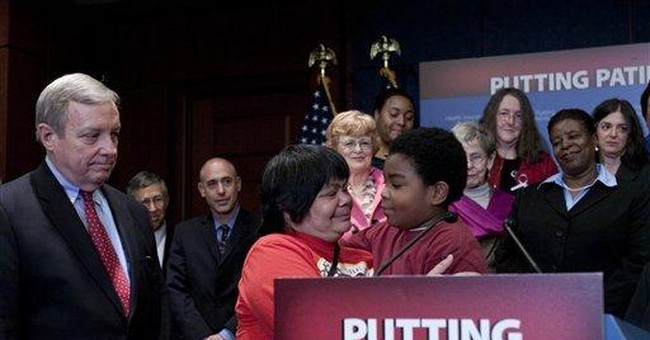 The time for talk is over.

So proclaimed the most talkative president in modern memory. I can't remember when Barack Obama said that. Maybe it was during the first "final showdown" on health care. Or maybe it was the third. The fifth? It's so hard to tell when pretty much every week since the dawn of the Mesozoic Era, Obama or Nancy Pelosi or Harry Reid has proclaimed that it is now Go Time for health-care reform.

So you'll forgive me if I'm somewhat skeptical about the possibility that the health-care reform debate is about to come to an end.

The president recently said, "Everything there is to say about health care has been said, and just about everybody has said it."

But wait. If everything, pro and con, has been said about the subject, by everybody, that means someone isn't telling the truth, right? I mean, if you've said X and not-X, that means you've probably said something that isn't true.

That, at least, is the impression I got this week listening to Obama make his closing arguments for health care at rallies in Pennsylvania and Missouri. It's telling that the president -- long in favor of a single-payer system -- is selling his health-care plan on the grounds that it will increase "choice" and "competition," reduce "government control" and "give you, the American people, more control over your own health insurance."

You know your sales pitch for a government takeover of health care hasn't worked when you have to crib rhetoric from free-market Republicans. And that's after you've already tried to pin your plan's unpopularity on the ignorance of the American people.

Obama's talking points track reality about as well as the screenplay for "Avatar." Indeed, the same week he was hawking competition, choice and less government, Obama backed a new Health Insurance Rate Authority that would do even more to cement big health insurance companies into their new role as government-run utilities.

This latest gambit is of a piece with the White House's demonization of the health-insurance industry. I have no love for that industry myself, but let's get some perspective. As of August, the health-insurance industry ranked 86th in terms of profit margins -- behind anemic industries such as book publishing (38th) specialty eateries (71st) and home furnishing stores (84th), according to data compiled by Mark Perry of the American Enterprise Institute.

Insurance companies account for less than 5 percent of American health-care spending -- less than hospitals (31 percent), doctors (21 percent) and medicine (10 percent). But because health-insurance companies are unpopular, Democrats are beating up on them, even though if Democrats are serious about containing costs, the cuts will have to come from those other slices of the pie.

But enough with the substance. The health-care debate ceased being about substance a long, long time ago. Fair or not, the Democrats' plan is unpopular, period. There is simply nothing Obama can say that will change that fact before Democrats vote for it. That hasn't stopped him from talking out of every side of his mouth. But outside the Obama bunker, no serious pollster, pundit or pol in Washington disputes this basic point: Obama cannot take the stink off this thing.

And that's why the Democrats are contorting themselves like a yoga swami in a hatbox trying to figure out how to pass it. (Note: If it were simply popular among Democrats, it would have passed months ago.) The latest idea involves the "Slaughter Solution" -- named after House Rules Committee Chairwoman Louise Slaughter -- which would allow the House to fix-and-pass the Senate version of the bill without ever voting on the senate version, or something like that.

But here's the thing: There is no "over" to this debate. Obama, Pelosi & Co. have demonstrated time and again that no deadline is final if it means losing. Meanwhile, if ObamaCare passes, Republicans will run on a promise to repeal it, and that means we'll be debating health-care reform at least through 2010. Then, depending on how the election goes, the repeal debate will become part of the legislative process. That will in all likelihood carry the debate into the 2012 presidential election. In other words, there will be time for talk as far as the eye can see.

Now, part of me thinks this is too cruel a future to contemplate. I can't remember whether it was pederasts or mattress-tag removers, but I'm pretty sure someone in Dante's Inferno is condemned to spend eternity listening to a C-SPAN panel on community rating, preexisting conditions and rate pools.

But it's a better prospect than losing. That's one point that has bipartisan support.