The New Life of the Grand Old Party 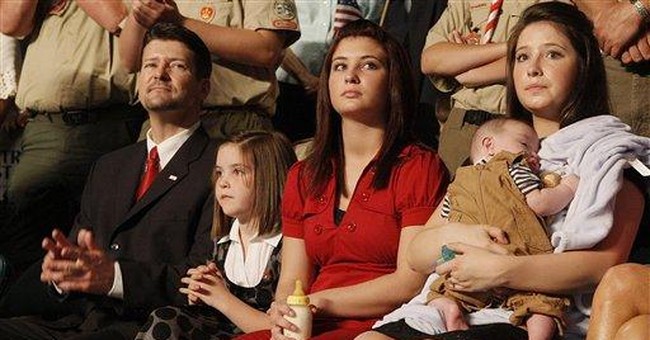 ST. PAUL, Minn. - The biggest "prize" so far in the quest to destroy Alaska Gov. Sarah Palin's vice-presidential candidacy is the "news" that her unmarried daughter is pregnant. I have little to say about that because I don't think the press should be saying much more about it.

But what is remarkable is how little that or other revelations matter to the GOP rank and file. Simply put: They love Sarah.

This is my sixth Republican National Convention, and I've never seen anything remotely like the excitement Palin has unleashed. Some compare it to the enthusiasm for Ronald Reagan in 1976 or 1980. Even among the cynics and nervous strategists, there's a kind of giddiness over John McCain's tactical daring in selecting the little-known Alaskan.

Readers of National Review Online - a reliable bellwether of conservative sentiment - flooded the site with e-mails over Labor Day weekend. The messages ran roughly 20-1 in almost orgiastic excitement about the pick. On Friday, one reader expressed Christmas-morning delight over the gift of Palin, proclaiming that McCain had just "given us our Red Ryder BB gun."

Hundreds of NRO readers announced that they were finally donating to McCain after months of holding out. Many had hard feelings toward the senator, who too often defined "maverick" as a willingness, even an eagerness, to annoy conservatives. They weren't kidding: Between the Palin announcement Friday and Monday morning, the McCain camp raised $10 million. This enthusiasm reflects how, although the party wants Barack Obama to lose, it is just now getting excited about a McCain win.

The naysayers argue Palin undermines McCain's core message so far: "experience" and the necessary foreign policy expertise for a dangerous world. They say choosing her was a gimmick that runs counter to McCain's mantra about country before politics, particularly given his age and health record.

If Palin fumbles badly in the next few weeks, the critics will surely be proved right. And one doesn't have to be obsessive about liberal media bias to recognize the media's desire to Quayle-ize her.

But what if she doesn't fumble? What if McCain's gut was right?

Then, picking Palin just might go down as one of the most brilliant political plays in American history.

The experience theme was not going to carry McCain to victory. This is a change election. Hillary Clinton, after all, ran on experience and got beat by Obama, a former community organizer and state senator. McCain weakened Obama with the "not ready to lead" line, but to win he needed to promise change - i.e. "reform" - too.

But the reform message would have sounded implausible with almost any other VP pick, save perhaps Louisiana Gov. Bobby Jindal or Minnesota Gov. Tim Pawlenty. Moreover, although the GOP base generally agrees with McCain's fiscal conservatism, it doesn't get excited by his reformer shtick. Palin reinforces the reform theme but, at the same time, reassures the base enough to give McCain maneuvering room to woo moderates and independents.

Not surprisingly, the bulk of attention has been on the fact that she is a woman (though few have noted that the party's enthusiasm for her runs counter to the caricature of conservatives as irredeemably sexist) and on the supposed effort to sway Clinton voters. That's been oversold. As much as anything, the Palin pick is a response to the Democrats' effort to cast themselves as change agents and friends of the middle class.

Last Wednesday in Denver, Obama's running mate, Joe Biden, gave his stemwinder about families huddled around their kitchen tables trying to make ends meet. The next day, McCain settled on Palin, who can actually claim to be part of such a family. Her husband is a member of the United Steelworkers. She got her start as a PTA activist and "hockey mom" who took on the corrupt Alaskan political machine. Unlike Obama, who played ball with the notorious Chicago machine, Palin took dead aim at the bosses of her own party.

The Obama campaign smugly - and foolishly - ridicules Palin's work as a small-town mayor. But who can better empathize with the plight of working families: Biden, a trial-lawyer-friendly senator since the Jurassic era, or a woman with five kids and a blue-collar spouse? Obama performed badly with working-class rural voters in the primaries. Joe "the Pride of Scranton" Biden is supposed to help on that front. Ridiculing small towns might not help the cause.

Meanwhile, many recently moribund Republicans here are hopeful that the party has successfully rebranded itself with Palin.

The enthusiasm may not last. But for now, she's the life of the party.