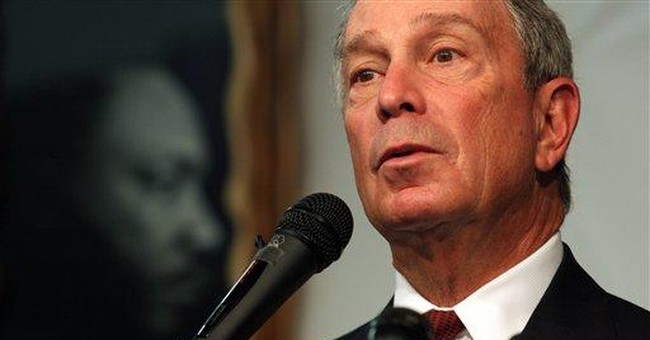 Younger readers may not remember the opening to "The Outer Limits," a pretty good sci-fi rip-off of "The Twilight Zone" (and they may have only a fuzzy understanding that TVs used to have knobs to control the horizontal and vertical). But as they read the news these days, maybe they can find a new appreciation for the creepy feeling of powerlessness that opening once gave viewers.

For instance, California recently proposed revisions to its housing code that would require all new or remodeled homes to have a "programmable communicating thermostat." Equipped with special "nonremovable" FM radio receivers, these devices would allow state power authorities to set the temperature in your home as they see fit. Ostensibly to manage demand during "price events" and other "emergencies," you would basically cede control of your home's heating and air conditioning to the state (when and if state officials wanted to exercise it).

Taken by itself, this may not sound so scary - and indeed, California recently sent the thermostat proposal back for further study after some public criticism. But then again, as Gulliver learned, one Lilliputian is an intriguing freak. Two are kind of cool. But 10,000 teeny-weeny folk tying you down?

Of course, tying Americans down, limiting their options, foreclosing on any path not acceptable to today's social controllers of the right and the left is perhaps the defining spirit of our age.

In New York City, where Mayor Michael Bloomberg has become a champion of a supposedly new "post-partisan" movement of for-your-own-good-government, trans fats are off the menu. Smoking has become the ceremony of heretics and outlaws. In 2006 alone, New York City banned - or attempted to ban - pit bulls; trans fats; aluminum baseball bats; the purchase of tobacco by 18- to 20-year-olds; foie gras; pedicabs in parks; new fast-food restaurants (but only in poor neighborhoods); lobbyists from the floor of council chambers; vehicles in Central and Prospect parks; cell phones in upscale restaurants; the sale of pork products made in a processing plant in Tar Heel, N.C.; mail-order pharmaceutical plans; candy-flavored cigarettes; the Ringling Bros. and Barnum & Bailey Circus; and Wal-Mart.

David Harsanyi, author of "Nanny State," reports that there are "No Running" signs in Florida playgrounds, perhaps to make it easier for the authorities to catch toddlers and outfit them with mandatory helmets, chin guards and corrective shoes.

Nor is this a purely American phenomenon. Paris - where smoking a Gauloise while tucking into some runny cheese has long been the national pastime - recently banned smoking in bars, restaurants and cafes. Britain has gone just plain bonkers, updating its omnipresent anti-crime and anti-terror security cameras to catch people eating in their cars while on the road, now a major offense.

In Canada, there are now a slew of public service announcements that use fear, terror and gruesome imagery to encourage workplace safety. You can find them on YouTube. My favorite features an attractive young female chef in the kitchen of her restaurant, gushing that she's about to get married and have a wonderful life. Unfortunately, proper safety precautions weren't taken, and in the middle of the ad, while she's speaking to the camera, she slips and falls, pouring boiling oil on herself. She screams in agony. We see her scalded hands clenched in pain, the singed flesh on her face peeling off. So remember kids, safety never takes a vacation!

Much of this, as Reason magazine's Jacob Sullum has long argued, stems from the "totalitarian" temptation inherent to seeing health care as a sub-category of politics and policy. When government picks up the tab for health costs, it inevitably feels it is responsible for curtailing them through "prevention," which can often elide into compulsion. As Faith Fitzgerald, a professor at the University of California-Davis School of Medicine, put it in the New England Journal of Medicine: "Both healthcare providers and the commonweal now have a vested interest in certain forms of behavior, previously considered a person's private business, if the behavior impairs a person's Œhealth.' Certain failures of self-care have become, in a sense, crimes against society, because society has to pay for their consequences."

But there's another factor at work as well. We are seeing a return to the idea - first championed by social planners in the progressive era - that government can and should play the role of parent. For instance, Michael Gerson, once a speechwriter for President Bush, advocates a new "heroic conservatism" - an updating of his former boss' compassionate conservatism - that would unleash a new era of statist regulations. On the stump, Hillary Clinton refers to her book, "It Takes a Village," in which she argued that we all must surrender ourselves to the near-constant prodding, monitoring, cajoling and scolding of the "helping professions." Clinton argues that children are born in "crisis" and government must respond with all the tools in its arsenal from the word go. She advocates putting television sets in all public gathering places so citizens can be treated to an endless loop of good parenting tutorials.

Mike Huckabee, who represents compassionate conservatism on steroids, favors a nationwide ban on public smoking. Everywhere, from Barack Obama to John McCain, we are told that our politics must be about causes "larger than ourselves." What we used to think of as individual freedom is now being recast as greedy and selfish.

We've seen this before. The original progressives - activist intellectuals, social reformers, social gospel ministers and other would-be planners in the late 19th and early 20th centuries - touted "social control" as the watchword of their movement. One reason the progressives supported World War I so passionately was not because they supported the aims of the conflict but because they loved domestic mobilization. John Dewey, the American philosopher and educator who sang the praises of the "social benefits of war," was giddy that the conflict might force Americans "to give up much of our economic freedom. ... We shall have to lay by our good-natured individualism and march in step." The progressives believed that people needed to be saved from themselves. Journalist and commentator Walter Lippmann dubbed average citizens "mentally children and barbarians." "Organized social control" via a "socialized economy" was the only means to create meaningful freedom, argued Lippmann, Dewey and others. And by free, the progressives meant free to live the "right" way.

A similar dynamic defined much of Nazi Germany. Nazi Youth manuals proclaimed that "nutrition is not a private matter!" "Gemeinnutz geht vor Eigennutz" - essentially, all for one, one for all - was the rallying slogan of the Nazi crackdown on smoking, the first serious anti-tobacco campaign of the 20th century. The first systematized mass murder in Nazi Germany wasn't of the Jews but of the "useless bread-gobblers" and other lebensunwertes leben ("life unworthy of life"). The argument was that the mentally ill, the aged, the infirm were too much of a drain on the socialist economy.

Now, nobody thinks anything like that is in store for us these days. But we can come far short of that and still overshoot the mark of what is desirable by a wide margin.

More important, it's worth remembering that liberty is usually found in the small joys of daily life. In "Democracy in America," Alexis de Tocqueville warned: "It must not be forgotten that it is especially dangerous to enslave men in the minor details of life. For my own part, I should be inclined to think freedom less necessary in great things than in little ones."