John Stossel
|
Posted: May 12, 2018 12:01 AM
Share   Tweet
The opinions expressed by columnists are their own and do not necessarily represent the views of Townhall.com. 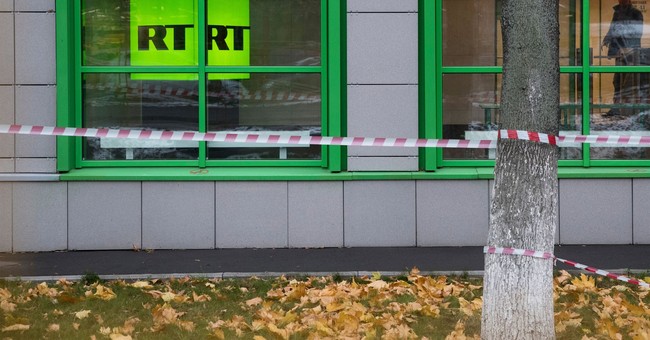 Why does American journalist Abby Martin report for media run by socialist murderers?

I'd never heard of teleSUR before researching this week's YouTube video. But teleSUR matters because its videos get millions of views. Latin America stays poor because people believe socialist propaganda.

Another says that "Trump is killing our brains with Nazi-era chemicals."

Few viewers know that teleSUR is funded by the tyrants who control Cuba and Venezuela.

Venezuela, once rich, has been bankrupted by its socialist rulers. More than a million Venezuelans have fled to neighboring Colombia and Brazil.

Those who don't flee go hungry. One study found Venezuelans have lost, on average, more than 20 pounds. Hundreds of children have died of starvation. But when other countries and philanthropists offer help, Venezuela's rulers refuse it.

Instead, they spend their dwindling funds on teleSUR propaganda videos.

One shows a picture of Warren Buffet's son while telling viewers, "Philanthropy is a scam that allows the super rich to influence global affairs ... as if capitalism were the solution, not the cause of world problems."

Excuse me? Capitalism is a solution. In the last few decades, capitalism has lifted billions of people out of miserable poverty.

By contrast, in Venezuela, many store shelves are empty.

How can teleSUR put a positive spin on that? They hire "useful idiots," as Communists once called naive leftists who inadvertently spread tyrants' propaganda. Today, one person they pay is former Californian Abby Martin.

Martin produced a teleSUR video that shows Venezuelan store shelves filled with goods. Martin narrates, "We just went to about five different supermarkets and the shelves were fully stocked ... (W)hile it is true there are shortages, it seems like you are very able to find things for everyday life, no problem."

I wanted to interview Martin, but she didn't respond to my interview requests.

Back when Martin worked for RT, at least she criticized Russia for invading Ukraine. But she also used her RT airtime to praise tyrants like Hugo Chavez.

"It is undeniable that under his leadership the poorest in the country were empowered," Martin said on RT.

I wish Martin were more like her former RT colleague Liz Wahl. On RT, Wahl said:

"I face many ethical and moral challenges ... I cannot be a part of a network funded by the Russian government." Then she quit, on-air. She got a job with a legitimate news network.

After criticizing Russia's invasion of Ukraine, Martin stayed at RT for another year, and now she works for teleSUR.

Her videos describe "U.S. death squads" and claim that NATO and the U.S. lead "constant wars of aggression." In the U.S., racism is "entrenched ... political opposition quashed" while the U.S. "empire ... runs on death and destruction and kills thousands of our brothers and sisters every day."

"Even well-meaning people here in the United States, I see them sharing teleSUR material all the time," he told me.

Governments, especially socialist governments, like to present themselves as thinking only of "the people," but they have agendas just like private-sector con artists trying to sell you goods.

Government sales pitches are harder to detect because they don't sell products like cars or shampoos. But they still sell their bad ideas by showing only the worst aspects of the alternative, the private sector.

Update: Martin says that my characterization of her work at teleSUR and RT suggests that she lacked editorial independence. I never meant to imply that. I don't think I did. I'm sure Martin sincerely believes what she reports. In my opinion, that does not make her work for socialist state-run media less harmful. I encourage readers to watch Martin's reports and decide for themselves.