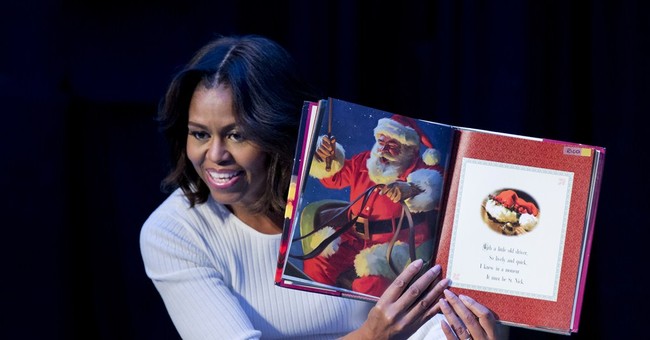 It's the season for giving.

That doesn't mean it's the season for government.

Government creates loyalty in the minds of citizens by pretending to be Santa Claus, doling out gifts and favors. Politicians claim they help those unfortunates who aren't helped by coldhearted capitalism.

When I was in college, President Lyndon Johnson declared "an all-out war on human poverty. ... For the first time in our history, it's possible to conquer poverty." I believed him. But then I watched government poverty programs fail. America spent trillions of your dollars on the poor, and the poor stayed poor.

Actually, the poverty rate did fall after the "War on Poverty" began. But it had already been falling prior to initiation of welfare. Sadly, the poverty rate stopped falling about seven years after Johnson's programs began, mostly because government handouts encouraged people to be dependent.

Simple capitalism does much more for poor people. On my show this week, Marian Tupy, editor of HumanProgress.org, speculates on why people don't appreciate that.

"Our minds evolved tens of thousands of years ago when we lived in small groups of between 50-200 people," says Tupy. "We would go out, kill game, bring it back, share it." The idea of everyone getting an equal share still makes us feel warm and cozy.

"Some of the anti-capitalist impulse goes back to that hunter-gatherer mentality and not comprehending the complexity of the market economy," says Tupy. "The complexity outpaced our ability to understand it.

But even those who don't understand markets should open their eyes and acknowledge its benefits: World-wide, wherever economic freedom is allowed, millions of people have lifted themselves out of stoop labor and miserable poverty.

Of course, not everyone can reap the benefits of markets. The sick, the mentally ill and other truly helpless people need a hand.

But why assume government must provide that help? Government doesn't do anything very well. Why not let private charity handle it?

I once assumed there was too much poverty for private charity to make much of a difference. But now I realize there is plenty of money, and private charity would do much more if government didn't discourage it.

When the welfare state took over poverty relief, it crowded out "mutual aid" societies that the poor ran for themselves.

They were like a cross between private unemployment insurance and "moose" or "elks" lodges that encouraged members to help each other out. They were better at helping the poor because their members, unlike government poverty workers, were free to make judgments about who deserved help and who didn't.

Today, there are fewer mutual aid societies because people say, "Why do it myself when we already have giant welfare bureaucracies? My taxes pay for Obamacare, food stamps, housing vouchers and so on. I'll let the professionals handle it."

But those "professionals" do a poor job.

Fortunately, charities still try to do what government cannot do. I give money to the Doe Fund, an organization that helps addicts and ex-cons discover the benefits of work. I give because I can see the results: Doe Fund participants work as caterers, exterminators and street-cleaners, and they do it with a spring in their step.

Somehow, the charity teaches these men (they only work with men) to take pride in work. That pride changes people. Unlike other ex-cons, those who are Doe graduates rarely go back to jail.

If government didn't discourage it, more charities would do even better work with the poor. Human beings don't sit around ignoring the suffering of their neighbors. But we are most likely to neglect these moral tasks when government insists it has everything covered.

Get government out of the way and just watch what we can do.