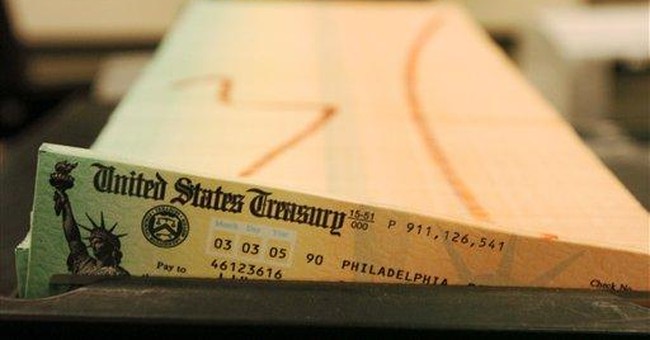 President Obama says he want to make society more fair. Advocates of big government believe fairness means taking from rich people and giving to others: poor people; or people who do things politicians approve of, like making “green” energy equipment (Solyndra); or old people (even rich ones) through Social Security and Medicare.

The idea that government can “make life fair” is intuitively appealing to people -- at least until they think about it. I’ll try to help.

Or as economist Art Laffer asked on my Fox Business show, is it fair that American corporations pay the highest corporate tax rate in the world?

Beyond taxes, again quoting Moore, “Is it fair that President Obama sends his two daughters to elite private schools that are safer, better-run and produce higher test scores than public schools in Washington, D.C. -- but millions of other families across America are denied that free choice and forced to send their kids to rotten schools?”

No. Parents ought to be able to spend their education money at any school they choose.

To many, it is intuitive that such inequality is necessarily unfair. If someone makes his income by looting the taxpayers -- sure, that’s unfair. His gains are ill-gotten, and honest taxpayers are out hard-earned money. But there’s nothing unfair simply in making more money through productive work. People have a range of talents and ambitions. Some will serve consumers better than others and therefore make more money. Government should not worry about that.

It should spend its time abolishing political privileges so that people compete fairly -- in the marketplace.

You want to know what’s unfair? Social Security. Progressives say Social Security is the best-working government program ever, but they are wrong. I explored this on my show recently with Charles Goyette, author of “Red and Blue and Broke All Over.”

“Think about Social Security in terms of what would happen if a private company came up with a deal like this,” Goyette said. “The president of the company says, we’ve got to sell some new policies tomorrow to pay you what you’re due when you cash in today. They’d lock these guys up.”

Goyette was referring to the fact that your payroll taxes are not invested. The money is spent right away, and the government counts on new money from current workers to pay retirees. The touted trust fund doesn’t exist.

“There’s no trust. There’s no fund. There’s no security. And the really bad thing -- this is what’s really destructive -- it has changed the propensity of the American people to save for themselves. ... We’re creating a multigenerational calamity. And it’s right at our doorstep.”

We’ve taught people to be dependent. But dependence robs us of our dignity and keeps poor people poor.

Few politicians will touch the issue because seniors vote. And so trouble is not far up the road.

“We’ve loaded kids up with a debt that they will be burdened by for the rest of their lives,” Goyette said. “What kind of people, what kind of country does something like that?”

It’s even worse for Medicare. We’re talking tens of trillions in unfunded liabilities. Where’s that money going come from? Since seniors resist cuts, will politicians keep their promises by devaluing the currency? And why do the guardians of fairness never talk about this?

It might seem reasonable for government to make life more fair. But when it takes your money and freedom trying to do that, life becomes less fair. Everyone is poorer and less free. As government grows, individual liberty shrinks. That’s not fair.

It might help if instead of talking about fairness, we talked about justice: respecting other people, their freedom and their honestly acquired belongings. Real fairness, or justice, requires limiting government power. That means the same rules for everyone. No special favors. No handouts. Or, in Frederic Bastiat’s phrase, no “legal plunder.”