Who Will Run America? 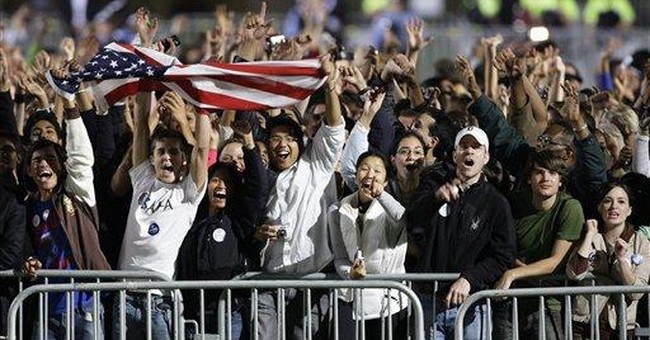 Some of you think you went to the polls yesterday to pick someone to run America.

"Who do you want to have run this country?" Chris Matthews asked repeatedly on MSNBC.

"One of these guys is going to be running the country," said Michael Goodwin of the New York Daily News.

"That has to be a joke -- or a misunderstanding," said George Mason University economist Walter Williams on my recent TV special, "John Stossel's Politically Incorrect Guide to Politics".

Williams pointed out that the White House doesn't govern what happens in your house. And a president certainly cannot control the economy. We, all of us, run the country.

"Politicians have immense power to do harm to the economy. But they have very little power to do good," Williams says.

The failure to understand this is at the root of many of our problems.

"Most of life is outside the government sector," says David Boaz of the Cato Institute. "Most change in America doesn't come from politicians. It comes from people inventing things and creating. The telephone, the telegraph, the computer, all those things didn't come from government. Our world is going to get better and better, as long as we keep the politicians from screwing it up."

It's easy to find examples of government screwing up what it should have left alone.

Take farming. Every year politicians promise to save the family farm, and this year, Congress passed another $300-billion farm bill. More subsidies after generations of subsidies. John McCain opposed the bill, saying that it will "do more harm than good." But Barack Obama and most of Congress supported it.

"I don't think we want anybody in this country to starve," Rep. Randy Kuhl, a Republican from New York, added.

"They go out of business, and then they'd be forced to move elsewhere and find different jobs," Kuhl replied.

"But if they don't have a job, then they're going to starve."

He and others in Congress also claim that subsidies "insure a food supply for this nation."

It's the free market that "insures" the food supply. You may not know that most farmers get no subsidies. Growers of apples, bananas, broccoli, cabbage, cantaloupe, carrots, cauliflower, grapes, lemons, limes, lettuce, onions, oranges, peaches, pears, pineapples, potatoes, spinach, squash, tangerines, tomatoes and dozens of other crops are on their own. There's no cabbage crisis or pineapple panic.

The farm bill doesn't even keep its other promise: saving family farms.

It's why although Nebraska corn farmer Mike Korth received about half a million dollars in subsidies, he's still against the farm bill. "We sold this on the fact that this is helping the family farmer and the small beginning farmer. It's not. It's hurting them."

That's because most subsidies go to those that are best at manipulating government: the agribusiness giants. Small farms can't compete.

A Federal Reserve Bank of Kansas City study found that the more farm aid a county gets, the more likely it is to lose population.

So not only do farm subsidies cost every taxpayer $550 per year, they also raise food prices by paying farmers not to grow certain crops. Other crops are subsidized and exported, destroying the livelihoods of poor farmers in the Third World.

"This is just a crazy system," said the Cato Institute's David Boaz (www.cato.org). "It's left over from the 1930s, left over from the Depression. And it's a great example of how nothing is as permanent as a temporary government program."

Of course, without subsidies, some farms would go out of business. That's OK, says Walter Williams. It's the creative destruction that makes America strong.

"The guy who delivered ice to my house, he doesn't have a job because we have refrigerators. We're better off. We would have been held back if we had tried to save his job."

I said to Congresswoman Jackson Lee, "If this works so well, why don't we just subsidize everything?"

Her answer? "You don't want to push us."

How frightening is that?