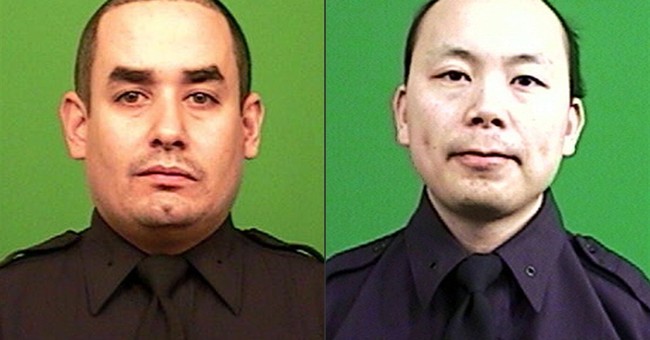 Fine, I’ll say it again: I blame Eric Holder and Barack Obama for the assassinations of officers Rafael Ramos and Wenjian Liu.

And Nancy Pelosi and Harry Reid and Elizabeth Warren and the whole rotten Democrat Party that uses and abuses race, ethnicity and gender to hide their own shortcomings.

A free society has many shortcomings but it also has the remedies to fix them if we’d be patient.

But what can we expect when our president and the highest law enforcement officer of the land—along with the party that nurtures them-- routinely sides with criminals over the rest of us?

One would think that just out of a sense of self-preservation and common sense Holder and Obama would see that their grandstanding on Ferguson, on Sanford and on issues of race, ethnicity and gender would never end well.

For Ramos and Liu it had the worst of all possible endings. Unless the officers who were killed were “white” Hispanic and “white” Asian, then I would say that police of “color” have more to fear than anyone. `

“The shooting occurred around 2:45 p.m. as officers Rafael Ramos and Wenjian Liu sat in their patrol vehicle keeping watch over the Tompkins Houses,” reports the Wall Street Journal, “as part of a crime-reduction effort launched in May following an uptick in shootings at city housing projects, particularly those in Brooklyn, police said.”

They got shot protecting the very people the president says the police don’t care about.

After all the noise about Tea Party violence, which never happened, you knew, you just knew that liberals would finally kill a cop( or cops) out of the Ferguson affair and other racial lies they tell.

It’s just karma, to use a favorite liberal word.

Conservatives would say this instead: You will know them by their fruits.

As rotten as they are.

Here’s the most troubling thing about Holder and Obama—the whole liberal-progressive complex, but those two especially—is that they lack the capacity for self-examination and growth. They lack the ability to reflect upon mistakes and take ownership for them.

And in this way, Obama’s presidency makes a lot of sense.

Successful people generally have the capacity to make adjustments to their thinking along the way; to deal with reality as it is, not as one would have it be.

A case in point is the blue-ribbon, crony style panel that is supposed to improve relations between cops and populations of “color” that Obama just announced.

And if you didn’t see THAT coming, then you’re colorblind.

The committee is a stacked deck of mostly professionals who make their living dealing with issues of race for liberals to pander on. It’s just another attempt to community organize, with an end result that winds up with votes for Democrats.

Instead of making real progress on real issues of race—like unemployment, health, poverty, education, divorce and the single biggest marker for poverty, single motherhood—Obama and Holder go for the cheap vote.

For this, and other sins, I blame them.