Peace! Peace! There is No Peace for Veterans or Iraqis 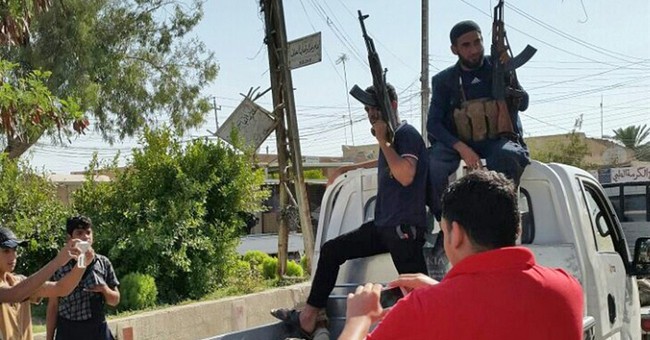 They have healed also the hurt of the daughter of my people slightly, saying, Peace, peace; when there is no peace. -- Jeremiah 6:14

Gentlemen may cry peace, peace—but there is no peace. The war is actually begun! The next gale that sweeps the north will bring to our ears the clash of resounding arms! Our brethren are already in the field! Why stand we here idle? What is it that gentlemen wish? What would they have? Is life so dear, or peace so sweet, as to be purchased at the price of chains and slavery? Forbid it, Almighty God! -- Patrick Henry

Well, I for one am glad that the prince of peace ended that whole pesky Iraq War that he inherited from his predecessor. I’m reminded of how grateful I am as the United States, here at Veterans Day, just shortly after the Marine Corps birthday, authorized another 1,500 troops to go fight in a war that is been over ever since the Nobel Prize was awarded to our own master of the universe, Barack H. Obama.

“A team of about 50 military personnel are visiting a U.S. military airbase in Iraq’s Anbar province,” writes FoxNews, “after President Obama authorized the deployment of up to 1,500 more American troops to bolster Iraqi forces in the region in the fight against the Islamic State.”

I can’t imagine anything more gratifying to veteran troops than having to go back and secure a country than was once secured by them at great cost to their friends, to their psyche, to their armed strength.

The fight for Anbar province today is reminiscent of the fight for Al Anbar in 2003-2007. America eventually prevailed, but the fight cost the U.S. 9,500 casualties before the troop surge, a change in tactics to engage the enemy from longer distances and old-fashioned, American one-hundred dollar bills turned the calculus of victory to our side.

The most important part of the equation was an American commitment to a population that would have to live with the results of our mercurial political system, and our electorate.

As one former Ramadi Marine veteran reminded me, it wasn’t until Iraqis actually believed that the United States would stay to protect them that we fully secured the goodwill of the citizens we where there to protect.

And of course then we left on the flimsiest excuse: Obama wanted to be president of the United States and he did so by screwing over a whole bunch of countries. While American citizens can feel justifiable remorse over the most incompetent administration in U.S. history, no people were left worse off than the Iraqis by Obama’s election.

Obama will present the thin fig leaf excuse that the Iraqis didn’t want the U.S. there. But like the God of the Old Testament, we know the naked truth underneath the leaf.

And yes, there is shame in it. For we all know that Adam is naked underneath.

Obama sinned, he erred, he cut and ran, leaving Muslims, a group he says he cares about, worse off than they were before.

But then why should Iraqis be any different than African-Americans, or Hispanics or the elderly, or children, or women or the other foils to Obama’s superiority?

History is littered with people Obama “cared” about that he left worse off.

Yesterday was Veterans Day; the day before was the Marine Corps birthday.

The Marines bore a heavy load of the fighting in Al Anbar. But even more they served as ambassadors for the magnificence of the American spirit, the generosity of our aims and our hopes for Iraqis future.

I wasn’t through force of arms that these Marines conquered. It’s never how America wins.

“The only hope for the future [the Iraqis] could see was to be found in what members of [Marine Expeditionary Force] had done and were doing on their behalf,” writes Major General John F Kelly of what he calls the Anbar Awakening, “despite the heat, the criticism from home, and the killing and casualties. They began to see us as a force that was sharing in their agony. Once they tried reaching out to some soldier or Marine’s outstretched hand in friendship, it was over.”

And once we withdrew that hand it was over and over again.

This time when we extend it, let’s do it permanently.

We owe it to ourselves, to the Iraqis, and to our veterans who shared the agony of the Iraqis as brothers and as men.