In 'Crazy" Cruz versus McClique, I'm with Cruz 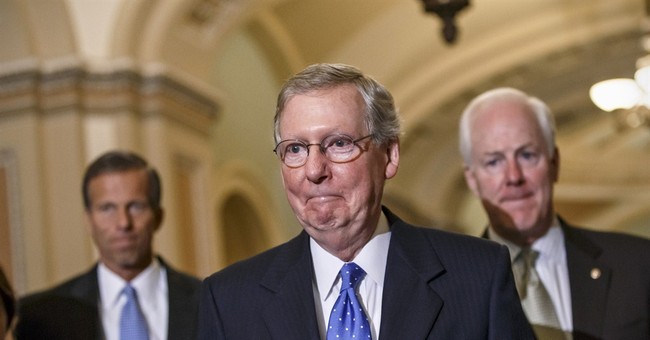 While many people will attack GOP leaders in the Senate for not understanding what Sen. Ted Cruz is doing, don’t count me as one of them. You see GOP leadership has been handicapped for quite some time now.

Mark Twain, who witnessed the impeachment debacle of Andrew Johnson in the House of Representatives in 1868, pegged it: “[I] was reporter in a legislature two sessions and the same in Congress one session,” Twain wrote, “and thus learned to know personally three sample bodies of the smallest minds and the selfishest souls and the cowardliest hearts that God makes.”

You must understand that it’s very difficult for politicians to recognize another politician, as in the case of Sen. Cruz, who is actually doing the things he campaigned on, like getting rid of Obamacare.

Cruz, in this case, is an oddball to his Senate colleagues.

Keeping promises is a novel concept that many politicians have difficulty accepting at face value.

They fall back on the liberal trick of pretending someone is just too stupid to know any better.

Yes, they have all said they want to get rid of Obamacare, at least if they’re Republican.

They campaigned on getting rid of Obamacare, they fundraised on it, went to barbecues and got applause for condemning Obamacare.

But that doesn’t mean they actually want to DO something about getting rid of Obamacare.

But these Republicans didn’t go to the trouble of stump speeches and barbecues and town halls and meet-and-greets and press conferences and get-out-the-vote to go to Congress to get things done.

They went to Congress so that they could get to go back to Congress, again and again, and again.

And in that process of going to Congress again and again and again, politicians from both parties often become so acclimated by the exigencies of campaigning that I sometimes wonder if there’s actually a human inside the mechanism anymore-- if their soul doesn’t eventually shrink away or just hide in a corner, like in the further recesses of the appendix.

Years of constant battle with the press, with the opposition, and with their too-young staffers to avoid saying anything that might result in a “gotcha” moment has to eventually affect the thinking of even the most narcissistic people.

And right on cue, politicians are the most narcissistic people.

They have to be.

Otherwise they would not be able to live with themselves.

Even more, they know they don’t keep promises. They’re OK with that.

After all: Don’t you know how important these people are?

And only a real narcissist can live with logic like that. The higher you go on the politics totem, the tighter the logic gets.

Sen. John McCain’s head is so big, for example, that he thinks his head keeps the Capitol dome from falling in on itself.

For the folks in DC -- especially in the GOP-- the whole idea of keeping promises and getting things done is too radical, too revolutionary.

And that’s why this may be the last hurrah for the old GOP.

Increasingly, I suspect that most Republican politicians, as least the ones in Congress, want Obamacare implemented. You don’t fundraise as effectively when you defeat Obamacare.

You fundraise effectively on the latest Obamacare outrage.

So Sens. Mitch McConnell and John McCain and the rest of the McClique up in DC have arranged a compromise.

Obamacare stays intact, the spending goes on unabated and the fundraising for 2014 will continue for the GOP.

The GOP leaders call this peace.

But peace was never a choice.

“You were given the choice between war and dishonor,” Winston Churchill chided GOP wannabe Neville Chamberlain on the eve of the world war; a war that was largely crafted on a series of compromises by Chamberlain ala McClique.

“You chose dishonor, and you will have war,” thundered Churchill.

Sadly, here too, war it will be, eventually.