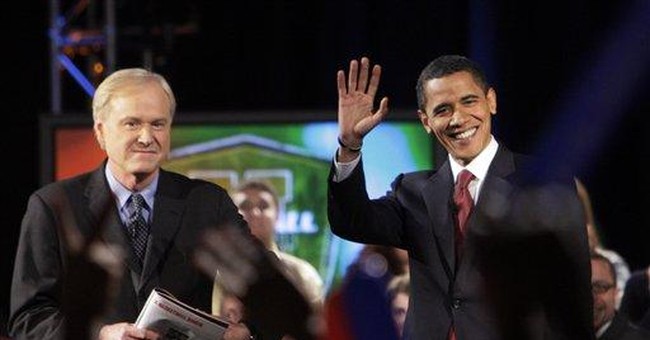 A suspect-who-shall-not-be-named-a-suspect is not now in custody.

The non-suspect is just sitting around a hospital, or some other undisclosed location, under heavy guard, being fully cooperative with law enforcement officials, who paid testament to his cooperation by raiding his apartment and taking away bags of material.

But newspapers with strong ties either to the Least coast or the Left coast want to emphasize to you that there are NO SUSPECTS in “custody.”

There is only a Saudi national with his favored visa status, who is fully cooperative, and not in any way a suspect. The bystander who tackled the suspect-who-shall-not-be-named-a-suspect and detained him for police was just really happy to see him running away from the scene of the crime and being fully cooperative.

This is a normal level of cooperation for foreign student visa holders who somehow escape a mass casualty bombing with their life.

The media, taking their cues from the president, who can’t even utter the words Saudi and terror in the same paragraph yet alone the same sentence, is waterboarding the English language to avoid the simplest but most embarrassing explanation for the administration.

That  explanation is that Islamist terrorists are the most likely suspects, especially those with ties to Saudi Arabia.

Why is it so embarrassing?

Who the heck knows anymore? It’s like the Saudi’s have naked pictures of Obama molesting sheep.  Don’t they know that that would just make him more popular with the Democrats?

Instead, we are told the Boston bombing is likely a “homegrown” incident of terrorism, according to analysts from the alphabet soup of left-wing media- called ABC-NBC-CBS-PBS-NPR-AP-NYT-WASHPO-LAT by my friend Shawn Mitchell. It’s likely terrorism perpetrated by white Americans- is there really any other kind?- because the day in Boston on which the bombing happened is named Patriots Day, we been told knowingly.

And we all know how evil “patriots” are.

Oh, and it was tax day too.

Did I tell you patriots are evil? Good.

Because, patriots have a long history of “hating” taxes.

I know, I know. Can you believe it? You didn’t understand that patriots could be so evil as to hate taxes.

Meantime police are looking for a man who was described as dark-skinned and who was wearing a backpack in the vicinity just minutes before the explosions.

“Investigators say they are looking for a ‘darker-skinned or black male’ and a yellow van in relation to the double blast that killed three people in Boston, Massachusetts yesterday,” reports IBTimes UK.  The IBTimes edition comes from the safety of the United Kingdom, far from the madness of ABC-NBC-CBS-PBS-NPR-AP-NYT-WASHPO-LA media assassins. “The suspect, who is said to possibly have a foreign accent,” reports the UK outlet, “was seen trying to enter a restricted area wearing a black backpack and black sweatshirt five minutes before the first explosion.”

What racists! A yellow van?

What does the color of the van and backpack have to do with this?

We all know, thanks to ABC-NBC-CBS-PBS-NPR-AP-NYT-WASHPO-LA, that the bombing must be the work of right-wing extremists with ties to radical, white-privilege organizations like the Boy Scouts, 4-H, the Catholic Church or radical charter school moms.

White, you see, being the absence of color, is truly evil, as we have all heard from famous white guys like ALGORE, Chris Matthews and Colin Powell.

White people, as you know, HATE paying taxes. They are the only ones who hate paying taxes though. Everyone else is a “non-patriot” who just loves paying taxes.

“Would you, as an expert, be thinking domestic [terrorism] at this point?” asked Chris Matthews based on his tax-day-mad-patriot-bomber theory. “I don’t think Tax Day means a lot to the Arab world or Islamic world or Al-Qaeda in terms of their world. It doesn’t have iconic significance,” he continued dismissing Al Qaeda, the most prolific bombers in the world, as insignificant.

So you can understand, just like Matthews does, that in putting together all the facts that we know, like the suspect-who-shall-not-be-named-a-suspect, his raided apartment-that-shall-not-be-named-his-apartment, the yellow van, the black backpack, the person of interest wearing a hoodie, who is “dark skinned,” the non-fly zone over Boston ala 9/11, why naturally you could come to the conclusion of the blended talk analysis- better known as psycho-analysis- and come to the only reasonable story:

Some white guy with a Budweiser cap and a John Deere belt buckle is responsible for the explosions in Boston.

Here’s an idea we should all try: Who cares about the who-dunnit theories or cultural sensitivities of anyone whether they call themselves patriots or martyrs?

Gather the facts and just get ‘em.

Biden's Polling Is So Bad One Democrat Running for Office Doesn't Want Him Anywhere Near His State
Leah Barkoukis
Pentagon Puts 'Up to 8,500' Troops on 'Heightened Alert' Over Russia Fears
Spencer Brown
Not That We're Shocked, But the CDC Just Hurled More Propaganda About Masks Again
Matt Vespa
Liberal Writer: 'I'm Done' With COVID Restrictions, And What We're Doing to Children is a 'Moral Crime'