Lady Liberty Is No Fool

John P. Warren
|
Posted: Feb 02, 2017 11:27 AM
Share   Tweet
The opinions expressed by columnists are their own and do not necessarily represent the views of Townhall.com. 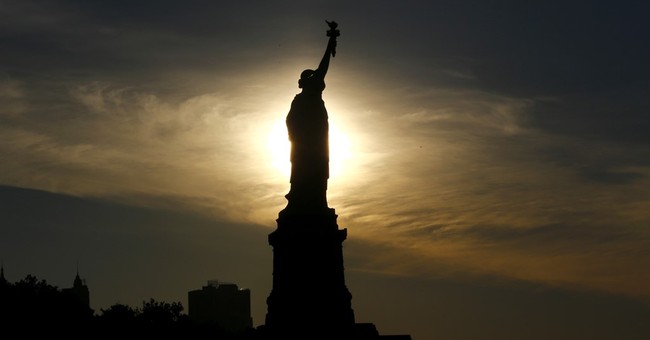 Progressives badger us every minute with the line that we are a nation of immigrants. In their narrative, our ancestors all poured into this blessed land, willy-nilly, over the last two centuries, and that fake fact continues to justify the ongoing carelessness about our borders. Worse, they require the rest of us to live with the growing insecurity that comes when every door and window in our national home remains open for things, persons, or diseases to sneak or creep beside us.

There was little mention of Emma Lazarus’s haunting imagery on behalf of the tired and poor as Lady Liberty lifted her lamp “beside the golden door” when President Obama turned away Cubans fleeing Castro’s oppression “yearning to breathe free;” when FDR refused “huddle masses” of Jewish refugees, the “wretched refuse” of Nazi shores; when nearly a quarter million immigrants, “tempest-tost,” were sent home from Ellis Island. Where were the noisy protesters, the legions of lawyers then?

Those who remember our revolutionary history will recall that nearly everyone calling themselves “American” came here from somewhere else. In the first hundred years of the American experiment, our borders were movable, expanding, and at times, sketchy at best.

After the gross expenditure of blood and treasure that defined our Civil War, we began to take seriously what it meant to be an American, and that definition encompassed our borders, and determined who had citizenship rights, and who didn’t. It was an imperfect undertaking, to be certain.

As industrialization beckoned workers from abroad, institutions like Ellis Island became part of their journey. New York harbor’s little dot of U.S. soil was just one of many ports of entry for immigrants—San Francisco, Detroit, Buffalo, and others along our southern borders served the same purpose—but Ellis Island is the icon for all the rest. Over its 60-year history, 1892-1954, some twelve million people from all across the British Isles and the European and African continents sailed to our shores—Christians, Muslims, Jews, and non-believers—and all lifted their eyes to the fabled lady who greeted them.

Coming here was risky, indeed. All sorts of calamities befell the sojourners, not the least of which were the immigration inspectors scrutinizing all 3rd Class passengers. A Harper’s Weekly piece from August 26, 1893, sought to assure its readers that not just anyone could come ashore:

“For (the voyager) the New World speedily becomes a mighty interrogation point. Failure to answer properly any one of a score of questions asked him perhaps half a score of times and by as many different men, failure even to ally suspicion by his manner, though his words are satisfactory, may cost him vexatious delay, or the shame and bitterness of wrecked ambition.”

Liberty was a Lady, but no fool was she. The lame and the sick were marked with chalk and held for further examination while others received a quick scan of their face and hands. About 20% were detained. Those deemed to be anarchists or insane didn’t make the cut. All of those ultimately rejected were sent home on the next ship. In that period—from Ellis Island alone—about 2% were judged unfit to become citizens of the United States. About a quarter million were denied their dream and turned away.

It has always been understood that while we may well be a nation of immigrants, our ancestors were the chosen many. Just as those who rent or own their homes have the right to decide who enters their abode and when, our national family had and has that right, no less sovereign than that claimed by every New York tenement dweller, every trailer house denizen, every rancher, every tract home resident.

That we have been welcoming cannot be argued, but we’ve been careful at the same time. By the 1920s, the government established quotas based on nationality and skill, and no one thought it unjust. No one felt guilty because they were here and others weren’t. Quotas may have been discriminatory, sometimes in all the wrong ways, but it was in the exercise of our sovereignty that they were made. Lady Liberty’s lamp had an on and off switch, it turns out, but it didn’t stop the migration of many millions more since 1954, when Ellis Island closed.

The latest imbroglio over persons arriving from countries designated by President Obama as state sponsors of terror is mystifying, inasmuch as they represent only seven of the 46-51 countries considered majority-Muslim. Despite all the recent noise, we as a country could not have been too forbidding of Muslims since they now represent 1.5% or our population, or 3.2 million people. So, it isn’t about religion, is it?

It’s becoming harder and harder to listen to pious progressives decry us as anti-immigrant, to hear senior church eminences speak so sweetly about sanctuary, when sanctuary is about persecuted innocents. Exercising our first responsibility to each other—to protect ourselves and our national identity—is nothing about which to be ashamed.

Call me whatever names you wish, but call me American first. Persons wanting to enter our national home from countries sworn to wipe us and our allies off the map should expect Lady Liberty to give them the eye and not a wink. If protesters wish to house, clothe, and feed the teeming masses they sponsor, let them volunteer. If they or their new wards wish to exchange our rights under the Constitution for Sharia Law, let them enjoy the blessings of Libya—over there.

The Salvation Army Has Gone Woke Too Now, and They're Losing Support
Rebecca Downs
Florida Reports Lowest Daily COVID Cases Per Capita in the Country as Lockdown States See Rise in Infections
Landon Mion
Rep. Boebert Apologizes to Muslim Community for Recent Comments About Rep. Omar
Landon Mion
(Xi) Did You See What the Latest Wuhan Coronavirus Variant Was Supposed to Be Called?
Katie Pavlich
The Most Privileged Response on Crime Just May Come from Seth Rogen
Rebecca Downs
New Poll Shows A Majority of Voters Blame Biden and Congress for Supply Chain Issues
Madeline Leesman

ICYMI: Another 'Indigenous' Person Was Exposed As a Total Fraud
Townhall
Governor of Mass. was against travel restrictions before he was for them
Twitchy
Dance With the Guy Who Brung Ya: Democrat Freak-out Begins Over 2022
Redstate
Whose Land Did Native Americans Steal Before Europeans Stole It From Them?
PJ Media