Questions Nobody Has Asked

John P. Warren
|
Posted: Feb 21, 2016 10:00 AM
Share   Tweet
The opinions expressed by columnists are their own and do not necessarily represent the views of Townhall.com. 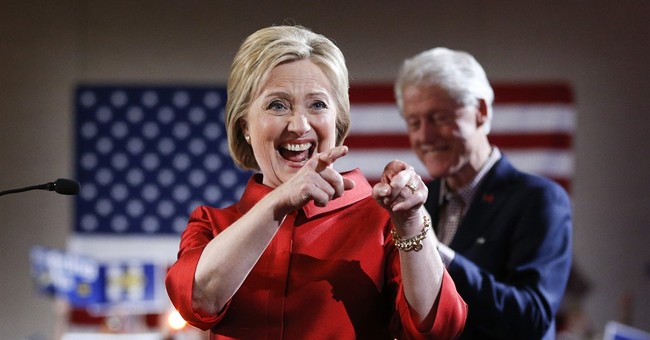 Watching CNN’s debates and town halls makes me think of questions I’d like to ask. You, too, I’m sure. Here are a few no one seems to be asking.

About Clinton: Despite her Nevada win, it is becoming harder and harder for people to believe she and her husband went through all the trouble and expense to keep their emails on a personal server for the sake of convenience. While the inquiry thus far has focused solely on those classified emails, the better question is what was it the Clintons did NOT want to have on government servers, so easily accessible to law enforcement? Is it possible they did not want email exchanges concerning Clinton Global Initiative conflicts or foreign party payoffs to appear there?

Let’s hope the FBI and State are asking that question. Next, if Nixon’s 18 minutes of missing tape warranted a special prosecutor, wouldn’t Mrs. Clinton’s deceit about her emails—obstructing justice?—and reckless misuse of classified information warrant a special prosecutor?

About Trump: He’s won South Carolina, and that’s impressive. The most important insight is that evangelicals aren’t interested in a “Christian-in-Chief,” but someone who will fight for them. A few valid questions remain, however.

Is his campaign truly a freebie? When Nelson Rockefeller ran for president, the media bellowed he was attempting to buy the office. Quietly, the media reported that old Joe Kennedy did the same for his son. Now, when Mr. Trump repeatedly reminds us that he is self-funded, isn’t he buying the office?

People who love freebies—and who doesn’t?—often do not ask the next question. If Mr. Trump succeeds in gaining the office without anyone’s financial support—from the waitresses, schoolteachers, and garage mechanics—will he owe the voters anything?

Next: What does Mr. Trump really believe about immigration, abortion, and yes, the Iraq war? We’ve had plenty of examples how he was okay with illegal immigration before it became politic to build a wall. We know how he was for Planned Parenthood and unlimited abortion before it became convenient to be lukewarm about PP and now, pro-Life. Sure, he may fight for us, but what will he fight for?

For the past week, we’ve been bombarded with his canards about GWB and the Iraq war and how he had been steadfastly against it, but now there’s a September 2002 audio during which he says he’s in support of a war in Iraq, wishing only that it had been done right the first time.

Now we know that what Mr. Trump believed earlier is the opposite of what he believes today. The real question is what will he believe tomorrow? We do expect thinking adults to change their minds. But on everything?

About Sanders: By all accounts, Mr. Sanders did not collect a paycheck until he was 40 years of age. After decades of organizing and making noise from the sidelines, he served several apparently unremarkable terms as mayor of Burlington, Vermont, and several terms as a congressman from that state. Despite his do-nothing career in the lower house, he managed to elevate himself to the Senate in the 2006 election, where he also did nothing. I recite all of this only to point out that Mr. Sanders has never held a private sector job, and has never owned or operated a business of any kind. So, when he says he will create “millions of jobs” for unemployed black youths and others, why does no one ask how he will do this and what kind of jobs these will be?

Many Americans did not take Barack Obama at his word when he said he would “fundamentally change” our country. They just thought it was cool to have a black man as president. We are now poorer, weaker, and more divided than ever. So when someone like Bernie Sanders talks about a “political revolution,” we darn well ought to believe he will turn the country upside down if he gets a chance.

To me, that means “democratic” socialism—the only thing democratic about it is they con people into voting them into office at least once. Yet, people like Mr. Sanders have no idea how to run anything. The jobs he says he will create will be floor sweeper government jobs designed to forever keep those black kids and everybody else dependent on Uncle Bernie and friends.

Another thing nobody thinks to ask Mr. Sanders (and his echo, Mrs. Clinton) has to do with their promise of “free public education.” Let’s think this through for a moment. These two thimble-riggers will tax the daylights out of everybody to erase current educational debt and provide a big new freebie to the masses. How nice for public institutions. Sure, the private schools like Harvard with its multi-billions in endowment may survive for a generation or two, but early in the first decade after implementation of this freebie, private colleges and universities, religious-based or not, will begin to disappear forever.

Just as Catholic parochial schools are having a hard time with enrollment because middle class wages have been stagnant, those same newly taxed families will not shell out a dime to send a kid to Notre Dame, Grove City College, Liberty, Wheaton, or Brown. Why would they? Many consequences of that catastrophe are beyond imagination, but one consequence is not: the federal government will own and control every school, every teacher, and every textbook in the nation.

About Us: Sure, we’re angry and with good reason, and people with sense will not vote for Clinton or Sanders under any circumstances. The questions we must ask Messrs. Trump, Rubio, and Cruz —and their answers—will determine whether we keep 240 years of liberty, or because of blind anger, vote it away.