Another Time For Choosing 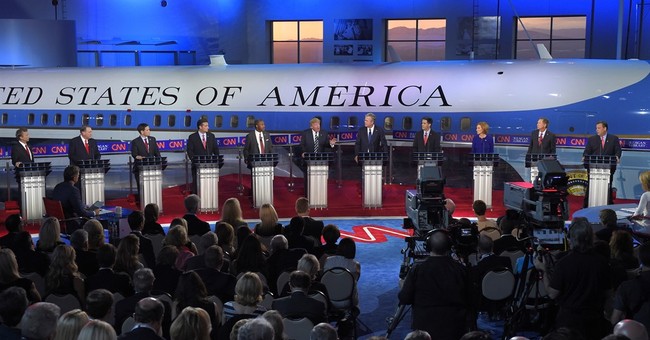 Every generation faces new, hard choices, and Americans understand the paradigm well. From the terrors of our birth in 1776, to the family-renting horrors of the Civil War, to Teddy Roosevelt’s first forays as a Pacific power, to our shedding of blood on European soil in the World Wars, to leadership in the nuclear age, we claimed our place as the exceptional nation we are.

Now, we are in the midst of what might be called the New Age of Terror, one in which all the old rules of diplomatic and military engagement are no more. The Pax Americana is over, hard won though it had been at the cost of thousands of lives and at least a trillion dollars in large and small arenas over the past hundred years. We face new rules and new non-rules, organized chaos in much of the Middle East, smoldering mounds of tinder in Africa, and crackling demographic changes all across Europe. Except for revolutionary prone parts of South America and the marginally controlled bellicosity of North Korea, much of the planet’s unrest has to do with ISIS/ISIL’s expansion of its irreligious brutalities.

To meet these international challenges, along with the numerous domestic issues confronting us—immigration and sanctuary cities chief amongst them —our two political parties are putting forward their purported best to lead us through the difficult choices ahead.

All day today, Hillary Clinton attempted to explain and defend why she refused to upgrade security in Benghazi even though many of our allies and NGOs were departing in haste because of the rising danger there. Instead, she praised the local embassy staff for taking advantage of “fire sale” prices in securing certain material from those leaving. We heard how Mr. Blumenthal not only had great access to her via her personal email account, that he had sufficient cache to require DOS staff to have Ambassador Stevens comment on his advice to Mrs. Clinton, but that Stevens himself did not have direct access via her email to Secretary Clinton.

Worse, within a few hours of the attack, Mrs. Clinton emailed her family, and later the president of Libya and the Egyptian prime minister, that what happened in Benghazi was, in essence, a terrorist attack. She made no mention of a protest of a video gone bad. Yet, a few days after September 11, 2012, at Andrews AFB, with the ghosts of Stevens, Smith, Doherty, and Woods present and listening in, she persisted in telling the nation another story altogether untrue. That spun-up tale was a most convenient downplay of the terror that had occurred less than 60 days before the presidential election. Remember the mantra: “GM is alive, bin Laden is dead, and al Qaeda is on the run!” Nothing could be allowed to undercut that strategy.

Then, she allowed her Ambassador to the United Nations, Susan Rice, to go on five news shows a few days later and serially repeat the lie. Whether Ms. Rice willingly sacrificed her reputation on the Obama-Clinton altar we will never know.

Two other observations about today’s hearing apply: It became clear that in addition to deceiving President Obama about her use of a private email server and the status of Mr. Blumenthal in policy-making for his administration, Mrs. Clinton clearly violated at least one of the recommendations of the Accountability Review Board held in 1998 during her husband’s administration, to whit: the Secretary of State must take a personal interest in security matters for diplomatic missions in dangerous locations.

Several commentators have climbed on the band wagon suggesting that Mrs. Clinton looked presidential, and that she masterfully fielded the many probing questions over several hours. These folks seem to have forgotten that she has had just over three years now to practice her deniability and false presentations on this issue. In fact, it’s been said she’s spent the past six days behind closed doors boning up for this appearance, much like a presidential debate. After all that, she darn well ought to have appeared in command of a carefully spun narrative! This was very unlike an earlier, less scripted appearance when the real HRC responded in anger: “Just what difference does it make, anyway?” To the ghosts of Stevens, Smith, Doherty, and Woods—and to all of us—her actions could have made a difference.

So, Mrs. Clinton is the candidate from the party of Wilson, FDR, Truman, JFK, Johnson, and yes, Bill Clinton? Is she the one to help us thread the nasty tangle of international and domestic problems facing America when she cannot successfully untangle the strands of her own falsehoods?

As far as the Republican Party is concerned, it is just beginning to shape itself, and it is far too early to endorse one or more prospects for the daunting tasks ahead. That Paul Ryan may become House Speaker is a good start, but he is only one part of the solution. That woman or man who leads the party into electoral battle will need to spread conservative values to a nation recently taught to lean left on any windy day. It is not that any of us should do with less, but how can we work together so that those willing to work for them can reach their dreams.

Ronald Reagan would consider 2016 another time for choosing, I believe, and turning to a candidate with a long trail of shady, self-serving, and deceptive conduct in the nation’s business is not a choice he—or we—would ever want to make.