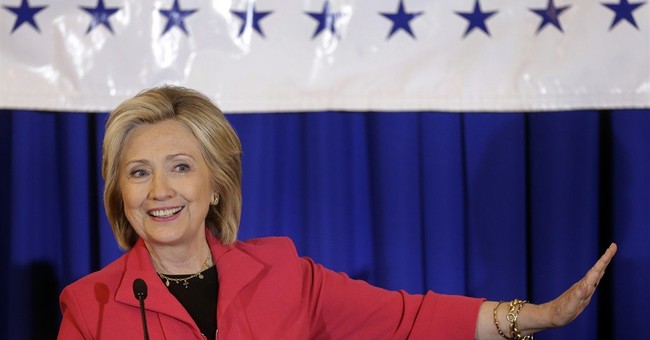 On other occasions, I’ve written about Mrs. Clinton’s startling lack of inevitability, despite all professional prognostications to the contrary. Last week’s desperation attempt at populism, and her weekend re-launch in the cloisters of Roosevelt Island are more recent signs that her candidacy should begin to shrivel by Thanksgiving.

Polls have begun to bear out what much of the public has known for some time: HRC is the self-selected standard bearer of a still powerful political brand in the U.S., but there is little else besides an abundance of entitlement superimposed over a notable lack of accomplishment. The gloss of titles like First Lady, Senator, and Secretary of State have hardly disguised, for many of us, the long train of sleaze and self-dealing. Not to be deterred, HRC has pressed on in the vain hope that as the first woman to be considered seriously as a major party nominee, a new title, POTUS, will be added to her gallery.

Daily, she is touted by State Media and her low-information fans. “It’s about time we had a woman president,” has become code for Hillary and only Hillary. After all, haven’t we noticed, that for progressives, you aren’t truly a woman unless you’re a professing liberal Democrat? Interestingly, the same media mavens who suffer amnesia over HRC’s unbroken chain of dishonesty over the past ten years now salivate supreme over Marco Rubio’s parking tickets.

And what are HRC’s big ideas? Side-by-side with Lincoln Chafee’s cry for the metric system, HRC decries racism and class warfare she says is part of voting systems “from one end of the country to the other.” She calls for universal, automatic voter registration for everyone 18 and older, ignoring the likelihood that many millions refuse to vote because she claims to embody a party that no longer represents them.

Supposing that demagoguery will get her anything, the Roosevelt Island performance revealed an ornamental socialism pandering to everyone breathing. Her call for free universal pre-Kindergarten education, for example, would be laughable if there weren’t so much to cry about. Would the value of that free “education” be equivalent to the free public education our under-performing children now endure? Would she call for an end to the political correctness strangling thought and speech in our schools? Would HRC require everyone to finish high school, insisting on a literacy level second to none? While the answers may be apparent to most sentient beings, this would not a time to hold one’s breath waiting for HRC to step up.

Free stuff for the base and packing the voting booths are two themes that mask the real questions. What is the point of universal registration for a semi-illiterate populace, one might ask, when liberals oppose sensible verification of information accuracy, or any kind of elementary cross-checking to safeguard election integrity? For that matter, what is the point of adding millions more to the polling lists if their votes can be stolen in an invisible instant, as Virginia learned this past April how any hacker—influenced by a foreign or domestic power—could steal enough votes to change an election’s outcome? Is HRC afraid of an honest vote?

Just as our education system has not been held accountable, neither have our voting practices. Many do not insist that the best teachers teach, and that the worst be kept from our children. Many do not care if qualified citizens vote, and race results are almost never audited. Will we continue to lag behind others in literacy? Does anyone seriously think election theft will not happen in 2016?

A savvy female character in my novels on the subject of election theft, Turnover, and TurnAround, says: “We are all victims of little tyrannies—but we don’t have to be.” HRC embodies one level of integrity in this election cycle. Must the rest of us be held down to that same level?