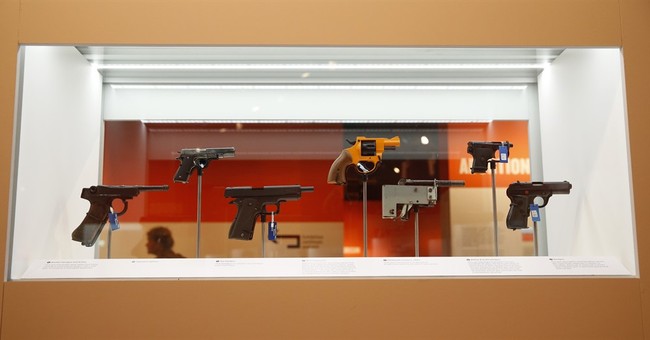 Before the smell of gun powder wafted away on the crisp Oregon breeze, President Obama scrambled to the podium to demonize an inanimate object, a tool. Obama is doctrinaire and, therefore, painfully predictable. The same self-loathing, political and social relativism that paralyzes him in the exercise of foreign policy, prevents Obama from dealing with domestic acts of violence in an effective or logical manner. All progressives are fundamentally pacifist because they believe in a moral relativism that eschews personal responsibility, denies the possibility of American exceptionalism, and even the existence of evil. They substitute pathology for culpability and, thereby, excuse every pet sin. People aren’t responsible, they are at worst, sick. Chris Harper-Mercer wasn’t a sick man. He was evil and met the end to which his evil fated him. Eventually, a good man with a gun confronted an evil man with a gun. In this case, the evil man shot himself and stilled the odious beating of his shriveled heart.

Obama seems to think that creating “sensible” laws will in some magical way, eradicate the evil that resides in the heart of man and eliminate the scourge of hate and violence. Like a child, Obama thinks that the tool is imbued with a supernatural evil that instigates and impels the loathsome murderer, that apart from it he would not exercise his homicidal impulse and that the plans of the diabolical would be foiled. His assumptions on both counts are patently, laughably false. Legislation will never prevent those who harbor the worst sentiments conceivable from completing their barbaric deeds. What lunacy must Obama harbor to think that someone bent upon murder will hesitate to break the law regarding a relative trifle—the possession of an “illegal” firearm? Hasn’t the war on drugs been a resounding success? By Obama’s logic, the manufacture, sale, and use of illegal drugs should have ceased decades ago. Unfortunately, reality is far different than the cartoonish musings resident in the otherwise vacuous skull of our current president.

What is also lost on liberals is the simple fact that there was a time, in the long forgotten past, when firearms did not exist. Even in these idyllic days of yore, people found innumerable, and creative ways to commit murder and mayhem. People beat their plowshares into swords and busied themselves with hacking, stabbing, and bludgeoning each other to death. It’s simply part of the human condition. Does Obama’s hubris presume to change the nature of man? Truly, a god-like aspiration. Sharp metal is still a huge fan favorite among the homicidal. Today, knives and even bare hands are used more often to commit murder than is the much maligned “assault rifle.”

Ending school shootings isn’t complicated but it’s hard. It’s going to take real guts. But, aren’t our kids worth it? Democrats like Obama aren’t concerned about real solutions, they only want to appear concerned and determined. Obama’s chicanery is apparent by his flippant reliance on the same liberal contrivance, a harangue on legislative actions that will presumably prevent “mass shootings” by burying any would-be homicidal maniac under the crushing weight of governmental disapproval.

When has hate ever bowed to legislative pronouncements?

Recently, Dr. Ben Carson made a statement controversial only to the liberal aristocracy who have the luxury of subbing out their manhood to dignitary protection professionals, who ply their manly trade bristling with guns and other accouterments of personal combat. Dr. Carson had the temerity to suggest that he would do the manly thing and fight back if confronted by an armed assailant. He said, “I would not just stand there and let him shoot me.” What an outrageous profundity! Most liberals never learned this on the playground. Curling up in the fetal position in the face of a pugilistic bully only gets you beaten harder and more often. A sheepish acquiescence in the face of a mortal threat usually gets you dead. Many on the left have criticized Dr. Carson, suggesting that such an opinion is demeaning to the victims of the UCC shooting. However, this is merely a fig leaf and a vain attempt at a hollow bravado. In fact, Dr. Carson’s statement is a challenge to rise to the distinction of a lost virility; furthermore, it is an echo of the theory of personal combat devised and communicated artfully by the late Colonel Jeff Cooper, the “guru” of principles of personal defense and of the theory of the pistol. Colonel Cooper thunders from the grave:

“The only honorable response to violence is counter-violence. To surrender to extortion is a greater sin than extortion, in that it breeds and feeds the very act it seeks to avoid.”

“Fifty years ago young people were made to understand—around the dinner table—that strife was part of life, and that they might well encounter it, and that it would then be their duty to face it without blinking—ready, willing, and able to use force quickly and expertly if necessary. Boys were taught to shoot and use their hands, and girls were taught to expect that in their men.”

Colonel Cooper’s words are distilled from direct experience with deadly realities and represent an ethos derived from a life of action, accomplishment, and rugged daring. HIs book, To Ride, Shoot Straight, And Speak The Truth is a classic of practical wisdom regarding the mechanism of human nature and the particular component that most often asserts itself when unrestrained by Divine truth. Within the vortex of personal combat, the unflinching application of justifiable deadly force is often the arbiter between the quick and the dead.

Obama would have you believe that the gun is the enemy. The truth is that the gun is your savior when, God forbid, you meet with the true enemy—a man twisted by a liberal and godless ethos that has taught him to hate; who sees life as the mere plaything of chaos and subject to the whimsy of power.