Where Is The Shining City Upon A Hill? 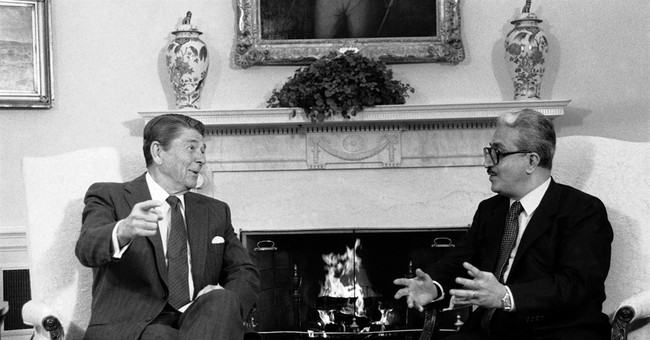 By degrees, we are losing the shining city upon a hill. All that glittered golden in the warm light of Liberty is tarnished in the dank and humid fog expelled by a ubiquitous bureaucracy and an army of apparatchiks. What once shone with the brilliance of limitless opportunity, enterprise, and self determination is now dull with corrosion wrought by a bolshevik class envy, a manufactured racial discord, and a dehumanizing dependance on the dole. The beacon of freedom seems to cast a paltry glow where thickly gathers smoky clouds of doom, summoned by prophets preaching withdrawal, capitulation, and resignation. In the swirling shadows, race-hustlers and demagogues scuttle, crab-like, on the shores where once yearning masses gathered to participate in free enterprise and assimilate with the culture of profit, plenty, and piety. But, as of old, democrats clatter eagerly on their foul claws to erode the Republic’s span to Liberty’s shore.

Ronald Reagan was fond of describing America as “a shining city upon a hill,” a phrase originally made part of political discourse by John Winthrop, a leading Puritan figure in the founding of the Massachusetts Bay Colony who, in his sermon, A Model of Christian Charity, envisioned the colony “as a city upon a hill,” watched by the world. Winthrop’s phrase was, in turn, an homage to Christ’s description of Christian living, which should serve as a beacon of truth in a world shrouded in the darkness of original sin. (see Matt. 5:14) During his lifetime, Ronald Reagan exemplified the qualities of rugged individualism and self determination that were traditional hallmarks of the American experience. He believed in the inherent nobility of our constitutional republic and in the rightness and goodness of our influence among the ancient capitals of the world. Even in death, Reagan’s legacy burns as a smoldering coal, birthing Liberty’s sacred flame in those who draw close.

Recently, I visited the Ronald Reagan Presidential Library, located in Simi Valley, California. It’s situated on a rise among the spartan beauty of desert hills, rolling toward an infinite horizon like a roiled sea made of sand, stone, and scrub brush. Wide swaths of green front a colonnade, accented by flowering bushes and manicured trees. But, for all the natural beauty, the real treasures are the artifacts which lie inside, memorials to a significant life lived artfully, passionately, and with aplomb. The library houses a huge variety of things—some are intimate like the love letters written to Nancy, or the new suit that President Reagan wore the day he was shot by the left-wing psychotic John Hinkley Junior. There is a room stocked full of equipment and tack used by Ronald and Nancy Reagan on their ranch—things that naturally accumulate around a self-possessed man and woman, acquainted with adventure and imbued with indomitable vitality. Beautifully accoutered saddles are on display alongside utilitarian rigs within a large plexiglass cube. Below, a large collection of belt buckles jewel the perimeter of the saddle case. Not surprisingly, a specially commissioned Smith & Wesson .44 magnum revolver is displayed proudly, engraved with President Reagan’s signature and images from his life and presidency. The gun was a gift from Leopold J. Deters, president of Smith & Wesson. Much of a person’s character can be divined from examining what one does with leisure time. Reagan spent his free hours in robust pursuits, on his ranch, doing rugged things. It is a testament to a boldness of spirit and to a fondness for work and a self assuredness in a challenging environment.

The library also houses the Boeing 707 that served as Air Force One for President Reagan. Also, Marine One is on display and the presidential limousine, accompanied by one of the Secret Service vehicles used in the motorcade. Photographs and films record for posterity the magnitude of the threat posed by the Soviet Union, the “Evil Empire,” and by its satellite states. Reagan’s diplomatic posture is stated succinctly on a display placard:

“We had to bargain with the Russians from strength not weakness. If you were going to approach the Russians with a dove of peace in one hand, you had to have a sword in the other.”

Reagan drove the Soviet Union to extinction, prodded by the razor’s edge of his Star Wars Defense Initiative (SDI). From a position of power, Reagan collapsed the Evil Empire under the weight of America’s titanic economic engine; he literally slew the Soviet bear with the unbounded dynamism of free enterprise. Capitalism stood astride the tattered husk of Soviet communism and the socialism of European fellow travelers, dupes, and operatives. The dissonance is profound, standing amid the artifacts of Reagan’s and America’s triumph when recognizing that in the short span of twenty-six years, a rube like Barack Hussein Obama should occupy the office of President and espouse the failed economic and social philosophies of the socialists that Reagan had soundly discredited and defeated. The same monolithic, establishment media complex that harangued Reagan now lauds the socialist buffoon Obama.

But, what struck me as most profound, among all the objects of Reagan’s revolution and unequivocal success, was a large rectangular slab of concrete covered in graffiti and erected in indisputable testament to the power of one man’s courage and conviction.

Behind the Reagan Library and facing the rear portico, a large segment of the Berlin wall stands, affixed by steel tabs to a concrete pad. Behind the approximately 4 foot wide and 11 foot tall slab, the vast typography of Simi Valley undulates, unhindered to the horizon. A photograph of President Reagan standing on one side of the slab and of Lech Walesa, who served as Poland’s President from 1990-1995, standing on the other side is on display just inside the doors leading out to the monolith. The photograph bears a plaque and this quotation:

“Whatever else history may say about me…I hope it will record that I appealed to your best hopes, not your worst fears, to your confidence rather than your doubts.”

Simply put, when America takes a stand, refuses to run from the empires of evil, dynasties of misery, murder, and oppression crumble before us. This is because our “best hopes” are for the promises of Liberty to us and to our posterity and our “confidence” is in the rightness of our cause and in the God in whom we trust. It isn’t complicated or sophisticated, much to the displeasure of big government bureaucrats and media stool pigeons who are only able thrive within fetid clouds of confusion, fear, and ignorance. Reagan’s success is to be found in the strength of his character and in the object of his faith. Subsequent to Hinkley’s assassination attempt, President Reagan said, “Whatever happens now, I owe my life to God and will try to serve Him in every way I can.” (Ronald Reagan Diary, March 1981)

Reagan’s faith was in the God whose promise is Liberty and in the America defined by the Constitution.

With this conviction, Reagan confronted the evil of his time, boldly named the enemy and set out to utterly defeat it. The result of this formula was success—the resurgence of global democracy. Obama’s policies of conciliation, withdrawal, and equivocation have resulted in the horrors of ISIS and a global power shift in favor of empire and oppression. When you do the simple arithmetic, it’s really easy to see how Obama is a failed president, and why.

“We know only too well that war comes not when the forces of freedom are strong, but when they are weak. It is then that tyrants are tempted.” Ronald Reagan, Republican National Convention, July 17, 1980

Though the future may seem bleak because establishment figures appeal to our worst fears and assail us with doubts, America is still a city on a hill waiting for her patriots to reclaim their shining heritage and to bathe the Republic once again in the golden light of Liberty. The Ronald Reagan Presidential Library still contains sacred embers, ephemeral sparks that are the residue of a life lived in the noble service of our miraculous birthright. If you are tempted to feel that patriotism is lost, that the future is dark, make the pilgrimage, if you are able, and touch your smoldering torch to the brazier of President Reagan’s legacy and watch as the Reagan revolution blossoms into flame once again.