How Kelsey Grammer's Personal Tragedy Argues For The Death Penalty 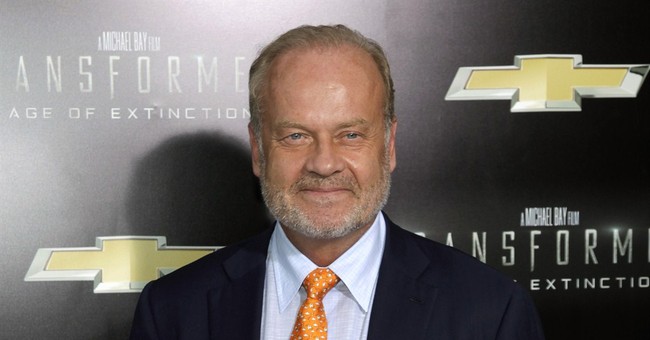 Countless souls have made the spectral walk to the gallows, have heard the dusty rasp of death’s mournful eulogy whispered odiously from his pale throat, “dead man walking.” The condemned have been hung by the neck until dead, shot, poisoned, decapitated, stoned, or clapped in an iron skull cap while 10 thousand volts of electricity boil the life from flesh and bone. But, this is justice, when delivered by legitimate authority. This is the only atonement that can be made to expunge a crime so black and abhorrent that its presence distorts and tortures nature and its order. Capital punishment is the final expression of retributive justice and it is the natural and inevitable conclusion of the grand aphorism, “eye for eye, tooth for tooth.” (Exodus 21:24; Deuteronomy 19:21)

Recently, well known actor Kelsey Grammer recently gave an interview to Mr. John Hilpern of Vanity Fair Magazine. Mr Grammer has suffered several profound tragedies during his lifetime, including the brutal rape and murder of his beloved sister Karen. Karen Grammer was abducted in 1975 by Freddie Glenn and Michael Corbett. These two soulless beasts began a killing spree by accosting Daniel Van Lone, a twenty nine year old cook. Glenn and Corbett originally planned to rob Van Lone but Glenn, moved by inhuman brutality, decided to shoot Van Lone in the head. Glenn then robbed the corpse of the sum total in his pocket—.50 cents. The next victim of this demented partnership was Winfred Proffitt, a young man of nineteen. Corbett had been training with bayonets in the Army and wanted to see what it would be like to bayonet a real person. So, with no regard for the laws of nature or of nature’s God, Corbett stabbed Proffitt with a bayonet.

On July 1, 1975, the loathsome Glenn and Corbett abducted Karen Grammer, who was then only eighteen years old, from the parking lot of a Red Lobster where she worked. They took her back to their apartment and repeatedly raped her. Glenn then promised Grammer that they would take her home. The pair drove Grammer to a nearby mobile home park and a placed a cloth cover over her head. As the petite Grammer exited the car, she was attacked by Glenn, who stabbed her in the throat, back, and hand. In a desperate effort to save her own life, Grammer ran toward a well lit porch but collapsed in front of the door, leaving a bloody hand print just below the door bell. Karen’s body remained unidentified for a week, until her shattered brother arrived to identify her pallid and brutalized remains.

Freddie Glenn was sentenced to death by gas chamber. However, the Colorado Supreme Court, in their infinite wisdom, overturned the state’s death penalty; therefore, Glenn’s death sentence was commuted to life with the possibility of parole. Freddie Glenn should have died in 1975, poisoned to death in the gas chamber. Instead, Kelsey Grammer has been denied the justice demanded by nature and by nature’s God, “but life shall go for life.” (Deuteronomy 19:21) He must confront the monster that threw away his sister’s life, like trash, each time Glenn is up for parole. Where is justice in that?

During Kelsey Grammer’s interview with Vanity Fair, he said that his sister’s death nearly destroyed him. He cites the murder and his feelings of helplessness as directly related to his former struggles with substance abuse. However, Mr. Grammer has come to terms with this horrendous event and found it possible to find forgiveness. But, even in forgiveness, Grammer instinctively gropes after the promise of natural law’s justice:

“But I believe the gift of life and freedom he took from my sister precludes him from ever being allowed to enjoy that gift for himself. He took her future from her with no regard for her whatsoever. He assumed he had a right to do so. He assumed she was his property, and that the precious gift God gave her was his to take.”

These few sentences, pregnant with anguish and hope, turn on the crux of death penalty jurisprudence. The argument for state sanctioned killing cannot be based on notions of deterrence, economics, or any other artifice. We are only intrinsically valuable if we are the creations of God, made in His image. If not, then we are merely bags of meat, and any death penalty discussion becomes moot. However, if we are made in the image of God, then we are of inestimable value, and murder becomes horrendous beyond all compensatory satisfaction. As is true of every fundamental tenet of American government and of jurisprudence, our foundations are built on principles drawn directly from the Bible. Without Biblical truth, we cease to be the land of the free and the home of the brave and this is why liberalism, progressivism, and marxists the world over seek to destroy Christianity and the Bible—the fount of liberty.

Mr. Grammer feels the influence of natural law as we all do; it is written in our DNA. You can hear it in how he describes his sister’s life, “that precious gift God gave her.” Whenever natural law is violated, a dissonance is created and we naturally seek to resolve it into a harmony. This is the science of common law. Historically, jurisprudes sought to discover God’s order in the chaos created by human sin and dysfunction. Cases involving real people, and their very real problems, were considered and compared. In the chaos of human dysfunction, barristers sought to discover God’s truth and equity where it was not revealed directly. We all seek to do the same thing when we observe circumstances that we just “know” aren’t right, and set about to make things right in the light that God has given us. The law that is written in our hearts teaches us that the only way to rebalance the scales of justice, in the matter of murder, is to demand that the murder’s life be forfeit.

Kelsey Grammer feels the invisible scales of justice distorted and, in his own way, attempts to rebalance them. In this poignant statement, “But I believe the gift of life and freedom he took from my sister precludes him from ever being allowed to enjoy that gift for himself,” he comes very near to agreeing with God.

The Bible speaks directly to the issue of murder, an unlawful killing, and provides the civil authority with only one remedy. The book of Genesis records the events leading up to a global, catastrophic flood that nearly extinguishes all life on the earth. Noah, as instructed by God, built an ark and, sealed inside by God himself, survived the great flood. When the waters ebbed and Noah and his family were finally able to leave the ark, God covenanted with Noah and issued a command which has been applied to civil government through the aeons: “Whoso sheddeth man’s blood, by man shall his blood be shed: for in the image of God made he man.” (Genesis 9:6) The Bible also records a long litany of ceremonial, dietary, ecclesiastic, and civil ordinances given specifically to the Israelites owing to their special relationship to God as His people and His representatives. Among those are commands dealing with familial affairs which demand that death be imposed on disobedient children. Some suppose that these passages preclude anyone from making a death penalty argument based on the Bible. However, this assertion is based on a lack of understanding of covenant in the Bible and of how God interacts with people and nations differently, but consistently, through the ages to bring to completion HIs plan of redemption. Simply, those things given specifically to Israel as a nation do not apply to us today as individuals or to the civil authority. And, these specific commands in no way abrogate the clearly defined principles that are found throughout the Bible, specifically with reference to the death penalty.

So, the Bible speaks in the Old Testament about civil authority possessing the power of imposing death, and the Bible speaks in the New Testament about legitimate civil authority possessing the same authority. Romans 13:4 states, “For he [the civil authority] is the minister of God to thee for good. But if thou do that which is evil, be afraid; for he beareth not the sword in vain: for he is the minister of God a revenger to execute wrath upon him that doeth evil.” The power of the sword is the power of life and death, and the Bible clearly gives lawful civil authority the right to act as a “revenger” and to “execute wrath.” The only argument that can be made for the death penalty is a Biblical argument. Either the civil authority has the right to impose death by specific command of God or there is no basis for the death penalty at all.

Kelsey Grammer has felt the brutal reality of murder close at hand. He has experienced the near madness caused by justice denied, as nature itself echoes the voice of God, “What hast thou done? the voice of thy brother’s blood crieth unto me from the ground.” (Genesis 4:10) Though Mr. Grammer has found a measure of personal peace in finding forgiveness, there is still a ponderous weight tipping the scales of justice and blighting the ground with unrequited blood. It is true that God is supremely merciful, but He is also supremely holy. There is always a consequence to be paid for sin. Consider this, Christ’s death on the cross was a death penalty execution. He sacrificed Himself as a lamb without blemish, and as a sheep dumb before the shearers. Through all the indignities, beatings, and tortuous scourging, He never denied the right of the civil authority to execute a sentence of death; He never denied that the power of the sword belonged to Pontius Pilate. Though the Roman governor was about to execute an innocent man, Christ never excoriated him for having usurped a power not his to command. Without His submission to the death penalty, the salvation of mankind would have never been possible. It’s hard to argue against the death penalty when The Savior Himself submitted to it, transforming it into the only propitiation for the sin of mankind.