Out of the Bunker 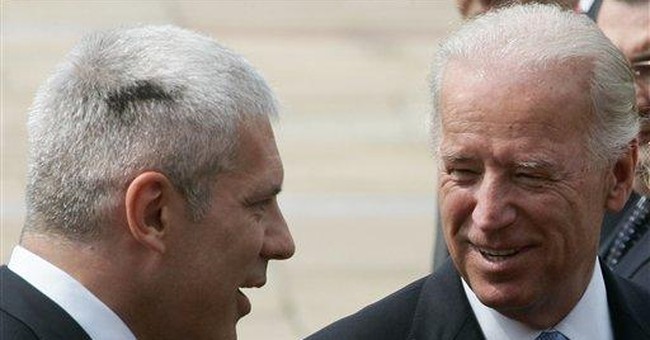 Traveling overseas is always risky for a vice president, especially this one.

Vice President Joe Biden late Tuesday was in Bosnia and Herzegovina to address the parliament, and the White House made certain to release his prepared remarks beforehand.

In the case of the gaffe-prone Mr. Biden, this obviously helps to explain in advance what he meant to say if indeed he ended up spouting something else - like disclosing U.S. sites for a strategic ballistic missile defense base in Europe.

Republican Rep. John L. Mica, who represents central and northeastern Florida, was obviously not happy to have missed three of the most recent roll call votes in the House, informing the speaker and entire free world for that matter that it was "due to mechanical problems relating to US Airways flight number 859."

Democratic Party whip Sen. Richard J. Durbin revealed this week that he relied on the gospels of St. Paul (so to speak) to steer him into public office.

The senior senator from Illinois recalled this week that it was his "good fortune as a young college student to work as an intern in the office ofSenator Paul Douglas," referring to the late Democratic senator, also from Illinois, who served on Capitol Hill from 1949 to 1967. He died in 1976 at age 84.

"It truly shaped my life and convinced me that public service was a good calling, and I was lucky, as I have said many times, to be inspired by the gospels of St. Paul - that would be former Senator Paul Douglas and former Senator Paul Simon - who showed me what I thought was the very best in public service in their honesty. Not only dollar honesty but honesty on the issues."

Inside the Beltway reader Jeff Johnson writes: "I noted your blurb about Mr. [David B.] Gergen quoting the Oak Ridge Boys at [Old Dominion University's] commencement last weekend. Now, showing my age of 29, I didn't know that those lines came from the Oak Ridge Boys, and I imagine many of the graduates didn't either.

"For those 35 and under, 'you don't have to go home, but you can't stay here' could easily be attributed to 'Closing Time' by Semisonic, a popular song used to close out parties when I was in school. It basically says to the slightly inebriated partygoer: 'There's the door, now use it.' Great memories. Thank you for the history lesson though."

The Government Accountability Office (GAO), in a new report obtained by this column on Tuesday, estimated that 87 percent of about 3,500 investigative reports that adjudicators used of late to make security-clearance decisions for Defense Department personnel were missing required documentation.

"We have a steamroller of socialism being driven by Nancy Pelosi and by Harry Reid, and it's being fueled by the administration and Barack Obama. The American people need to put a stop sign and speed bumps in the path of this steamroller."

-- Congressman and medical doctor Paul Broun, Georgia Republican, speaking to the nation from the House floor this week.