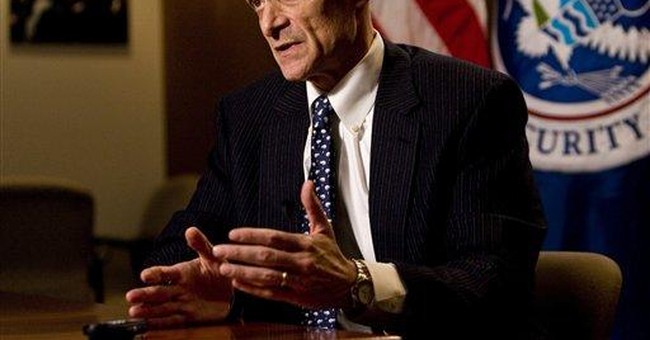 As five congressional panels held hearings in recent days on Mexican drug cartel violence and border security, former Homeland Security Secretary Michael Chertoff had one thing to say about legalizing marijuana in hopes of easing the bloodshed: "It won't work."

In a conversation with this columnist Saturday, Mr. Chertoff likened today's drug wars in Mexico to previous mob wars in America, which - he pointed out - didn't stop once Prohibition ended in 1933.

In 1986, it was Mr. Chertoff, as an assistant U.S. attorney working side by side with then-U.S. attorney for the Southern District of New York Rudolph W. Giuliani, who dealt a major blow to organized crime. As lead prosecutor, Mr. Chertoff's goal was to build a case against the five Mafia families that ran organized crime in New York. When the dust settled, leaders of the Genovese, Colombo and Lucchese crime families, as well as a captain of the Bonannos, were convicted.

Mr. Chertoff's final task as director of homeland security was seeing to the safe inauguration of Barack Obama. Still, he told one interviewer that despite all the security in place, his fear was a Virginia Tech-type incident in which one disturbed person goes on a killing spree.

Today, Mr. Chertoff is writing a book about his experiences and speaking through the Harry Walker Agency on topics that include terrorism, cybersecurity and economic infrastructure, the immigration crisis and emerging threats for the next decade.

Instead, President Obama accomplished all of the above, while Mr. and Mrs. McCain began their Saturday like other ordinary Americans.

"I was walking out of Starbucks, they were walking in," says Leslie Bauman, referring to the coffee shop in Crystal City. "They were both in casual clothes, and he was wearing a Navy hat, so I didn't even recognize him at first. But Mrs. McCain is absolutely gorgeous in person, and I recognized her immediately."

Mrs. Bauman, who works for the B.F. Saul group of hotels, says the couple were extremely gracious.

"They stopped and shook my hand," she says. "Then I thanked him for his service to our country and for being a voice for moderate conservatives. He asked what my name was - they were so kind and attentive, really genuine. I interned for my U.S. congressman all through high school and college, so I can tell when a politician is pretending to be interested and when someone is genuine."

It's St. Patrick's week in Washington, and Megan Smolenyak, chief family historian at Ancestry.com, assures us that President Obama and Vice President Joe Biden are both on the receiving end of some fine Irish blood.

Mr. Obama's Irish heritage can be traced back to the villages of Moneygall and Shinrone in County Offaly, Ireland. The president's third great-grandfather, Fulmoth Kearney, immigrated to America at age 19, landing in New York Harbor on March 20, 1850, and settling in Fayette County, Ohio.

Mr. Biden's Irish ancestors arrived in the United States within six months of Mr. Obama's family. Both men's relatives were shoemakers by trade.

He says he's decided against running for a U.S. Senate seat in Pennsylvania, but that doesn't mean he still can't act like a candidate.

Regarding our item of Friday about more Americans being issued U.S. passports - 16.2 million in 2008, up from 8.8 million issued in 2004 - Inside the Beltway reader Owen Jones of Atlanta writes: "Perhaps more and more Americans are becoming like pre-Castro Cubans, preparing to leave if the political/economic situation becomes intolerable."