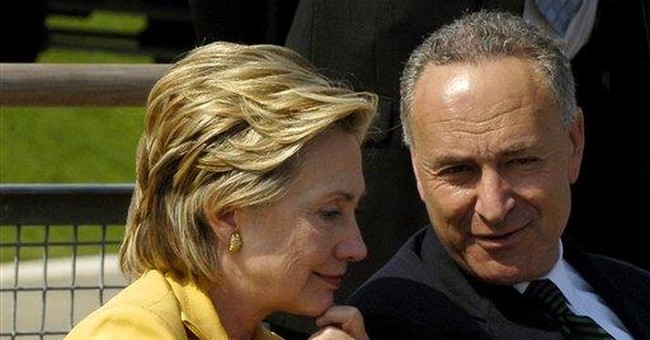 Sen. Hillary Rodham Clinton's 2008 bid for the White House was "the worst campaign ever," but don't look for the New York senator to disappear from the national stage.

So concludes leading Washington political and corporate consultant and pollster Frank Luntz, among the guests this week on "Inside the Beltway Radio," which premiered late last month and can be heard anytime by logging onto The Washington Times Web site, www.washingtontimes.com.

"It was the worst campaign ever," opines Mr. Luntz, who has consulted myriad national political campaigns over the years. "It was a disgrace."

On the same day as the Iowa caucuses, the Washington-based pollster points out, Mrs. Clinton was leading her opponent Sen. Barack Obama by 22 points nationwide, but then her "arrogance" and "viciousness" got the best of her.

Whether in business or politics, explains Mr. Luntz, "if you think you deserve it, you won't get it. If you think there should be a coronation, they'll pick somebody else other than you."

He says his consulting firm — Luntz Maslansky Strategic Research — examined the speech patterns of both Mrs. Clinton and Mr. Obama during the primary campaigning and determined the Illinois senator and now-presumptive Democratic presidential nominee issued a negative attack or statement almost every three minutes.

Mrs. Clinton, on the other hand, issued an attack "every 50 seconds."

Mr. Luntz, on the other hand, does not see Mrs. Clinton riding off into the sunset, anytime soon at least. In fact, the opposite is true.

"I've heard it said she could be a Supreme Court nominee; I've heard her talked about for attorney general, which I don't believe," he adds. "She could do in the Senate what Ted Kennedy did" after coming up short in the 1980 presidential primary, when he was the "expected nominee" like Mrs. Clinton.

"He went on to be a great senator," Mr. Luntz notes. "And make no mistake, she's not going away, and should Obama lose [either the presidential election or a potential re-election] she becomes the front-runner for 2012."

The pollster does not see her becoming Mr. Obama's vice presidential running mate.

Vice President Dick Cheney led a delegation of Washington VIPs to Tuesday's funeral for former North Carolina Sen. Jesse Helms in Raleigh, N.C., while all the voting in the Senate was halted for the day.

In a lengthy interview with Inside the Beltway as he prepared to begin his fifth and final term in the Senate, Mr. Helms was asked about some people calling him the nicest man in Congress, while others preferred labeling him a mean Republican "attack dog."

"I guess beauty is in the eye of the beholder," he simply replied. "No, the libs [liberals] don't like me."

Mr. Helms lived long enough to see Sen. Hillary Rodham Clinton fail in her 2008 bid for the presidency, which perhaps came as a bit of a surprise to the leading conservative lawmaker, given his infatuation with the first lady-turned-senator and her husband, former President Bill Clinton.

"Bill Clinton," he said during our interview, "could charm a bird out of a tree. Have you ever been in his company? Have you ever been in Mrs. Clinton's company? Nobody can be more charming than the two of them," he said. "We make fun of him all we want and disagree with him as I do on practically everything, but he can get up there and twist the facts around and look you right in the eye."

Seeing fewer tourists on the subways and in the museums?

"Two million fewer visited America in 2007 than in 2000," says the association, blaming U.S. security and entry policies and the associated hassles they present to foreign travelers.