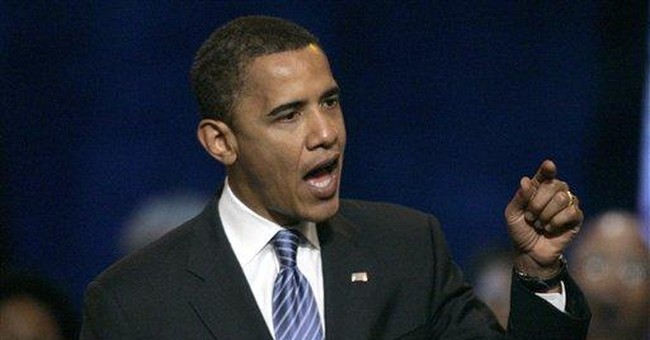 It appears a new generation of Americans living outside the ring around the nation's capital do not wish to defile their automobiles with political bumper stickers, let alone discuss politics.

Steve A. Brown, a Washington-area resident, writes to say that he has just concluded a 5,157-mile road trip to 13 Western states, during which he spotted a mere "five expressions in the form of bumper stickers. Four were for Senator [Barack] Obama and one for Bob Barr, the Libertarian candidate."

"I did not hear any discussion of the presidential election either," he adds. "If the people I encountered are a representative of the nation outside the Beltway, politics is not a staple. I did not hear anyone discussing District of Columbia v. Heller [the Supreme Court ruling invalidating the D.C. gun ban], Kennedy v. Louisiana [no death penalty for child rapists] or Boumediene v. Bush [constitutional rights for detainees]."

The Republican Party doesn't appear to be making any inroads in the political makeup of the historically Democratic District of Columbia.

Consider that as of the last Federal Election Commission reporting cycle, D.C. residents contributed more than $16.5 million to the various presidential candidates. More than $14.2 million of that total went into Democratic coffers, the remaining $2.3 million to Republicans.

Despite presidential polls of recent days giving Sen. Barack Obama anywhere from a 12 to 15 point lead over Sen. John McCain, one leading Democratic pollster's findings released this past weekend at the 2008 Aspen Ideas Festival give the Illinois Democrat "a slight" lead less than four months and counting until Election Day.

Asked specifically who they would support if the presidential election were held today, 47 percent of voters said Mr. Obama, with 42 percent backing Mr. McCain.

Interestingly, both Mr. Obama and Mr. McCain boasted nearly identical favorability ratings, 54 percent and 53 percent, respectively. Nonetheless, 51 percent of those polled indicated a preference for a Democrat, while only 35 percent care to deposit another Republican in the White House to follow President Bush.

It's being dubbed a "convention first" -- the entire 2008 Democratic National Convention simulcast gavel-to-gavel in Spanish for the approximately 35 million Americans who now identify Spanish as their primary language.

"We set out to bring down the walls and make this year's historic convention as inclusive and accessible to as many people as possible," explains Leah Daughtry, CEO of the Denver convention, to be held August 25-28.

Colorado-bound Democrats who demonstrate the highest level of commitment to offsetting their carbon footprint while attending the Democratic National Convention in Denver will receive special rewards, including priority seating on the floor of the Pepsi Center, announces House Speaker Nancy Pelosi.

Meanwhile, in order to save paper, the entire convention registration process is being handled online; 68 percent of the convention staff is currently walking, biking or taking public transit to work every day; and 100 percent of the Democrats' employees are using compact fluorescent light bulbs.

The long-deceased daughter of a 19th-century president has given President Bush with a unique present on his 62nd birthday, or so we learn from the White House pool report.

The birthday gift presented Sunday night is described as "a simple wooden box made from a giant oak tree that fell on the White House lawn in 2007 (planted by Benjamin Harrison's daughter in 1892): some of the wood had been sent to Texas to be fashioned into a small box (one and half feet by one foot) that was filled with notes and cards from members of his senior staff."