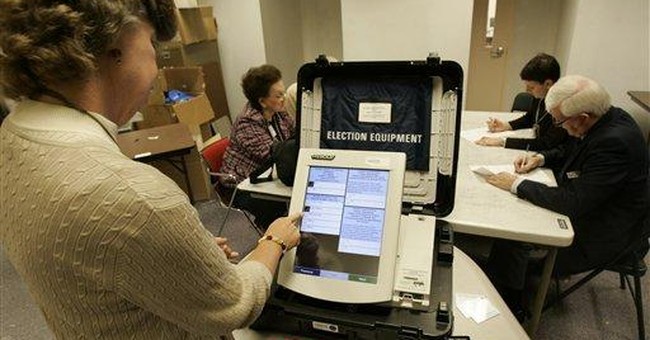 The FedEx delivery truck pulled up in front of this columnist's home over the Memorial Day weekend carrying a large heavy box that had to be turned sideways to fit through the front door.

I felt like "Mr. Parker" (the role personified by actor Darren McGavin in the 1983 film "A Christmas Story") when the large crate arrived at his house holding the infamous woman's-leg lamp sporting fishnet stockings.

Like the movie character, I tore into the box, anxiously tossing aside several layers of bubble wrap. Whatever it was, it was made of thick aluminum and it was big — as large as a suitcase. It had a handle and latches that, when opened, cause the entire ... well, whatchamajigger ... to unfold into an — er, mass of confusion.

"Property of Supervisor of Elections Palm Beach County Florida," the worn sticker on the outside of the contraption read. "Assembly Instructions Enclosed."

I start at the beginning.

"In front of you is an actual Votomatic voting machine used in Palm Beach County Florida during the 2000 presidential election," it begins.

As instructed, I placed the "suitcase" on the ground, opening both latches and then the lid. I next removed the aluminum poles from the underside of the top cover of the machine, in doing so unleashing hundreds of tiny "chads" that fell like confetti to the floor.

I assembled the poles (each pole is a leg made of two pieces), closed the lid and resecured the latches. Turning the thing over, I placed the four aluminum poles into the holes on the underside. Next, I carefully lifted the machine by its handle and flipped it over, opening the latches once again and raising the lid. I lifted the beige side flaps, slowly inserting the lid into the catches. Finally, I plugged the cord into an electrical socket.

Presto! Before I knew it, I had set up a Florida voting machine — a Palm Beach County polling station, folks — in my living room. In fact, it came equipped with three dozen now-worthless ballots from the Nov. 7, 2000, election in Palm Beach County.

"Voting Instructions. Step 1: Using both hands, insert the ballot card all the way into the vote recorder. Step 2: Be sure the two slots in the end of your card fit down over the two red pins. Step 3: To vote, hold the voting instrument straight up. Punch straight down through the ballot card for the candidates or issues of your choice. Do not use pen or pencil. Step 4: Vote appropriate pages. Legal time limit for voting is 5 minutes. Important notice to voters: be sure all holes are cleanly punched. Pull off any partially punched 'chips' that might be hanging."

Chips? I thought they were chads? Anyway, just for fun, I punch my hole for Al Gore.

The voting machine, I'm told in writing, is mine to keep (and hopefully to peddle on eBay). It was sent by HBO in advance of its film "Recount," which premiered Sunday night and examines the process that culminated in the U.S. Supreme Court decision in Bush v. Gore.

Now that Sen. John McCain has concluded his Memorial Day powwow in Arizona, we figured we would narrow down the presumptive Republican presidential nominee's list of potential running mates. What did we know?

John J. Miller, national political reporter for National Review and contributor to the Wall Street Journal — the American Prospect calls him "one of the brightest young thinkers on the right" — posted the following on NRO Weekend beneath the headline "King Him":

"I recently asked a prominent House Republican who should be McCain's running mate. His answer, without a moment of hesitation: Rep. Pete King of New York. The idea is that the election will hinge on Midwestern Catholic blue-collar voters of the type who reject [Barack] Obama, are willing to vote for Hillary [Rodham Clinton], and are of mixed mind about McCain. They'd love King, a 64-year-old pro-lifer who would connect with them far better than just about anybody else who is likely to end up on either ticket. He also supported McCain in 2000 and McCain values loyalty. So that's the theory. I'm not saying I'm for it or against it. But it was the most interesting veep suggestion I've heard in a while."

A Who's Who of Washington VIPs were on hand at the State Department when 87-year-old retired diplomat and Cold War-era arms-control negotiator Max Kampelman was presented with the Democracy Service Medal by the National Endowment for Democracy, headed by former Rep. Vin Weber, Minnesota Republican.

This afternoon beginning at 1 p.m., the Robert F. Kennedy Memorial, the Freedom Forum and Vanderbilt University will hold a public symposium on the life and legacy of Sen. Robert F. Kennedy, including the 1968 presidential campaign that Sen. Hillary Rodham Clinton has suddenly thrust back into the news.

The symposium, which lasts until 4:45 p.m., will be held at the Freedom Forum at 555 Pennsylvania Ave. NW. At 6:30 this evening, the Kennedy memorial will host the 2008 Robert F. Kennedy Book and Journalism Awards.