In 'Darkest Hour,' Churchill Refuses to Bend the Knee

John Kass
|
Posted: Dec 19, 2017 12:01 AM
Share   Tweet
The opinions expressed by columnists are their own and do not necessarily represent the views of Townhall.com. 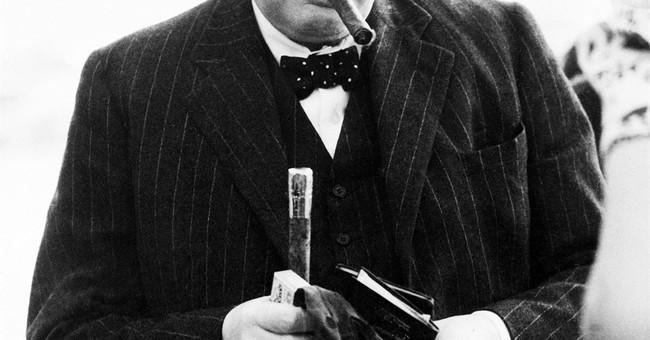 The two questions most people ask about a new movie are: Do I really want to see it? And, is it worth the price?

"Darkest Hour," the film starring Gary Oldman as Winston Churchill, is definitely worth seeing now, not later. It is worth the price.

And it is required.

Because in a West under siege, in a West -- particularly the European West -- that often seems lost and almost eager to capitulate to a diminished future, "Darkest Hour" isn't merely a good film.

It is a necessary film.

Heroes can be quite human, even dumpy and old and fat, egotistic and self-indulgent.

They may have lived lives of politics, which is to say lives of ambition, scheming and lies. They can drink and smoke and sleep in the afternoon.

Yet all that fades away when the time comes. It comes for everyone, and the core is revealed, if only to yourself, when you are alone.

But those times come for every nation, too, and it came for England with the British Expeditionary Force trapped at Dunkirk and Churchill's government pressing him to kneel to Germany.

What is required is an iron will, an epic stubbornness, a refusal to listen to reasonable voices that would reasonably help bend the knee.

In "Darkest Hour," and in the other films about Churchill that I've seen, there is a hint about where the iron will comes from: the expectations of the British aristocracy on the young; the severe schools, the punishments, the obligations placed on the ruling class to serve the empire.

In America, we infantilize our young, and some remain boys and girls until middle age, and we make heroes of athletes and actors and entertainers. But not in the England of that time.

For the aristocracy, the will was also molded by the kind of literature that helped shape the empire, which, along with the British Navy and its guns, reinforced Great Britain's place, ruling the seas.

It was the literature that reinforced all this in the minds of its ruling class, that they were the conservators of the West. And Churchill was a most literate man.

Many Churchill films -- including this one -- rely on the writings of the Whig statesman, Lord Thomas Babington Macaulay, to illustrate this point.

Oldman's Churchill recites from Macaulay while at his darkest hour, facing enemies and allies who want the nation to kneel because it would be the prudent thing to do.

"And how can man die better/ Than facing fearful odds/ For the ashes of his fathers/ And the temples of his Gods."

Others have pointed out one glaring false note in the film: Churchill reciting Macaulay while riding on the underground train, talking with the people about what they want to do.

But his admiration for Macaulay was not false. He devoured Macaulay as a young man. And Macaulay's version of Horatio at the Bridge is the story of England in World War II, the story of Winston Churchill in the London bunker in the dark with his whiskey and his cigar.

Why is Churchill so fascinating, even today?

He was a great orator, a fine writer, devious in the use of rhetoric, and all that -- plus his appetites -- make him a fascinating character.

But we have seen other fine orators, most recently, orators silky and smooth and beloved by modern mythmakers. And as the oratory fades, the blood and chaos of Libya and Syria overwhelm much of Europe.

He refused to bend his knee. He refused to listen to the voices of reason that told him appeasement with Germany was the prudent course to save his people.

And with his army trapped at Dunkirk, with the United States avoiding the war, with the United Kingdom exhausted, those voices of reason became even more reasonable, powerful and insistent.

If he had capitulated, and Germany took England, the United States could never have invaded France. Great Britain would have belonged to Hitler.

So the story is absolutely compelling. And the acting is so good, you forget Oldman is acting.

He should win an Oscar for his Churchill, the meatiest, most intimidating role for a British actor.

Brendan Gleeson did a great job with Churchill in "Into the Storm," although that film didn't have the budget of this one. Richard Burton and Albert Finney have played him, and Brian Cox has a new Churchill movie too.

Even the late Simon Ward, the actor cursed with a pretty Englishman's face, was excellent playing a callow youth in "Young Winston."

And Gary Oldman has the Oscar buzz now.

"You're asked to play who many would consider the greatest Brit who ever lived, an iconic British figure with all the ghosts of the other people who have played him," Oldman was quoted as saying. "I thought, I don't know what I could bring to it."

He brought himself. That was enough. And the filmmakers brought Macaulay.

Lord Macaulay isn't Churchill's alone. Macaulay greets me every morning at the Tribune tower, as one of his quotes is carved into stone above a door.

"Where there is a free press, the governors must live in constant awe of the opinions of the governed."

Do yourself a favor.